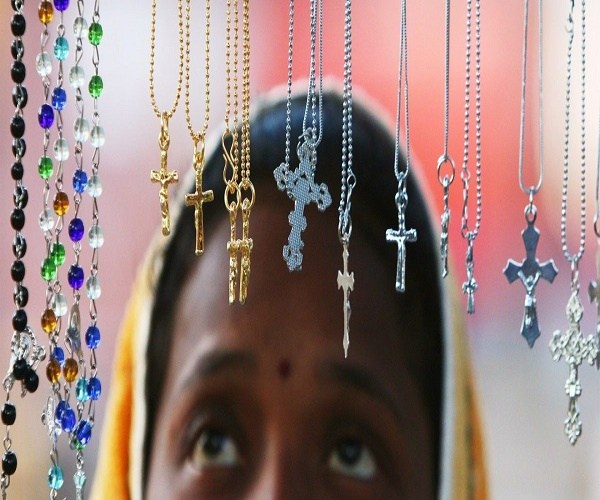 The image of Jesus on the cross is often seen in houses which are not Christian. Why does it attract people? When I left home the other day and made the short walk to the faculty building where I teach, the roads were strangely calm. Not seeing the usual morning jostle between e-rickshaws, I felt something must be amiss.

The only sound was the rustle of dry leaves on the ground, contrasted with the sight of new green leaves appearing on the trees. While I marvelled at the paradox of nature, it suddenly struck me that it was a holiday – Mahavir Jayanti.

The day marks the birthday of Tirthankara Mahavir, the 24th and last Tirthankara and the most revered figure for followers of Jainism. Do not injure, abuse, oppress, enslave, insult, torment, torture or kill any living being, he had taught. In happiness and suffering, in joy and grief, we should regard all creatures as we regard our own self.

How I wish we could inscribe these words on the election manifestos of all parties.

Despite being one of the layers of the ‘palimpsest’ that India is, as Jawaharlal Nehru described it, Mahavir’s following in the country is minuscule. According to the census, Jains form only 0.4% of the population. Yet, on his birthday, schools, colleges and other establishments are closed – a sign that the country owes him our collective gratitude.

Mahavir was christened ‘Vardhman’, which translated to ‘increasing’. While the number of his followers may not justify the name, his ideas have continued to grow. They resonated centuries later with another great thinker – Mahatma Gandhi.

Another holiday – and message – to remember
Walking out of the empty corridors of the faculty building, I remembered that there is another holiday this week – one that we would eagerly await when we were in school, Good Friday. Students of an Arya Samaji institution, the DAV Multipurpose High School, a majority of us were Hindus. If I remember correctly, there were no Christians in the school. In fact, in the small qasba of Siwan, I had not come across any Christians.

Good Friday! As children, we wondered why only this particular Friday was ‘good’. Much later, we learnt that the ‘good’ stood for sacred or holy. It was in 33 AD that Jesus was accused of blasphemy and crucified. A crowd demanded his death, and the high priests, elders and scribes together ordered his crucifixion.

The image of Jesus on the cross is often seen in houses which are not Christian. Why does it attract people? The answer came to me much later, when reading about Gandhi. I came across the story of his journey back to India after the 1931 Round Table Conference in London.

Pascal Alan Nazareth writes, “He had stopped in Lausane (to meet Romain Rolland), and in Rome where he visited St. Peters and the Sistine Chapel. Seeing a painting of the crucified Christ in the latter, he commented “What would not I have given to be able to bow my head before the living image of Christ crucified. I saw there at once that nations like individuals could only be made through the agony of the cross and in no other way. Joy comes not out of infliction of pain on others but out of pain voluntarily borne by oneself.”

The figure of Jesus remained engraved in Gandhi’s heart. Louis Fischer, Gandhi’s biographer, on his arrival at Sevagram Ashram in May 1942 to spend a week with him, noticed that there was “only one decoration on the mud walls of his hut: a black and white print of Jesus Christ with the inscription ‘He is our peace’.” He asked Gandhi about it, who replied “I am a Christian and a Hindu and a Moslem and a Jew….Looking at all religions with an equal eye, we would not only not hesitate but would think it our duty to blend into our faith every acceptable feature of other faiths.”

That was Gandhi. He regarded Jesus as his teacher and the teacher of humanity. Nazareth recounts that when criticised for his principle of trusteeship, he again recalled Jesus:

“The question we are asking ourselves today is not a new one. It was addressed to Jesus two thousand years ago. St. Mark has vividly described the scene. Jesus is in a solemn mood. He talks of eternity but is the greatest economist of his time. He has succeeded in economising time and space; he has transcended them. To him comes a young man, kneels down and asks “Good Master, what shall 1 do that I may have Eternal Life ? ” he then goes on to recount the answer that Jesus gave including his affirmation that “It is easier for a camel to go through the eye of a needle than for a rich man to enter the Kingdom of God.” and adds “Here you have an eternal rule of life stated in the noblest words in the English language….The strongest testimony in support of it are the lives of the greatest teachers of the world, Jesus, Mohammed, Buddha, Nanak, Kabir, Chaitanya, Shankara, Dayananda, and Ramakrishna. They all deliberately embraced poverty as their lot.”

Sermon on the Mount was as dear to Gandhi as the Bhagavad Gita. He went so far as to say that even if he forgot every word of the Gita and only remembered the sermon, he would derive as much joy.

ALSO READ:  The 'Dirty Politics' Behind 'Auction Of Properties' Donated To 'Tirupati Temple' In Andhra Pradesh

So it is only right that in India, the land of Gandhi, the day of Jesus’s crucifixion is a national holiday.

Attempts to bury Good Friday
The authorities of the union territories of Daman and Diu and Dadar and Nagar Haveli recently removed Good Friday from the list of holidays and put it on the restrictive list. Christians had to move the courts for its restoration.

The argument the UTs gave was that the number of Christians was insignificant in the territories, and therefore it was useless to make it a universal holiday. It is worth listening to the learned judges of the Mumbai high court who rejected this logic of numbers:

“Suffice it to state that the number of the members of a community should ordinarily not be the guiding factor in a multi-plural society. Christmas is celebrated with fervour by all and leads to integration of the nation. We find members of the society across caste, creed and religion celebrate Christmas. Similarly, the easter eggs, the chocolate bunny and the easter sweets are awaited by all and sundry across the country.”

Yes, all of us wait for them. But the mind that is bitter about them is now turning into the mind of the nation. There were attempts to make the holiday irrelevant through dubious means earlier too. It was not too long ago that the Chief Justice of India called a conference on a Good Friday. Justice Kurian Joseph objected:

“I may with deep anguish bring to your kind notice that such an important conference shouldn’t have been held when some of us, who are otherwise expected to be part of the event, are otherwise committed on account of the holy days when we have religious ceremonies and family get-togethers as well…Please don’t think that I am striking a communal note. Only since I see institution like ours, which are otherwise bound to protect the secular ethos and project secular image as per mandate of Constitution, are slowly drifting away from the constitutional obligations, I thought of putting this concern in writing.”

He also wrote to the prime minister expressing his inability to accept his dinner invitation on the same day. He wrote,

“Irrespective of religion, Diwali, Holi, Dussehra, Eid, Bakrid, Christmas, Easter etc. are great days of festival celebrations in the neighbourhood. Your good self would kindly appreciate that no important programmes are held during sacred and auspicious days of Diwali, Dussehra, Holi, Eid, Bakrid etc., though we have holidays during that period as well.”

He reminded the prime minister of his duty:

“..being the guardian of Indian secularism, I request your Honour to kindly have in mind these concerns also while scheduling events and benevolently show equal importance and respect to the sacred days of all religions which are also declared as National holidays.”

The then CJI responded to his fellow judge by accusing him of putting his individual interest over institutional needs.

Attempts were made in the early days of this government to turn Christmas into ‘Good Governance Day‘. But it was Manohar Parrikar, the chief minister of Goa, who in 2000 removed Good Friday from the list of holidays. This was even more shocking because the logic of ‘minuscule number’ does not apply in Goa. But he was celebrated, even after this pettiness, as a gentleman.

Gandhi again. Responding to the greeting he received on what was to be his last birthday, Gandhi quoted a poem,

The months of April and May this year are when we have to keep repeating these lines. #KhabarLive