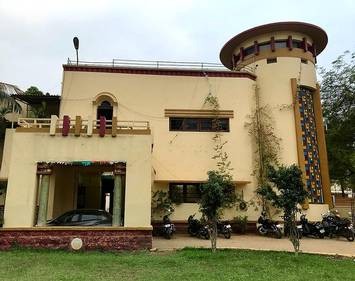 The art deco building designed by Mohammad Fayazuddin is now an integral part of Sarathi Studios
In the late 19th and early 20th century, Hyderabad became home to some of the most eclectic experiments in architecture as the royalty and noblemen were indulgent and willing. If Fakhrul Mulk gave a free run to architects who built the Erram Manzil and Erram Numa palaces, the Nizam, Mir Osman Ali allowed architect Vincent Esch to design Indo-Sarcenic masterpieces that dot the Musi riverbank. A little later, Maharaja Kishen Pershad carried on the tradition of experiments in architecture. Kishen Pershad was the Yaminus Saltanat (roughly, right-hand man) in the Nizam’s province and he met Mohammad Fayazuddin.

Fayazuddin, who finished a five-year course at Architectural Association School of Architecture, London in 1934, landed up in the city after a brief stint with the London County Council, and began working as a town planner. In the earliest phase, he began designing homes. He went on to design the State Bank of Hyderabad, Ravindra Bharati and a host of other iconic public buildings. But in the beginning, he drew up plans for dozens of houses across the city in Banjara Hills, Marredpally and Begumpet. Among the first was the house for Maharaja Kishen Pershad whose foundation stone was laid on February 4, 1936.The house went on to become one of the most photographed or rather picturised locations in Hyderabad.

The art deco building designed by Mohammad Fayazuddin in 1936 is the heart of Sri Sarathi Studios in the heart of Ameerpet. A portico, a flight of stairs take you to a small entrance with an arresting pattern on the floor. It is the inner organisation of rooms with a large anteroom for visitors, the smooth outlines, elegant geometric patterns, rounded edges, the staircase show how Fayazuddin used elements of art deco style to design this house. A house with the conveniences of a palace.

Sri Sarathi Studios is a venerable name in Telugu film industry and is connected with some of the earliest movies like Raithu Bidda, Atma Bandhuvlu, Kumkuma Rekha, Kalasi Untey Kaladu Sukham and others. Visitors, actors and workers barely give a second glance to the elegant two-storied structure that is at the heart of sprawling studio complex. “When it was purchased by the Challapalli Maharaja it was 11.5 acres in March 1956. Now it has shrunk to about seven acres,” informs an employee of the studio.

A house for Maharaja Kishen Pershad in Hyderabad
How a house turned into a studio and became the kernel of a film industry is the fascinating story of politics and pride. Before Sarathi studios, all the Telugu movies were made in Madras (now Chennai) and Hyderabad was known for Hindi movie releases. Then, the path-breaking Rojulu Marayi was released in Hyderabad and it went to mark 100 days. At the landmark event, the then Revenue Minister K V Ranga Reddy asked Telugu filmmakers to shift to Hyderabad and the house with the 11.5 acre plot was acquired by Challapalli Maharaja.

Two years later, the first movie made at the Studios Ma Inti Mahalakshmi, hit the theatres. The open space of Ameerpet turned into a hub of film making as actors, actresses, aspirants, and oglers thronged the location. The studio transformed the area with junior artistes, equipment suppliers, and wheeler-dealers moving into surrounding locations.

And when Annapurna Studios started functioning in the mid-70s, Ameerpet became one seamless extension of Banjara Hills. Endless anecdotes narrated by film actors and technicians are part of Telugu film lore about how Sarathi Studios shaped their careers.

“The studio is now being managed by MSRV Prasad. It is a preferred location for television shows, serials, post-production work, dubbing and every aspect of filmmaking,” says a an employee of the studio. #KhabarLive