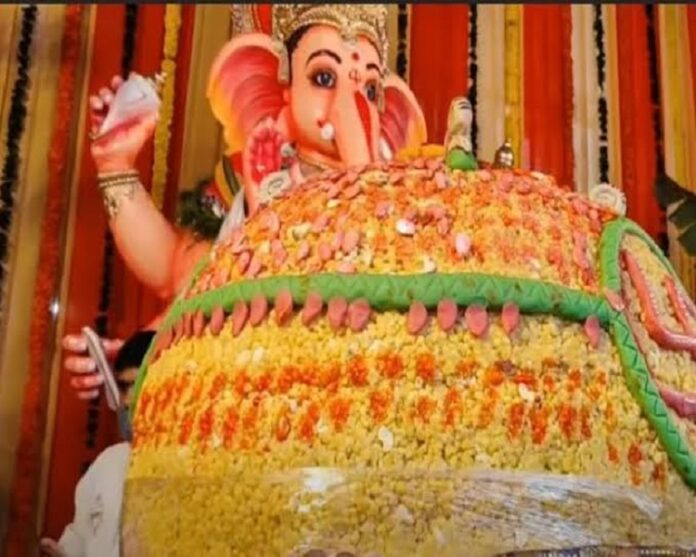 A huge laddu weighs 1100 kilograms offered to lord Ganesha on the eve of Ganesh Chaturthi at Khairatabad pandal in Hyderabad by a devotee. This is a record offering in the history of Ganesh festival in the state.

This year, the Khairatabad Ganesh in Hyderabad has received an offering of a massive laddu, weighing 1,100 kg, on the occasion of Vinayaka Chaturthi on Friday, September 10. The offering was made by J Tanay Rana and his family, who run an air cooler business in the city. On the same day, flagging off the Ganesh festival celebrations, Telangana governor Tamilisai Soundararajan participated in the Ganapati Puja at Khairatabad.

The Khairatabad Ganesh, which stands 40 feet tall this time, has been named as Panchamukha Rudra Maha Ganapati, with the goddess Kaala Nageshwari on the right and goddess Krishna Kaali on the left. Several devotees lined up to pray and give offerings to the idol on Friday. As a part of the ritual, the largest idol gets a huge laddu as prasadam every year. Since 2016, only one family has been offering the laddu to the Khairatabad Ganesh every year. However, with COVID-19, the ritual was halted in 2020, said J Srikanth, a member of the family which offered the massive laddu this year.

The laddu is usually distributed to the devotees on the fifth day of the festival, however this time, the date of the distribution has not been fixed yet. According to its devotee makers, this laddu can be preserved for 20-25 days.

The Khairatabad Ganesh is one of the largest idols that is installed during the festival of Vinayaka Chaturthi in Hyderabad. In the past, idols as high as 61 feet have been installed here, and are immersed with a large procession every year. #KhabarLive #hydnews