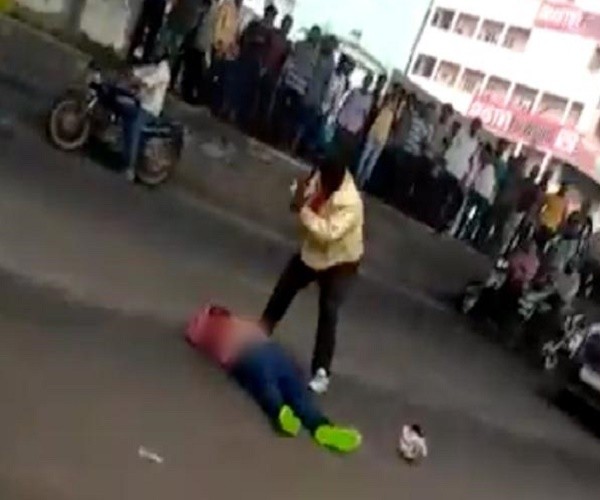 In a shocking incident, a man was hacked to death in public in Hyderabad’s Attapur road near Pillar 143 of the PV Narasimha Rao expressway in Cyberabad police limits. Visuals of the incident show the victim lying on the ground, being attacked with an axe 13 times in 21 seconds even as vehicles pass by. The assailant must have hacked the victim multiple times before that, as the video begins with the bloodied victim lying on the road.

Both the assailant and his accomplice are reportedly history-sheeters. The victim, identified as 35-year-old Ramesh, is apparently an accused in a murder case in Shamshabad. He is an accused in the murder of a man named Mahesh Goud along with four others. Ramesh was reportedly returning from a court on Wednesday, when he was attacked by four people, said to be Mahesh Goud’s relatives. Prakash Reddy, the Deputy Commissioner of Police, Shamshabad told #KhabarLive that Ramesh and Mahesh who had been neighbours developed enmity over a woman.

The assailant, after hacking the victim to death, can be seen pumping his hands in the air and striking the pose of victory. A police vehicle pulls up, but no one can be seen getting out of the vehicle.

A second video, which has been shot from the other side of the road right after the assailant celebrates after hacking the victim, shows the assailant walking towards an accomplice in a blue shirt. The assailant then throws down the axe next to the victim who lies dying in the middle of the road. The accomplice then walks around the victim, picks up the axe, threatens the dying man and walks away nonchalantly. A police vehicle, which was seen in the frame in the previous video while Ramesh was being hacked, can be seen driving away and the assailants are seen casually getting ready to sit on their bike and leave the spot.

This is how it seems to have begun with the two guys after the victim. #hyderabadhorror pic.twitter.com/drQVlh1wjw

(Warning: The visuals are disturbing. Viewer discretion is advised.)

According to DCP Prakash Reddy, the police vehicle had plain clothed policemen who could not stop the car immediately because of a traffic block. When asked why they did not get down even when they could see the attack in front of them, the DCP said that they would closely look at all the videos and investigate. However, he added that the assailant and his accomplice were arrested by two policemen who were inside the police car. “They parked the car a little ahead, came back and arrested the two men,” the officer told #KhabarLive.

This is the second such incident to have taken place on a busy road in Hyderabad in less than 10 days. Madhavi and Sandeep, an inter-caste couple were hacked by Madhavi’s father, Manoharachari in broad daylight in Erragadda. Madhavi sustained grievous injuries in the hacking.#KhabarLive