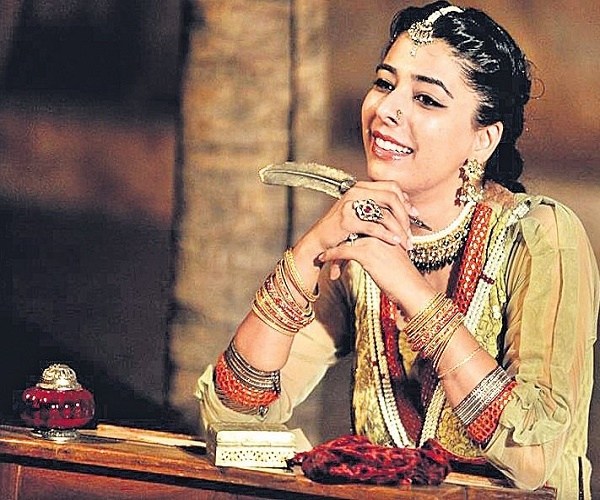 Beauty and brains, fame and fortune – she had it all. Poet, singer, dancer, musician, philanthropist – all rolled into one. Mah Laqa Bai Chanda was a hidden volcano of talent. But, she is remembered more for being an accomplished poet. Opinion, however, differs whether she was the first or the second female with an anthology of poems.

Recent research shows that she was the second sahibaan-e-divan (woman poetess) of Hyderabad Deccan to have her works published – the first one being Lutfunnisa Imtiaz. Many believe this 18th century poet was a courtesan during the Nizam era. Here again, some scholars like Naseeruddin Hashmi and Rahat Azmi beg to differ. They feel she is being wrongly labelled a tawaif when she was actually a pious lady and a consummate artiste whose mother fell on bad times and perforce took to dancing and singing for survival.

From both paternal and maternal sides, Mah Laqa had a very respectable and noble lineage. Her father, Bahadur Khan, served as a mansabdar (military official) in the Mughal Emperor Muhammad Shah’s court and was given the title ‘Basalat Khan’ while her mother, Meda Bibi (who later adopted the name Raj Kunwar), was a beautiful courtesan of Rajasthan.

There is a lot of confusion about the name of this poet. Her real name was Chanda Bibi while Mah Laqa was the title conferred on her and Chanda was her taqqalus (pen name). And the suffix, Bai, denotes the turbulent times her mother, Raj Kunwar, and the latter’s sisters, Noor Bibi and Pulan Bibi went through. In 1160 when they migrated to Aurangabad from Rajasthan and decided to live here, they were faced with a livelihood issue. Left with no option, they reluctantly took to music and dancing. However, Raj Kunwar and her elder daughter, Mehtab Kanwar, were kept away from this profession by her sisters.

There are, however, no two opinions about Mah Laqa being very influential with the Nizams and was counted among the omarah (highest nobility). When societal mores looked down on women in public life, she took the centre stage and left an indelible mark as a poet and dancer.

Born Chanda Bibi, she was conferred the title of Mah Laqa by Nizam Ali Khan, Asaf Jah II. Meaning beautiful as moon, the title indicates the ravishing looks of Chanda Bibi. Her winsome beauty and coltish charm lit up the fabulous courts of the second and third Nizams. The then Prime Minister, Nawab Rukn-ud-Daula, took personal interest in her upbringing. Best of teachers were appointed to educate her and this is clearly reflected in her later day shayeri. She also received training in martial arts and excelled in horse riding, sword fighting and archery.

With her stunning looks, melodious voice and ready repartee, she made a name for herself both in the masses and the classes. Not just the Nizams, a host of powerful nobles were smitten by Mah Laqa’s charm and pined for her love. Today, she is an unforgettable part of Hyderabad history, thanks to her distinct accomplishments.

Well-versed in Persian, Arabic, Urdu and Braj Bhasha, Mah Laqa had a well-stocked library and spent a lot of time reading books. Her multifaceted personality impressed Nizam Ali Khan so much that he associated her with his court. She even accompanied him during wars dressed in male attire. Pleased with her inherent talent, Nizam granted her huge jagirs in different parts of Hyderabad – Chandanagar, Hyderguda and Adikmet. Though she had no dearth of admirers, Mah Laqa remained a spinster throughout her life. In one of her couplets, she says:

Mah Laqa was very conscious of her high status and kept distance from lesser mortals. This much is clear from her verse:

At the same time, she was ever ready to render succour to the poor and needy. She befriended poets and hosted them at her home. The fact that her jagir at Adikmet now has given way to the Osmania University and her house in Nampally is home to the Girls Junior College shows her love for education. Her gracious and friendly nature comes through this couplet:

Mah Laqa was a contemporary of poets like Mir Taqi Mir, Mirza Rafi Sauda and Khwaja Mir Dard in the North and Sher Mohammed Khan Imaan, Mohammed Siddiq Khais and Chandulal Shadan in Deccan. Deeply influenced by Sufi poet Siraj Aurangabadi, she penned ghazals and nazms on different topics. Her poetic compositions were posthumously published under the title Diwan-e-Chanda. They provide insight into the linguistic transformation taking place in southern India.

Though her anthology comprises just 629 couplets, she manages to express and interpret a whole range of human experiences. The intensity of thought and profound truths of life conveyed in the verses make them stand out. A staunch feminist, she adopts terminology and proverbs specific to women to give vent to her feelings. Sample this verse:

Mah Laqa has penned a good number of romantic verses. Here again, her style and approach are unique. See how beautifully and sensuously she captures the parting moments between lovers:

A devotee of Hazrath Ali, she wrote nearly 120 verses in his praise. As in life so in death she chose the hillock at the Moula Ali shrine to be the final abode of her mother and herself. #KhabarLive