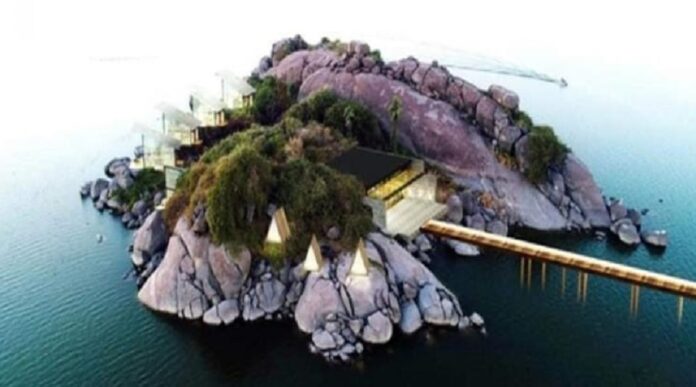 The Telangana second capital Karminagar ready to create their’ KCR Island’ to boost tourism, has come up with a proposal to develop this Island on Lower Manair Dam vicinity, a few minutes away from the main city. Officials, along with state minister Gangula Kamalakar, visited the site to explore the detailed project plan and design.

A natural hillock formed with massive rocks amidst a reservoir will be the site for the upcoming tourist spot with scenic setup of gardens and eco-friendly manufacturer if all goes as per plan.

The officials believe that this is going to be a center of attraction and change the face of the city.

Under the Karimnagar City Renovation Programme, Municipal Corporation authorities are making arrangements in this regard. Kaleshwaram Lift Irrigation Scheme, which has created scores of natural resources and scenic spots giving scope to develop the region in the tourism sector.

According to local MLA and State Minister for BC Welfare and Civil Supplies Minister Gangula Kamalakar a ‘Detailed Project Report (DPR)’ has been submitted to the state government, he said that works of the project will take off as soon as approval and tender procedure.

Reports suggest that the project is estimated to cost around Rs 20 crore project promise.
The Minister said that the island project was part of several initiatives to ensure that Karimnagar emerges as a major tourism destination in Telangana’ .

He said the decision to develop ‘KCR Island’ was taken since water would be available all throughout the year given the availability of water resources of KLIS.

The Maisammaguda hillock, on the island in the middle of LMD, has been identified for development under the project.

The project design work was given to a Bengaluru-based architecture firm and the company representatives have already visited the spot and approved it.

The amenities will include an entrance lobby, checkpoint, glass banquet hall, meditation hub, and premium suites along with cottages with Indonesian architecture and a floating restaurant with the capacity to seat 40 persons.

Karimnagar IT park, which recently came up as part of state governments’ push for investment in the Information Technology (IT) sector in tier-two cities in the state, has already created a flutter in the city. #KhabarLive #hydnews