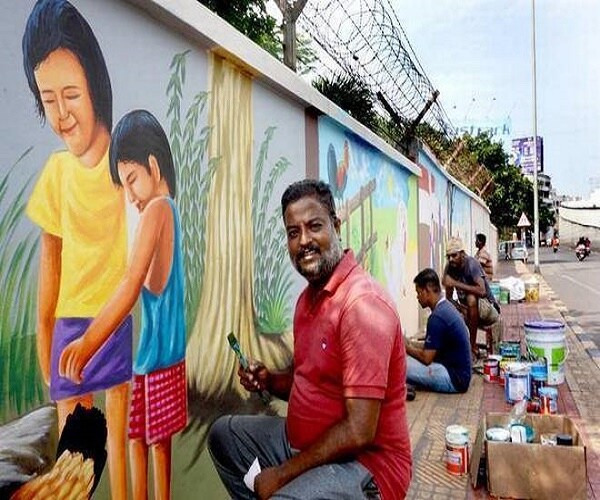 While B Vijay Kumar is enjoying the appreciation he is getting for his street art, he says there is not much joy in his regular job of painting residential buildings. If you have been observant, you would have noticed the 9, 900 square feet of wall space near the Telugu Talli Flyover. It has had a makeover with colourful images on it.

Of the countryside, some animals and of two boys on a boat looking at their reflection. You see them the right side after crossing the Telugu Talli Flyover going to the railway station. It took B Vijay Kumar and his team of 30 to transform the drab, nondescript wall into a splash of colour that no one can ignore.

They were hired by contractors from the Visakhapatnam Metropolitan Region Development Authority State (VMRDA). Forty-year-old Vijay is thrilled. “It is a good feeling when people stop and thank us for our work. This is the first time I have received such a big platform to paint.”

Vijay usually paints residential buildings. The real estate sector is where he makes his living and where he will go back once this wall is done. Vijay feels bad that he doesn’t often get a chance to show the art that is in him. He says about a couple of decades ago, there was a great demand for people like him. But once flex printing came in, the market forgot about professionals like him.

“That was the moment when our skill was devalued in the market. We were no longer considered as artists but as painters who were only fit for white-washing ,” he says sadly. He reiterates that it takes a certain skill to do his kind of art. “All we need is an image and we can replicate it on a canvas of any size.”

Discontinuing his studies after his tenth, Vijay says he got his first jon in 1997 when he had to paint advertisements for Kamdhenu Milk products. “Earning money at such a young age persuaded me that I did not need education and that I wasmy own master.” But he says he was wrong and decided then and there he would never ask anyone to quit school. “Many young people come to me looking for odd jobs. But I always explain to them why they should focus on their education first.” His one mission in life now is to ensure his children are properly educated.

“I have explained to my children that there is a time for everything. Now is the time to study. Don’t run behind money, it will follow on its own once you are well-educated.”

Vijay made several attempts to rejoin school, but for one reason or the other he couldn’t. “By that time, I was supporting my family. But more importantly I feared going back to school; so I continued what I was doing,” he says.

While projects lke the Talli Flyover make him happy, Vijay says his regular job is increasingly getting hazardous. “Every few years, the buildings we work on get taller. We work without any protective gear or insurance,” he says. “Another big nuisance is the increase in motor vehicles. In our workspace, there is no escaping vehicular emissions and the constant honking.” #KhabarLive