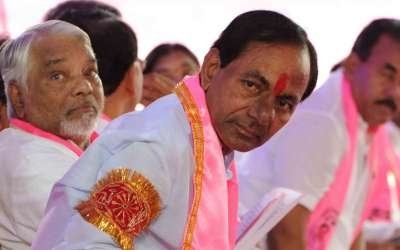 Telangana CM and TRS supremo K Chandrasekhar Rao (KCR) is a man known for setting his goals high. Figuring that the ‘Modi magic’ of 2014 has all but vanished and has not been replaced by a Rahul Gandhi upsurge, KCR is fancying his chances as the next prime minister of India, suggest highly-placed sources.

For the last fortnight, KCR has been talking about a federal front of non-BJP, non-Congress parties, asserting that both the mainline parties have failed the country.

An ‘Over-Confident’ KCR
Donning the robe of a messiah, KCR has been announcing that ‘people are vexed that there is no qualitative change, even after seventy years of democracy.’ KCR, as has been reported, travelled to Kolkata to confabulate with West Bengal Chief Minister Mamata Banerjee for forming a federal front. He has also met CPM’s Sitaram Yechury with the same idea.

Although Telangana has merely 17 seats in the 545 strong Lok Sabha, KCR avers that his chances are bright because of many factors. Firstly he has, by political manoeuvring, decimated the Opposition in his own state of Telangana. Telugu Desam Party (TDP) which had 13 MLAs, is now left with two.

The Congress’ ranks have also been depleted, what with 7 Congress MLAs defying the party whip last week in the Rajya Sabha election and voting for the Telangana Rashtra Samiti (TRS) candidates.

Even as Congress leaders are complaining about the ‘mind games’ being played by KCR, the TRS supremo is unfazed because he is confident of sweeping the polls in 2019. While the BJP in the state is a non-starter (in spite of a few visits by national President Amit Shah), being able to sweep the state and becoming the federal front PM consensus candidate is quite a different matter.

The leaders of many likely federal front partners with more seats (like Mamata with 42 seats in West Bengal) might harbour prime ministerial ambitions themselves. But KCR, with his proficiency in both Hindi and English, and being from south India, feels that he has an edge over others.

KCR — the Father of ‘Modern Hyderabad’
In February 2015, barely months after ascending the throne, KCR’s cops were able to catch a TDP MLA red-handed while trying to bribe an independent MLA to vote in favour of the party in the (then forthcoming) legislative council election. Even as the TDP MLA was jailed, a tape was produced (and leaked to TV channels) where a voice suspiciously similar to that of Chandrababu Naidu, was found saying something incriminating.

Though Naidu was not booked, he shifted to Vijayawada in Andhra Pradesh soon thereafter — along with the whole Andhra Pradesh Secretariat. This, after saying all the while that he would not leave Hyderabad before the mandatory 10 years for which the city would be the common capital. This was an opportunity for KCR’s Telangana Rashtra Samiti (TRS) to poach on TDP MLAs who were told by Naidu to fend for themselves.

At the same time, to ensure that Andhra industrialists did not flee to Andhra Pradesh leaving Hyderabad high and dry, KCR appointed his son KT Rama Rao (KTR) to woo them. The savvy KTR, who is IT and Urban Development Minister in KCR’s government, was able to win the confidence of these industrialists who were at the receiving end during the Telangana statehood movement.

Naidu is hailed as the father of modern Hyderabad, who got Microsoft and other IT investments. But KTR is following his footsteps and has been able to woo many others. “Hyderabad is a boom town now,” is the refrain of investors.

A Colourful Political Career
KTR is being projected to takeover as chief minister once KCR migrates to national politics. Realising that Telangana has no asset other than Hyderabad, KCR and KTR want to expand the city to allow more investors and enhance ‘Brand Hyderabad’. The cost of land in Hyderabad is still lower than in Chennai and Bengaluru, which is why many IT investors are attracted to the city. With Bengaluru’s infrastructure now under great stress, the father-son duo perceive that Hyderabad can become the next Silicon Valley of India.

KCR has had a chequered political career. A faithful follower of Telugu Desam founder NT Rama Rao, he was later transport minister in Chandrababu Naidu’s TDP government in Andhra Pradesh from 1995-99.

Although he is believed to have strategised Naidu’s victory in 1999, Naidu jettisoned KCR relegating him to the post of the Assembly’s deputy speaker. A miffed KCR left TDP and formed TRS to fight for a separate state.

The new state was created by Sonia Gandhi on the eve of the 2014 elections. Before Telangana was announced, KCR had declared his allegiance to Sonia — who he said was like his own ‘mother’ and even promised to merge his party into the Congress if ‘he was given a free hand.’ But none of this happened, and the TRS and Congress are now arch enemies.

People’s Faith in a ‘Wily’ Politician
Even as KCR wants to decimate the Congress, analysts aver that he has a tacit understanding with the BJP because this is what the saffron party also wants. However, in April 2017, KCR got a bill passed in the Telangana Assembly to provide reservations to backward Muslims in colleges and for jobs.

This is unlikely to be notified by the central government, because reservations on religious basis have been struck down by courts. Moreover, with the latest proposals total reservations will go way beyond the constitutionally mandated upper limit of 50 percent.

KCR, who runs the state with an iron hand and has promoted his daughter and nephew besides his son, is seen as a wily politician with a clear game plan in mind. This is why, he is being taken seriously as he unfolds the federal front plan. #KhabarLive