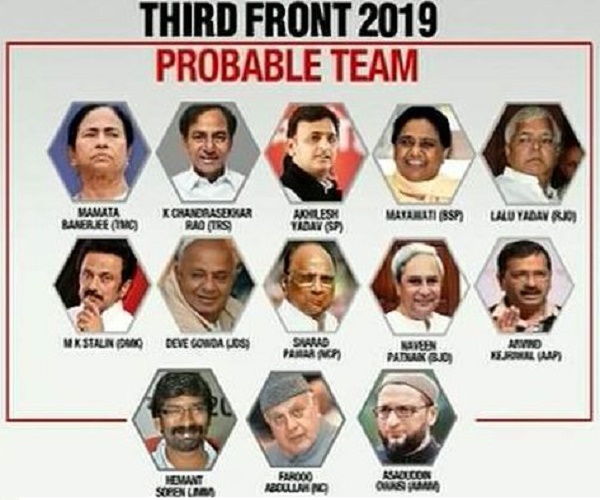 Going by the political developments over the past 48 hours, an effort to forge a front comprising various regional parties together is definitely on.

Is there a new non-BJP, non-Congress front in the making? Going by the political developments over the past 48 hours, the efforts to stitch a front comprising various regional parties is definitely on. The BJP’s inroads in the north-east came as a catalysing factor for some parties, which had only been dropping hints until now, to renew their efforts for such a political formation.

Soon after its victory in Tripura, BJP president Amit Shah declared that his party’s golden era would begin only when it gets West Bengal, Kerala and Odisha. Hardly a day had passed since Shah’s announcement, the Trinamool Congress (TMC) chief, Mamata Banerjee, retorted with her own battle cry. “Some are saying that their next target is Bangla (West Bengal). If that is the case, our target will be Delhi’s Lal Qila. So, let’s march to Delhi,” she said with a stronger vigour.

Banerjee has been playing with the possibility of an anti-BJP “federal front” for a while now. She has frequently been taking one of the strongest positions against the BJP, and at the same time been in good terms with the Samajwadi Party (SP), the Biju Janata Dal (BJD), Rashtriya Janata Dal (RJD), Aam Aadmi Party (AAP) and also the Congress for a stronger opposition to the Modi government’s policies. Occasionally, when she is spotted with leaders belonging to any of these parties, rumours of an alliance naturally fly.

However, this time around, such an alliance look much more in the offing than ever before, more so because Banerjee has got company now. Her open challenge to Shah came almost simultaneously with Telangana chief minister K. Chandrasekhar Rao of the Telangana Rashtra Samiti (TRS) expressing his desire to enter national politics. More importantly, through an anti-BJP, anti-Congress front. He announced that he was planning to organise consultations with various parties and former bureaucrats to advance the idea of a “qualitative change in national politics”.

Taking a cue, Banerjee immediately extended her support to Rao, and surprisingly, so did Asaduddin Owaisi-led the All India Majlis-e-Ittehad-ul Muslimeen (AIMIM) and Hemant Soren-led Jharkhand Mukti Morcha (JMM). Many other small parties, too, have supported the Rao’s call.

Around the same time, the two arch-rivals in Uttar Pradesh – Bahujan Samaj Party (BSP) and Samajwadi Party (SP) – came together for the upcoming Lok Sabha by-polls, when the former declared its support for SP’s candidates in Gorakhpur and Phulpur, vacated by Adityanath, now the chief minister, and his deputy, Keshav Prasad Maurya, respectively.

Down south, the Janata Dal (Secular) led by former prime minister H.D. Deve Gowda too has tied up with the BSP to contest the upcoming Karnataka assembly polls against both Congress and the BJP.

While an alliance may take much more than these developments, what is significant is that a majority of big non-Congress, non-BJP regional players have opened channels to talk to each other. This has paved the way for these forces to come together. Except for the BSP and SP, none of these parties are directly pitched against each other in any of the states. With the arch rivals in Uttar Pradesh sending friendly signals to each other, the prospect of an alternative formation suddenly looks real.

While the BJP sounds confident about taking on such an alliance with ease, it cannot deny that the continuous infighting within the saffron party-led National Democratic Alliance (NDA) has amplified the noise around a possible anti-BJP coalition. One of the most important allies in the BJP-led National Democratic Alliance, the Telugu Desam Party led by N Chandrababu Naidu has publically been sending negative feelers to the BJP recently. Ever since union finance minister Arun Jaitley presented the budget in February, the TDP has been resenting against centre’s reluctance to grant special financial packages to Andhra Pradesh, which was made to split with Telangana in 2014. The party has since been raising its voice against the Modi government and hinting at the possibility of a break-up with NDA.

Both BJP and the Congress have tried to woo the TDP but, at the moment, it has kept all doors open but its disenchantment with the BJP is there for everyone to see.

Similarly, although it looks improbable that the Hindutva hardliner Shiv Sena would be a part of such an alternative formation, the Uddhav Thackeray-led party’s decision to go alone in 2019 general elections has also added a new dimension to the growing the anti-BJP space. Over the last two years, Shiv Sena has upped its ante against the BJP, especially on the Centre’s neglect of Maharashtra-specific issues concerning farmers.

Together, these regional parties constitute a substantial section in the Lok Sabha currently. They can play a significant role in case none of the national parties is in a position to form a government on its own in 2019 parliamentary polls. In case of a hung verdict, the alliance can claim leadership too, on the lines of the United Front government in the 1990s.

But at the moment, it would be too far-fetched to predict its importance because much will change before that, especially with four big states – Karnataka, Rajasthan, Madhya Pradesh and Chhattisgarh – going for assembly polls this year.

Party insiders told The Wire that its leadership has not taken any concrete position yet on such an alliance as it hopes to do well in the state elections. “If we manage to win some of these big states, the political equations will change. BJP’s core areas of strength is north India. If we manage to break into this territory, 2019 general elections will look much different from now. In all the four big states, the Congress is directly placed against BJP. The regional parties will have no role to play,” a senior Congress leader said on the condition of anonymity.

The leader was of the view that there was no need currently to respond sharply to the call for a front independent of even the Congress. “If the party performs well in the state elections,” he said, “the regional parties will be forced to take a different look at the Congress.”

He added that the party may have ignored regional parties of late but they understand that they are better positioned under a Congress rule than an “authoritarian” BJP government. “Our real conversations with regional parties would begin after the state elections are over. The possibilities of the probable regional alliance supporting us or vice versa can only be concretely discussed after the parliamentary polls, depending upon the results.”

As of now, however, the party has left its doors open for talks. It has increased its engagement with regional players and intends to play a role – which is not concrete yet – in such a coalition before 2019 polls. Sonia Gandhi’s dinner invitation to opposition leaders on March 13 is being seen as the grand old party’s the most recent friendly overture.

Indeed, much of what the Congress leader said sounds plausible. The crux of the disenchantment of regional parties with the Modi government is a sustained attack on federal concerns. BJP’s constant push for a national narrative of development has invisibilised the state-specific concerns, historically raised by the regional parties.

The non-NDA state governments over the last few years have frequently complained about a high-handed approach in handling federal matters, despite Modi government’s much-touted mantra of co-operative federalism. At the same time, the governors appointed by the centre have often found themselves in conflicting positions with state governments. As a result, the demand for greater autonomy to states has grown and reflects in the call for a non-BJP, non-Congress alliance.

Although the Left Front does not figure in the talk of an independent coalition as yet, the need for an alternative coalition has been its long-standing demand. Regional parties aligned with NDA like Janata Dal (U), Shiromani Akali Dal (Badal), Jammu and Kashmir’s People’s Democratic Party (PDP), and now TDP, too have voiced their demand for greater powers often. Similarly, independents like BJD or Tamil Nadu’s All India Anna Dravida Munnetra Kazhagam (AIADMK) or Congress’ allies like Dravida Munnetra Kazhagam (DMK) and RJD, all at some point decried the Modi government for infringing upon state powers.

Consequently, there is a growing feeling among regional parties that the BJP’s PR-driven national narrative, oiled by huge resources, is actually aimed to wipe them out from their respective states in the long run. The neglect that non-NDA parties have faced under the Modi government has already been crippling the parties, both politically and financially.

With Congress having lost much of its power in national politics, the regional parties’ attempt to float a front of their own is indeed about challenging BJP’s hegemonising tendencies. What else explains Mamata Banerjee’s symbolic support to her arch-rival Communist Party of India (Marxist), which has been protesting against a series of attacks on its workers in Tripura, allegedly perpetrated by BJP workers following the saffron party’s victory in the state. Or the TRS and TDP showing friendly gestures to each other.

V. Krishna Ananth, senior political commentator and author of India Since Independence: Making Sense of Indian Politics told The Wire, “Indian political history has always been witness to such coalitions, which were formed to break one party’s monopoly. The Congress monopoly over Indian politics was broken in 1967 by a larger coalition, which included BJP’s earlier avatar, the Bharatiya Jana Sangh. From then on, we saw many such coalitions to challenge the Congress’ monopoly.

It was only in 1996, after the demolition of Babri Masjid, we saw a United Front against the BJP. Congress was also a part of this. Between 1996 and 2014, you had two broad fronts, one led by the Congress and the other by BJP. Now in 2018, when BJP is unprecedentedly dominant, such an alliance looks naturally imminent. It is actually like going back to 1967. Many leaders of India, like Jayaprakash Narayan, Charan Singh, V.P. Singh and so on shot to national limelight in such political churnings.”

“The point is that however much BJP pushes a national narrative, the fact is that India is not a monolithic nation. The reality can’t be glossed over. Let us not forget, the 2014 juggernaut of Modi did not roll along the eastern coast and the south India. Regional politics is definitely an important component of the Indian national discourse. You can’t gloss it over,” he added.

Indeed, a possibility of an alternative front cannot be ruled out. The political developments over the next year will dictate whether it becomes a reality or not. Right now, regional parties are playing their cards too close to their chests. If the right moment comes, and they manage to set aside their narrow interests and gloss over petty ego tussles – problems that have historically afflicted such coalitions – the 1967 political experiment may be in order again, this time against the BJP. #KhabarLive