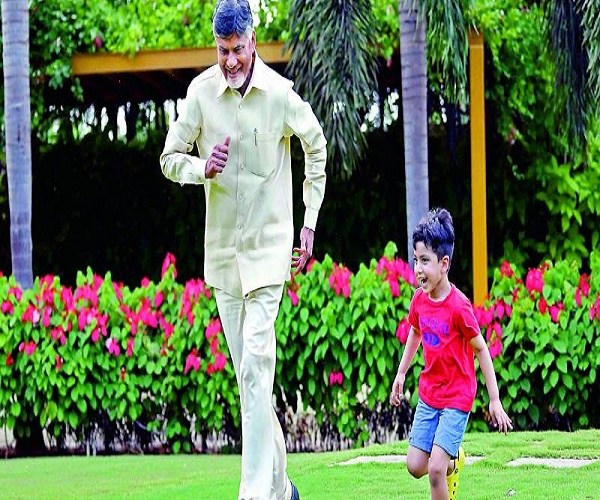 After spending the lavish life of his political career, the sounded leadert of Telugu Desam Party polulrly known as TDP is witnessing the commoner life with low ranking political importance and shadowed life. Sometimes in Hyderabad and sometimes in Vijayawada, Guntur or Kuppam in Andhr Pradesh.

Used to regal treatment, Naidu now undergoes frisking, downgrading of privileges, even the breaking of structures he built. His party alleges it’s vendetta. Yet, it’s all within the rules. From being frisked at the airport (as per protocol norms) to the demolition of the reportedly illegal building he used for meeting people, to demolition notices being served regarding the “official residence” where he is living, Chandrababu Naidu is getting paid back royally in what many see as the same coin.

For the man who was married to the daughter of a legendary actor (NT Rama Rao), who donned the mantle of the most powerful backroom boy of the Telugu Desam Party (TDP) and a self-styled most powerful authority during the regime of his father-in-law as the Chief Minister, to being the man who meticulously planned his ascent by striking at the colossal NT Rama Rao himself, everything has been quite plush so far for Chandrababu Naidu.

Nara Chandrababu Naidu could not even be touched for close to nine years during his uninterrupted rule of undivided Andhra Pradesh as its Chief Minister. He rubbed shoulders with the who’s who of the business and political world — including Microsoft’s Bill Gates, Bill Clinton (who was then President of the United States) and Tony Blair (who was then Prime Minister of the UK). He led the Opposition in the same state, installed at least three Prime Ministers — H D Deve Gowda, IK Gujral and Atal Bihari Vajpayee — enjoyed the patronage of Prime Minister Narendra Modi for at least three years since the 2014 elections.

The same Chandrababu Naidu is now finding the going tough.

Through his long and chequered rollercoaster political peregrination, spanning over four decades, Naidu has seen the zenith of power — and also a sharp downturn. He lost power to YS Rajasekhara Reddy twice in two successive terms but bounced back as he knew how to cash in on the situation and whom to ally with.

The AP state government has constituted a cabinet sub-committee with Finance Minister Buggana Rajendranath Reddy as its head with 15 terms of reference, including payments, decisions, borrowings, agreements, and other actions of the TDP regime, having to submit a report within six months. Another nine-member committee, also under the aegis of Mr Rajendranath Reddy, would look into all power purchase agreements and deals.

For the first time in his life, after losing the elections with an embarrassing mandate in May 2019, Naidu is now experiencing how it feels to be both out of power — and like a commoner. He was meted a humiliating defeat by the YSR Congress, whose leader YS Jaganmohan Reddy is now the Chief Minister. And thereafter, Naidu is being made to get a taste of the life of an ‘aam aadmi’ at a time when his career has hit its nadir. It is now all gloomy with no glimmer of hope as the 69-year-old Naidu will be 74 years by the time Andhra goes to polls next, leaving him beyond his prime.

Getting frisked
On June 15, Chandrababu Naidu had to join a queue of other flyers to subject himself to frisking at the Vijayawada airport. He had to get into a bus along with other passengers to reach the airport — instead of the usual separate VVIP gate. This led to a hue and cry from the Telugu Desam leaders.

However, the Directorate-General of Civil Aviation and police officers of various ranks who oversaw VIP security clarified that it was perfectly normal and completely in line with the protocol offered to the Leader of the Opposition in a state Assembly. Even if Naidu was to be treated as a former Chief Minister, what was done was well within the prescribed protocol. He is protected by the National Security Guards. If he had a Special Protection Group (SPG) cover, the protocol would have been different.

But the pictures of his frisking by the CISF personnel went viral — and became fodder for the media for over three days.

To many watching, this seems to be the YSRCP government’s retaliation to various slights meted out to Jagan when Naidu was Chief Minister.

The attack on Jagan at Vizag airport was derided as a ‘kodi kathi’ attack — ‘kodi kathi’ is a small knife used in cockfights. Naidu, TDP leaders and the TDP-backed media trivialised the attempt on Jagan’s life, alleging the episode was being blown out of proportion by Jagan’s followers. Further, there were entirely unsubstantiated accusations of Jagan apparently constructing 70 rooms in his Lotus Pond Residence in Hyderabad, Jagan allegedly amassing Rs 1 lakh crore of wealth and implicating Jagan in a slew of CBI cases.

However, the retaliation seems to be well within prescribed protocols and the law. It appears that the Jagan-led government is tightening the noose around Naidu and his followers in an inescapable, yet procedural manner.

ALSO READ:  No Aadhaar? No Shelter, Homeless In Hyderabad Go Awry And Helpless

From declaring on the floor of the Assembly that anybody who wants to migrate into his party would have to first resign from the post they got from the party in which they currently were to alleging that Naidu was using “unauthorised” structures for government purpose, Jagan is out to hit his bête noire on the grounds of moral turpitude. It is significant to mention here that Naidu had enticed 23 MLAs and 3 MPs into his party from YSR Congress in his earlier stint.

Praja Vedika demolition
On Praja Vedika — public grievance cell structure — where Chief Minister Y S Jaganmohan Reddy held the two-day conference of Collectors and Superintendents of Police, it was announced that it was an illegal structure as identified by the Andhra Pradesh Capital Region Development Authority (APCRDA) and it would be pulled down as soon as the conference was over. Praja Vedika was built by the Naidu government, adjacent to the rented accommodation occupied by Naidu himself as his official residence.

Jagan was out to prove that “charity should begin at home”.

Barely hours after the conference, everything that was portable in Praja Vedika that could be fit elsewhere was removed — the bare shell of the building was pulled down overnight with a bulldozer and 30 workers.

Some Telugu Desam sympathisers moved a house motion on the midnight of June 26, 2019, in the AP High Court. The High Court division bench refused to stay the demolition, holding that the structure was illegal and there was no justification in the appeal, nor was there any public interest involved in it. The petitioner Srinivasa Rao had himself apparently mentioned that the structure — built at a cost of Rs 8.90 crore — was illegal. However, pulling it down would let public money go to waste, he contended in the petition.

But the bench asserted that it could look into the recovery of the cost of the building from those who had it constructed (Chandrababu Naidu and former municipal minister P Narayana ) in reported flagrant violation of River Conservation Act and Environment Protection Act. The court adjourned the hearing by two weeks.

This forced TDP leaders to accept the truth grudgingly, for they could no longer throw stones sitting in proverbial glasshouses.

The APCRDA authorities pasted the demolition notice on the main entrance of the residence.

Though the TDP leaders contended that the structure got permission long ago when YS Rajasekhara Reddy was the Chief Minister of undivided Andhra Pradesh, the APCRDA observed that the house was built within 100 metres from the river course and in contravention of the River Conservation Act. At least 10 structures — including a swimming pool and a helipad — were built as a part of customisation of the building to suit the needs of the Chief Minister’s residence.

It does not end there.

The Andhra Government has also prepared notices for the other structures too which were built in contravention of the rules. The Greater Visakhapatnam Municipal Corporation (GVMC) served a demolition notice to the TDP office in the city and all TDP offices and buildings across the state have come under scanner now.

However, interestingly, it is all well within the rules.

Security downgrade
The state government has withdrawn the Chief Security Officer, Additional CSO and 15-member armed reserve constables assigned to Naidu. However, he will continue to have the Z+ security cover and continue to be protected by the NSG. Retaliating, Naidu has approached the AP High Court, appealing to restore the security he had as Leader of the Opposition in undivided AP.

His son and former minister Nara Lokesh had 5+5 security guards. It has now been downgraded to 2+2 in two shifts.

The government has completely withdrawn the security cover of Naidu’s wife N Bhuvaneswari and daughter-in-law Brahmani.

After the formation of the new government in Andhra Pradesh, former Chief Minister N Chandrababu Naidu has surrendered the diplomatic passport issued to him by virtue of his office and exchanged it with a regular passport.

These are the frills that automatically get attached upon ascending to an office of authority — and they are to be returned when the person is no longer holding the office.

While Naidu’s supporters are taking these issues up as the politics of vendetta and are going hammer and tongs against them in social media, Jagan’s moves seem very well within the rules.

Clearly, it is not a good time to be in the shoes of Nara Chandrababu Naidu. #KhabarLive