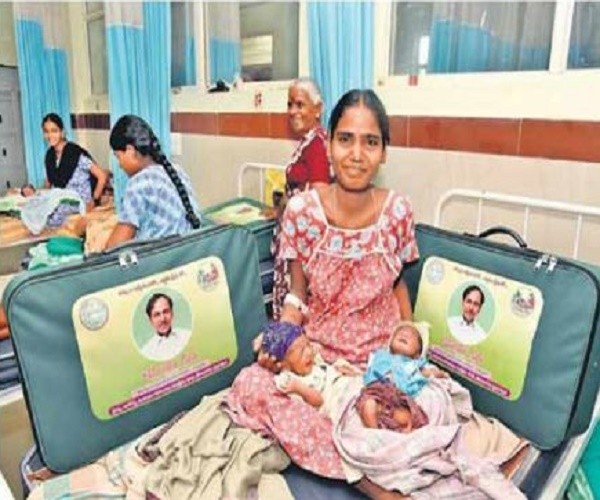 A silent health revolution is on in Telangana. Government health systems are being strengthened. Backward, downtrodden and minority sections are being accorded priority. There is special focus on mother and childcare. This renewed focus is reflected in the number of patients visiting government hospitals – up by over 30% – and also in a steady decline of out-of-pocket expenditure by patients on private healthcare.

One of the schemes that’s putting government hospitals back on track is the KCR Kits. Since the scheme was introduced, some 4.67 lakh women chose to have their delivery in government hospitals in Telangana. Of this, 2.3 lakh were normal deliveries and rest cesarean. If we put a minimum expenditure of Rs 40,000 for normal delivery, including consultations, checkups, investigations, scanning, transportation, medicines, etc, the families of these women have saved around Rs 920 crore.

Similarly, assuming Rs 60,000 for a Cesarean operation, the savings come to around Rs 14,160 crore. This money would have otherwise gone on private healthcare and, in turn, forced these poor families into a debt trap, as is the case with any poor family, which has to incur a substantial amount on healthcare, especially on private healthcare since the government ones earlier didn’t match up to quality. In addition, the total cash benefit to these women came to around Rs 606 crore and another Rs 68 crore in the form of KCR Kits. Those who underwent C-section not only saved on operation but also received Rs 12,000 as cash benefit and Rs 2,000 as KCR Kits. Same was the case with normal delivery.

KCR Kits
One of the objectives of the scheme is to ensure quality antenatal care, which is a prerequisite for a healthy delivery. Deliveries are conducted at government institutions by highly qualified obstetricians, paediatricians and trained healthcare professionals. They provide specific care and attention to newborn babies with special needs to improve their survival chances and reduce the risk of infant mortality. Government institutional medical facilities also aim for reducing the risk of maternal mortality by monitoring delivery and addressing any complications in mothers.

Before the KCR Kits scheme was introduced, only 30% of pregnant women preferred government institutional for their delivery while 70% chose private healthcare. However, among this 70%, a majority of the pregnant women could not afford the expenditure – between Rs 40,000 and Rs 80,000 — on private hospitals, and many a time had deliveries at home. Medical assistance was sought only in case of emergencies. This was a major reason for the very high maternal mortality rate (MMR) in erstwhile Adilabad, Khammam and Mahbubnagar districts. These districts recorded MMR of 152, 99 and 98 respectively in 2015.

In private healthcare, 60-75% of pregnant women opted or were ‘made to opt’ for C-section. Resultantly, the C-section rate of Telangana was the highest in India. Karimnagar district recorded the highest C-section at 80% while in Warangal district, it stood at 69%. Unfortunately, there was hardly any choice owing to lack of a satisfactory alternative.

Quality Care
The introduction of KCR Kits and its effective implementation have reduced maternal morbidity and mortality significantly, improved child survival and ensured quality in maternal healthcare in Telangana (see infographics). For an average of 3 lakh deliveries in a year, lives of 5,137 more infants and 60 more pregnant women were saved.

The scheme has also provided long-term financial and social benefits to women in the State, and made a significant contribution towards empowering them. The KCR Kits scheme is a major success in the health sector and had won the Skoch Award in 2017 and Business World’s award in 2018.

The TRS government has taken steps to modernise labour rooms at primary healthcare centres and teaching hospitals at a cost of Rs 48 crore. It has created and filled new posts of 149 gynaecologists, 172 paediatricians, 176 anaesthetists, 79 radiologists. In addititon, district collectors have recruited specialists, nurses and other staff on a contract basis.

Out of ICU
One of the main deficiencies in government hospitals is lack of sufficient number of ICU beds. In Telangana, one had to travel to Hyderabad, Warangal Nizamabad and Adilabad in case of emergency, shelling out Rs 3-5 lakh on an average on ICU care.

This lacuna too has been removed now with the government creating 22 ICU units of 10 beds each at district hospitals, and around 500 new medical posts, including 100 doctors and 120 nurses, exclusively for ICUs. This effectively means a huge boost for quality critical care. Critically ill patients can now travel to the nearest hospital within a maximum of one hour and can have early ICU care.

What are the financial benefits that accrue to a patient with these facilities? The 220 ICU beds at district hospitals, in addition to 65 ICU beds at Gandhi Hospital, with an average occupation of 50% and stay of 10 ICU days at a minimum cost of Rs 30,000 per ICU day, monthly Rs 5-6 crore and annually Rs 60-70 crore of public money is saved.

Enough care is being taken of diabetes and hypertension patients too — the two lifestyle diseases that are on the rise in Telangana. Every year 12,000-14,000 cases of kidney failure in Telangana are reported, of which 1,500-2,000 people die. The government has established 40 dialysis centres in district hospitals, with 10 dialysis units at each centre, where 40 dialysis procedures are being done every day. With these centres, approximately Rs 3.6 lakh per patient/per annum could be saved (assuming a paitient spends around Rs 1,000 on travel and Rs 1,500 on dialysis every three days in a month).