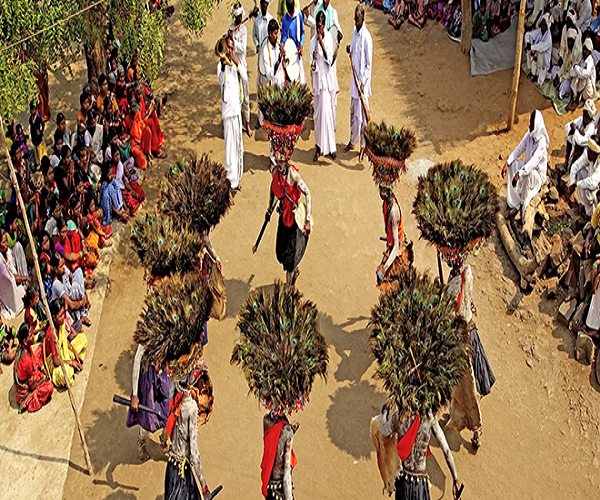 The Koya people of the Godavaris (East and West), Khammam and Warangal districts are yearning to be seen and heard but their pleas for recognition are going largely unheard even in a state that is as culturally rich as Telangana.

The tribe has been preserving one of the rarest art forms known called the “Kommu Koya” with little help from any quarter. “This dance form derives its name from the Telugu words ‘kommu’ and ‘koya’ which mean ‘horn’ and ‘tribe’, respectively. It is over 1,000 years old and is said to have originated during the festival of Bhoomi Pandaga (Festival of Land) during which the Koya people pray for rainfall and proper harvest of their crops.

Even though we have finished primary or high school education and graduation, we love our ancestral art and would do anything to preserve this but there is no help from the government in spite of promised special care for our community. The younger generation is forced to move to bigger cities for education and employment opportunities,” rues Rajayya, an elder member of the tribe that traces its roots to Tummala village, Chintur Mandal of Bhadrachalam agency.

The Koya are a tribe of hunter-gatherers. At the end of the hunting season when the men return with their prey, the horns of these animals are washed, dried, cleaned and
polished to be made into head dresses that are worn when they perform. “A basket is weaved from tree leaves and peacock feathers and the horns are attached to it,” says Rajayya’s daughter Seetha explaining the work that goes into making of the head gear.

“The drums are made from dried ‘gummadi chettu’ (pumpkin tree) which is bound by strips of cow skin. We close the ends with goat skin on the one side and cow skin on the other. The sticks to beat the drums are made out of teak and covered with cow skin. These instruments are kept inside their houses so they are safe from decay caused by the harsh sun,” she adds.

The dance is performed to the beats of music created by the Koya themselves. “We perform this dance in groups of 10 or even 100 depending on the importance and grandeur of the occasion. From child births to political gatherings and even funerals, we put up this performance on every auspicious occasion. This is not only our source of entertainment but also our bread earner along with agriculture,” explains the patriarch.

The youth of the community however, are not as enthusiastic about taking on Kommu Koya as a profession and Rajayya worries that the art form will completely die out if the government does not provide proper training programmes in this art form and safeguard the income of trained Kommu Koya performers. Seetha complains that she has to work as a daily-wage agricultural labourer because performing Kommu Koya does not earn her enough to sustain herself and her family.

“I completed my graduation and TTC but because of unemployment, I help my parents in farming, and work in chilli and tobacco plantations to earn a meagre sum of Rs 150 rupees per day and travel with my crew to perform Kommu Koya to earn my livelihood,” she elaborates. The income is too seasonal to be a secure source of livelihood. So they have to grow paddy and pulses for their sustenance and profit.

Mamidi Harikrishna, the Director of Telangana Cultural Department calls the Koya tribe ‘the walking heritage of Telangana’ and their dance as one of the rarest art forms. He goes on to list the steps taken by the government: “The Koya are being invited to perform at various central and state events so its popularity increases among the masses. The government is generating income for these performers in this way.

The younger generation of the Koya are being encouraged to perform this art and training programmes are being held for them.”But doesn’t look like that is enough. “Our youngsters want to learn this dance because it is fun to perform. But they are afraid to make this their livelihood because it does not provide monthly income like other jobs. Government must take serious measures to preserve this ancient art form before it’s too late,” Rajayya implores.

The extinction of such a rich piece of the culture of Telangana will be a huge loss to not just Telangana but all of India and humanity as a whole. The Koya people will lose a part of themselves if Kommu Koya goes out of practice. Hopefully the UNESCO and the Telangana Government will combine their efforts to protect such cultural artefacts from becoming extinct. #KhabarLive