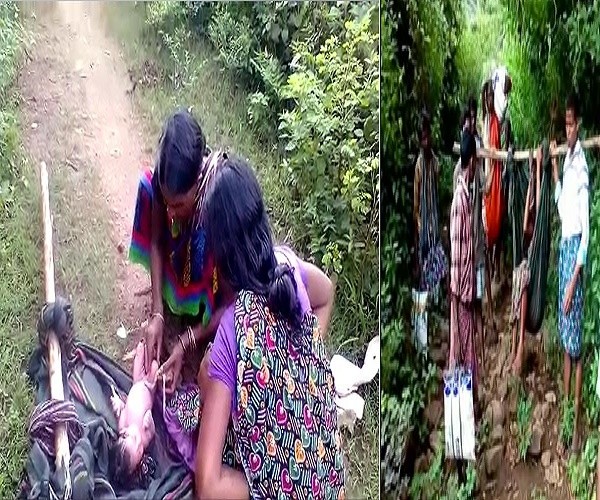 “No one cares for us and even at the time of death, we don’t know where to go and whom to approach,” says the relative of the pregnant woman. A newborn lies on a piece of cloth that is spread out on a dirt path. One woman sits and cuts the umbilical cord with a sharp stone, as the mother sits up. The plight of a tribal pregnant woman in Andhra’s Vizianagaram district, who had to give birth on a dirt path on the way to the hospital, simply because there was no road connectivity.

A picture, which was shot prior to the pregnant woman giving birth, shows two men making their way through a narrow dirty path, past trees, shrubs, carrying a wooden pole. On a makeshift swing that hangs from the wooden pole sits the pregnant woman, her hands clutching the stick for support, as her feet dangle in the air.

The third picture is of a relative highlighting their plight. He says, “You also please see our problem. This is the situation we are in and this is how things are. No one cares for us and even at the time of death, we don’t know where to go and whom to approach. Please see this video and do something to help us. Hope it’ll help you in understanding our problem. We are sharing this video carrying a pregnant woman and hope that you see that. We humbly appeal on behalf of these families.”

He then goes on to say, “Her name is Mutthaiama, look at her, she is delivering on the way only. Our life and death is on the road only. Though we have been telling our elders and higher authorities, things (haven’t changed).”

The three pictures were shot when Choudepaly Muthaiama a 24-year-old pregnant woman developed labour pains. With no road to travel on, her family could not call an ambulance. What her family members did instead was make a stretcher out of bamboo, carrying her as far as two kilometres. Muthaiama, however, gave birth to a baby girl on the way to the hospital.

Muthaiama belongs to Maasika Valasachintala, a hilltop hamlet, where this is no road connectivity, leaving residents like her in a crisis during a medical emergency. The hamlet falls under Salur mandal of Vizianagaram district, which comes under Parvatipuram ITDA (Integrated Tribal Development Area).

Officials say that the feeder ambulance service could not go to the hill top owing to the poor roads. Speaking to #KhabarLive, Dr K Vijaya Lakshmi, Vizianagaram DMHO (District Medical Health Officer) said “As she developed labour pains, her husband and other relatives brought her on the handmade stretcher to a nearby village from where she could have been carried to a hospital in ambulance, but she delivered a baby girl on the way.”

When asked about multiple incidents of this kind being reported, Dr Vijaya Lakhmi said that pregnant women like Muthaiama have been asked to report to the hospital a week before their due date so that they don’t have to make this treacherous journey when they go into labour pains. “As the hilltop area does not have road connectivity, ambulance or feeder ambulance services could not go there. We are asking them to come to hospital a week before so that everything can be dealt smoothly,” she said.

Muthaiama was taken back to the hamlet following the delivery. Local Primary Health Centre (PHC) staff have gone to the village and given the required treatment, said the DHMO. She added, “Both mother and baby are doing well. Local PHC staff were assigned to provide necessary treatment.”

Following the incident, a family member of Muthiama wrote a letter to the government demanding road connectivity. “As we don’t have the proper road connectivity and water facilities, we are facing difficulties. As there is no road we couldn’t reach the pregnant women to the hospital in time. From our hamlet to Maasika Chintavalasa it is a distance of 7km,” stated the letter.

It added, “To ensure this does not happen again, please provide us road facility and drinking water facility.”

This was not the first such incident to have taken place. Earlier in July, a family carried a pregnant woman on hand made stretcher in Sirivara area in Vizianagaram district. However, in that case the newborn died following the delivery.

Lakshmisha, the Paravatipuram ITDA PO said that the local medical staff usually have data on pregnant women and makes prior arrangements ahead of the date of delivery. #KhabarLive