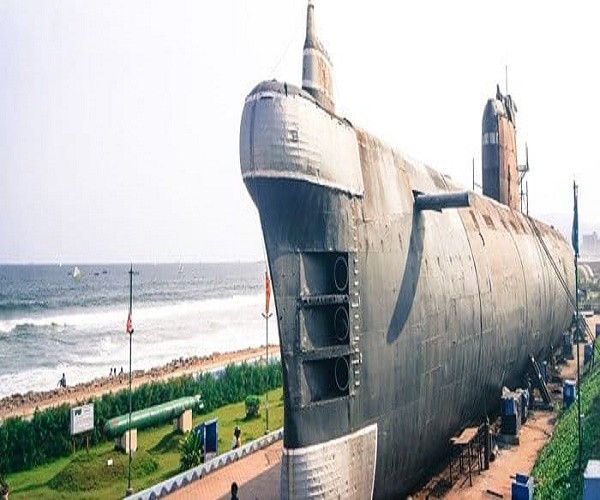 Visakhapatnam! Not a tourist destination per se but much loved by people of the two Telugu States and anyone who has been to this city. For Vizag has a certain charm to it, a distinctive laidback vibe to it that is typical of a coastal town, mingled with a lingering air of the colonial rule it was under. From its anglicised names like Vizag and Waltair – the city’s most well-known area alongside the beach to its old stone buildings like the Waltair Club and the Andhra University that today serve as landmarks.

Despite being Andhra Pradesh’s largest city, Visakhapatnam is still a picturesque little coastal town at heart, where locals still like to spend their evenings at the beach. And, it is the Ramakrishna Beach – or the RK Beach, as it is more popularly known – that is the beating heart of Visakhapatnam. It is a four-kilometre stretch of golden sand beach with a clean, wide promenade that is open only to walkers and cyclists early every morning till seven when regular traffic starts.

It is also along this beach that the decommissioned INS Kursura docks today and stands as a one-of-its-kind museum open to the public. This submarine, a veteran of the Indo-Pak War of 1971, retains its interiors as they were, along with additional installations that offer a peek into the lives of navy personnel who live underwater for half a year at a stretch, protecting our borders. Also, opposite this museum is another museum similar in style. This one housed in a Tupolev anti-submarine aircraft.

The TU142, which holds the distinction of being the world’s fastest turboprop aircraft to ever have been made, served in the Indian Navy too, before being decommissioned and set up as a museum. This one too is unique in the fact that, though there is another TU Museum in Russia – the country of origin of these aircraft, this is the only one where one can go into the aircraft and explore.

With souvenir stores and simulated game zones to go with the museums, RK Beach is an engaging destination. Other prominent attractions on the beach are the Light House, Dolphin’s Nose – a cliff shaped like the nose of a Dolphin, a temple dedicated to the Goddess Kali and the Visakha Museum.

Many beautiful beaches dot the verdant landscape of Visakhapatnam. Of which, Rushikonda Beach is next in terms of accessibility, just a little further past RK Beach. A pleasurable drive along the winding ghat roads that hug the coast gets you this beach. En route here is Kailasagiri, a landscaped garden atop a hill offering stunning panoramic views of the city. Here is where you will find the now iconic, massive sculpture of Shiva and Parvati.

The most striking of Vizag’s beaches and its best-kept secret though is the Yarada Beach. Cloistered away from the world, hidden by the emerald green hills of the Eastern Ghats that abound it on all three sides, Yarada is the perfect lazy afternoon getaway from the city.

Even if one wants to look beyond the beaches, Visakhapatnam doesn’t disappoint you. For there is yet another hill, Ross Hill. This one made interesting not just because it’s the perfect vantage point for harbour views of the Visakhapatnam Port but also because here you will witness sitting alongside each other, three places of worship of the three major religions of our country – a chapel, a temple and a mosque.

ALSO READ:  The Historical Significance Of The 'Toy Village' Of 'Kondapalli' In Andhra Pradesh

And, claiming number one spot on the list of things to do in Vizag is the train ride to Araku Valley. One of the most scenic train journeys in the country, the train leaves from Visakhapatnam at dawn and reaches the Araku by mid-morning. Taking you through 57 tunnels that alternate between jaw-dropping valley views to one side and a thickly wooded hillside to the other.

Once in the valley, one can walk through coffee plantations, interact with the local tribes, visit the waterfalls in the area and dig into the local cuisine. Finishing the trip back to Visakhapatnam with a quick stop at the Borra Caves, one of the deepest cave systems to be found in India. #KhabarLive