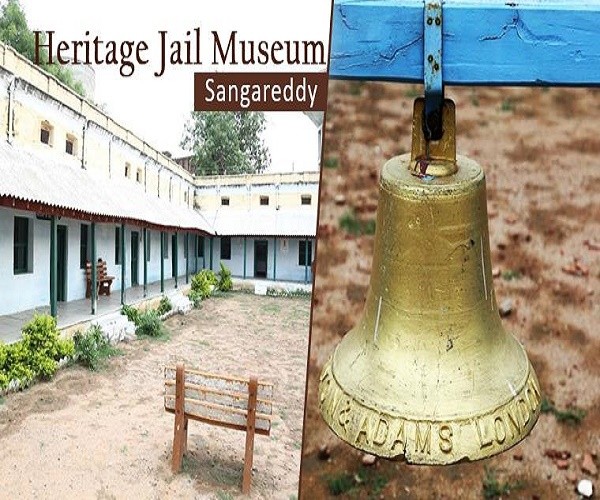 Telangana state has a wide range of wonderful destinations that never ceases to amaze you. Here’s aMuseum that offers a sneak peek into how jails were functioning more than 200 years ago. A completely new experience that awaits you in Sangareddy, the District Headquarters of the newly formed district of Sangareddy in Telangana State.

According to PWD Records,this jail was constructed in the year 1796 A.D, during the Prime Ministership ofSalar Jung I. This is the oldest District Jail in the region. This prison is spread across an area of 3 acres and 10 guntas, out of which the jail building occupies 1 acre and 12 guntas.It is a moment of pride for the region, to preserve the remains of this historical building, almost intact. During the period of 1947-48 when Hyderabad state was still independent before merging with Indian Union, the Darogha acted as the head of the jail.

Currently, this Heritage jail building consists of two wings i.e. male and female wings. There are nine barracks in the male wing and one barrack in the female wing. The ration store, staff lunch room, gas room, kitchen and a room for washing the crockery and cutlery are situated in the female wing.In over two centuries of its history, the Sangareddy jail was under the supervision of heads of various departments such as Revenue, Judiciary and Medical departments. Till 1981, this jail was under the control of Medical department.

In the year 1981, the responsibility of District Jail, Sangareddy was shifted to the Prisons Department and was headed by a jail superintendent in the cadre of Deputy Superintendent of jails.The authorized accommodation was 90 male prisoners and 5 female prisoners. This old DistrictJail is now preserved as a Heritage structure andhas been converted into a Museum under the direction of Sri V.K. Singh. I.P.S, D.G Prisons, the brain behind this project.

It was formally inaugurated recently, to showcase the history of the jail to curious travelers. It houses artefacts belonging to old jails and their evolution from time to time in various phases of history.

ALSO READ:  ‍KCR Turn Down All 'Speculations On KTR' And Successor In Hyderabad

Tourists visiting this 220-year-old jail in Sangareddy, can now explore various interesting aspects related to the history of jails during the Nizam rule. It is indeed a unique place to visit, because until now we have heard of only the Cellular Jail in the Andamans being showcased prominently as a heritage destination. Telangana has indeed opened new vistas through this jail museum, offering rare experience to the visitors. #KhabarLive