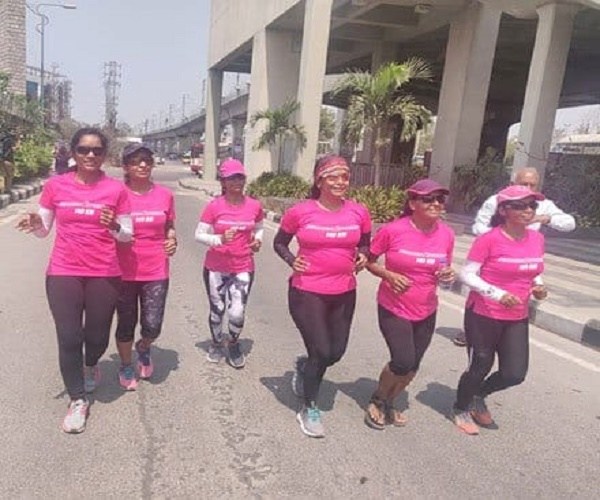 It took countless hours and two months of prep work, involving running under the hot sun at different hours of the day to work up to running the 140 km distance between Warangal and Hyderabad.

Six women, each with varying levels of fitness banded together for the challenge to drive home the point — that there is no age limit to getting fit — and also spread awareness about breast cancer. Their run, which began in Warangal on March 1, concluded on March 3 at the Nagole station.

“The first goal was to spread awareness among women about how important fitness has become in our life today. We have become so busy with work, personal commitments that we are not taking out time for ourselves and our body,” says Devyani Haldar, who is part of the Hyderabad Runners Society and has many marathons under her belt.

While she and two other women — Vaishali Mane and Poonam Mehta — were experienced runners, the other three ladies — Leena Roy, Sarita Narmeta and Rajitha Mynampally — trained hard to increase their stamina for the arduous run ahead of them.

Leena who has been the ambassador of Pinkathon for the past two years had previously participated in 10k runs, but never in an ultramarathon like this. “It was the support of all the ladies and the support group that we all managed to come through with flying colours and without any injury in the three days. The two pacers who kept track of the group in the front and back ensured that everyone moved in tandem, especially on highways,” says 58-year-old Leena.

Regular stops for water and sugarcane juice kept them hydrated and energetic for the run. Devyani, who had already run between Vijaywada and Hyderabad previously, guided the women on what challenges they might face and preventing any injuries that could arise during their run.

“When the run was flagged off from Thousand Pillar Temple by Milind Soman at 5:30 am, the temperature was alright. But, as we hit 11 am, the temperature rose and it was quite a task to keep moving. So, we had to time our runs, take a long lunch break and, then, start up again until dark,” explains Devyani.

Running on the highway in the wee hours meant poor visibility, so the pacers would carry torches to light the way ahead of them. The group covered 55 kms on Day 1, 48 kms on Day 2 and covered the remaining distance on the last day which concluded at Nagole station in Hyderabad.

Apart from the support group which included a physiotherapist and a Pinkathon team which checked in with the ladies every 10 kms, the group of six encouraged and motivated each other when the energy levels flagged and some started to slow down.

They also encountered a fair bit of curious stares from the villagers who often stopped them to enquire about what they were doing. “It was quite an experience and, at the end of it, we all became one family, united in our efforts,” says Leena. #KhabarLive