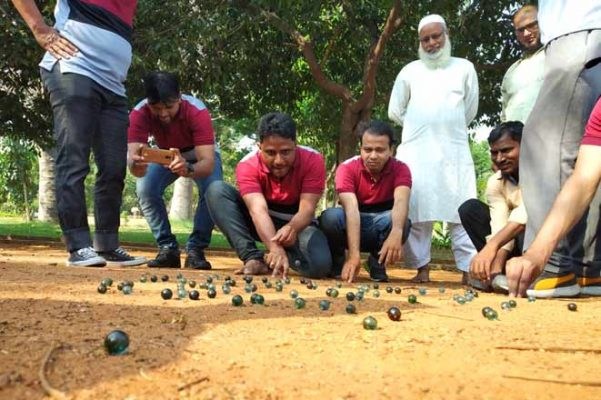 Next week, they all assembled at the Chacha Nehru Park at Masab Tank where the group went back into their childhood days playing around ‘Chhupa chhupi’, ‘Langdi taang’ ‘Pakdam pakdi’ and other games of the days of yore. There were others like ‘Goli’ game with the participants rolling out marbles and indulging in competitions.

ALSO READ:  An 'Honest Budget-2019' About What it Takes To Fund A Welfare State!

It caught many eyes. Of course, on a good note, many joined them in the coming weeks at the same venue. “Eventually, we decided to form a group, or rather a club, and named it ‘Back to Bachpan’. Since April, we have organised 30 events across the city and parts of Telangana. People welcome the initiative and continue to participate. It was a rare opportunity for them to get back to their childhood,” said Syed Younus, who works as HR Manager with an MNC.

Younus teamed with his two friends Abdul Khaliq, who is associated with an NGO, and Hameed Baig, who is a businessman, and started the club. “We chose the Chacha Nehru Park as it was a public place and many people, including senior citizens, visit the place. After the word spread through social media and print media about our concept, several people started visiting the place and participating enthusiastically,” explained Younus.

Back to Bachpan, so far, has visited several areas of the city on invite from various communities. “In fact, people from Sangareddy district had invited us and we went there on a holiday. People really enjoyed playing around with us. Parents came along with their children to get them familiarised with the age-old games,” said Hameed Baig.

The participants pointed out today’s children were hardly exposed to such fun games which involved long hours of outdoor activities. “These games of our childhood involved physical activity, fun, friendships and a lot more which the kids of today are sorely missing,” said a participant.

Mohd Younus, another participant from Red Hills, who usually participates in most of the Back to Bachpan events, said that as a child we played these games in lanes in our colonies amidst the taunts of our parents. “After a long time, we enjoyed playing the games again. This time, our parents encouraged us to participate in the event,” he said. He added that in present times, these act as stress busters and all elders should play it again, added Younus. #KhabarLive