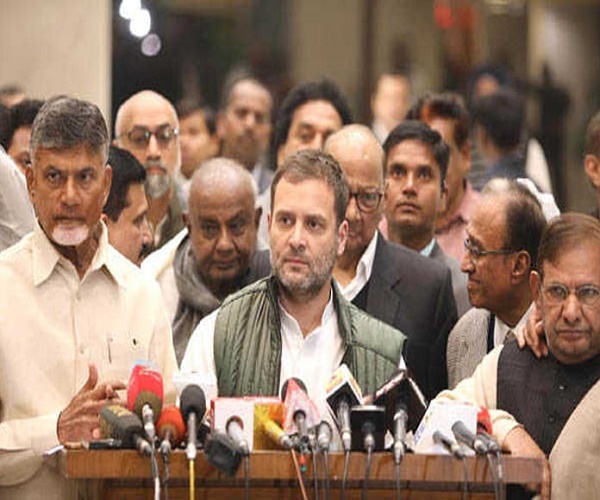 Suddenly the map of India looks different. The BJP which was on a winning spree till early 2018, started losing its popularity and a new window of opportunity started opening for anti-BJP parties raising the big question Ab Ki Baar Kis Ki Sarkar?

The BJP, which had won 282 seats in the 543-member House in 2014 and had a near sweep in the Hindi heartland and States like Maharashtra by having pre-poll alliances with big, mini and micro parties including regional and local outfits, seems to be facing an uphill task as most of its allies have chosen to walk out of the NDA which now resembles a depleted force as compared to 2014.

The NDA, because of its attitude, has closed all its doors for any rapprochement and has paved way for anti-BJP forces to come closer and send a signal that they would unitedly work for defeat of the BJP.

Sensing the trouble ahead, the BJP, in a strategic move, brought in the Constitutional Amendment Bill sanctioning 10 percent quota for economically backward classes. It in fact thought that the Opposition parties will try to stall the Bill and it can gain political advantage by branding them as anti-people and anti-economically backward classes. But this move of the BJP has been defeated as all parties barring a couple of them voted in favour of the amendment. Whether the Bill will stand the scrutiny in Supreme Court or not is a different issue.

Similarly, it decided to apply GST balm for small business by doubling the limit for exemption from payment of Goods and Services Tax to Rs 40 lakh and announced that the higher turnover cap of Rs 1.5 crore for availing composition scheme of paying 1 percent tax effective from April 1.

A couple of BJP leaders acknowledged that the party would have to revisit its strategy. The talk making rounds in the Hindi heartland is that the saffron party has lost significant support from key sections of voters who played an important role in propelling the BJP to power in 2014. People are openly exhibiting impatience and disenchantment and feel that the BJP-led NDA had failed to address their issues.

ALSO READ:  #MyRecepie: The Sweetness Of The 'Winter Carrot' In Hyderabad

They also feel that the party, during its five-year rule, failed to live up to the people’s aspirations. It has lost support among farmers, Dalits, Tribals and the unemployed. This was reflected in the voting pattern in Madhya Pradesh, Rajasthan and Chhattisgarh. Though the BJP has been trying to showcase a basketful of policies, they do not seem to have percolated down nor have they enthused the voters. Even the traders and middle class who had identified themselves with the BJP in 2014 seem to be disappointed by the performance of the government.

If the recent Assembly elections in three States and general impression across the country is any indication, the party is sure to face a challenge to win back the farmers and the unemployed. Political analysts say that In Uttar Pradesh, where the BJP won 71 seats in 2014 (73 with its allies), the party faces a major challenge and could see its margins cut by half as the BSP led by Mayawati and the SP led by Akhilesh Yadav have decided to forge an alliance.

West Bengal, Odisha, Kerala, Andhra Pradesh and Tamil Nadu have a total of 164 Lok Sabha constituencies. Out of which the BJP contested 102 in 2014. Of them, it could win just seven. It barely scraped through in the Gujarat Assembly polls last year, and its poor show in the three States recently coupled with the likely alliance of the Samajwadi Party and the Bahujan Samaj Party in Uttar Pradesh has made the road ahead much more difficult for the party.

ALSO READ:  Why The KCR’s Innovative Voter Reachout Plan Not Comes Under Violation Of 'Model Code Of Conduct' In Telangana?

The BJP has been trying to defend itself saying that the Congress has won just three States. It argues that in Rajasthan people opt for change every five years and in other two States it was natural that there would be some amount of anti-incumbency as the saffron party has been in power for a long time. They feel that this cannot be considered as reckoning of grand old party.

But the ground situation across the country is different. With the resurgence of the Congress in these States and a combined Opposition, it will not be easy for the NDA to win in 2019.

Talking to people from Hindi heartland clearly gives a broad picture. After 55 months of being in power, people say Modi has not proved to be Jan Neta (people’s leader).

In Odisha in the recent by-elections, the BJD got huge majority. The Congress lost badly but then interestingly, the loss of the Congress did not benefit the BJP. Hence the BJD now has decided to maintain equal distance from the BJP and the Congress in the ensuing Lok Sabha elections.

In Tamil Nadu, the politicking that was done by the BJP soon after the death of Jayalalithaa has not helped them to gain any foothold. The DMK seems to be in a more comfortable position this time. In Telangana, the TRS is well placed and in Andhra Pradesh, the BJP has no hope even to save deposits and as the election time is drawing closer, its own leaders have started abandoning the sinking boat.

A good showing in Madhya Pradesh and Rajasthan has given a new hope to the proposed Mahagathbandhan. The BJP has been trying to brush aside the imminent threat from the Mahagathbandan as a nonstarter and has been quoting the results of Telangana Assembly elections. But the undisputable fact is that the Congress has taken the centre stage after its victory in the three States in North. Another important aspect that needs to be noted is that the voters’ perception about Modi has altered.

In Gujarat, Karnataka and the just-concluded polls, the Congress party adopted the policy of soft Hindutva and the same policy is likely to be continued during the Lok Sabha elections. The road ahead is still not easy for Rahul. The Congress is struggling in many crucial States like UP, Bihar, West Bengal and Odisha. To knit a grand alliance, Rahul may have to manage inexorable political contradictions and cede space to regional players. Gandhi would have to balance the interests of his allies and his party.

Hence the option being considered by the Congress and other political parties which are opposed to the BJP appears to be to adopt a new formula. Since a successful Mahagatbandhan against Modi requires the right equilibrium between a resurgent Congress and good showing by regional parties, the thinking among the likely partners is to have seat sharing where it is feasible and in States like UP and AP to go it alone. In West Bengal, the main fight will be between the TMC and the BJP.

The presence of the Congress will be nominal. The idea is to identify which regional party is strong in which State and allow them to have an upper hand so that the mission of defeating the BJP can be achieved. #KhabarLive