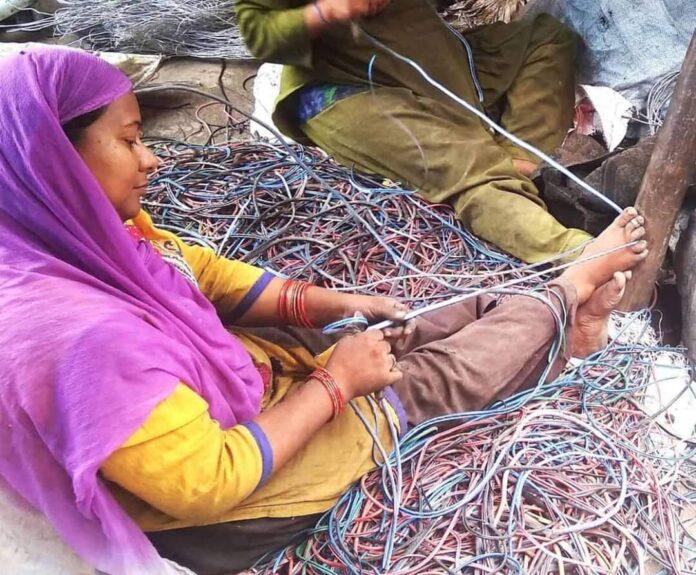 A study by Toxics Link, an environmental research and advocacy non-profit identified 20 e-waste processing units in Hyderabad operating with impunity without safeguards.

These hotspots house over 5,000 illegal e-waste processing units directly and indirectly, employing over 50,000 people. The sheer scale of the violation of environmental norms highlights the failure of the system, especially of the E-waste (Management) Rules 2016 (http://www.indiaenvironmentportal.org.in/files/file/EWM%20Rules%202016.pdf).

The study states that many authorised dismantlers and recyclers are selling waste to the informal sector, in complete contravention of the law. The CPCB website currently does not provide their list of authorized vendors as mandated by the E-waste (Management) Rules 2016. None of the units present in Hyderabad’e-waste hotspots have any kind of official authorization for their operations.

For a long time, e-waste from all over the country, as well as from developed countries in the West, has landed up in Hyderabad’s processing yards mainly situated in the north-eastern and eastern parts, including the bordering areas of Nalgonda and Warangal districts. The study – ‘Informal E-waste recycling in Delhi: Unfolding impact of two years of e-waste (Management) Rules 2016’– identifies the location of the hotspots as Seelampur (Shahdara), Mustafabad (North East Delhi), Behta Hazipur and Loni (Ghaziabad), Turkman Gate, Daryaganj among other places. As per the report, “Seelampur, Mustafabad, Behta Hazipur and Loni in Ghaziabad account for about 57%, 15%, 9% & 10% [respectively] of all e-waste informal processing units. Many have been operating for about three decades.”

The study claims that informal e-waste processors are sourcing their waste from a number of stakeholders, among which dealers were the single largest source (38%). Most of these processing yards located near the Yamuna river were involved in all kinds of e-waste processing operations including refurbishing, dismantling, metal recycling and recovery. These manual, rudimentary and unrefined operations directly expose the workers and the environment to hazardous contaminations.

The report further highlights that the 2016 E-waste Rules clearly restrict import of e-waste from outside India. “Only producers which have EPR authorization from the CPCB are allowed to import old equipment or components, only for specific purposes (depending on permissions by regulatory agencies) to India.”

The study also noted that a “majority of the units across their type and size have reported a decrease in the volume of e-waste inflow in the last two years. In 51% of the cases, the waste inflow volume has decreased by more than 50%. This decreased inflow of raw material has resulted in many units having to close down. The dearth of e-waste inflow in the informal market began towards the end of 2016. Coincidentally, this was the time when India had both its E-waste (Management) Rules, 2016 coming into force as well as a demonetization implemented with withdrawal of higher currencies.” The implementation of GST and demonetization led to reduced e-waste inflow in the informal market which was [and still is] largely unauthorised.

“Large dismantling units with adequate financial resources [have] expressed interest in obtaining authorisation, in order to operate formally and in some cases have applied but their authorisation applications [have been] pending for the last two years,” says the report.

As per the report, “the e-waste informal processing units of the National Capital Region are all operating in shabby and small rooms of residential or unauthorized colonies. They do not provide any occupational health safeguards to the workers who are exposed to chemical or metallic dusts, vapour and acidic effluents.” Environmental protection measures such as effluent or waste processing were absent and waste was dumped in the open, often close to drains, increasing the risk of contaminating soil, surface, sub-surface and ground water.

“The open drains running through these colonies carry wastes and effluents of hazardous chemical contaminants along with plastics and dust metals released during the processing of e-waste. It is important to note that these hotspots are located very close to the river Yamuna, the only major river flowing through the city.”

The 2016 Rules and their strict enforcement was supposed to change things on the ground but the study found that 92% of informal processors are unaware of the E-waste (Management) Rules, and material flow remain unchanged. Most of the operations in these units were found to be manual and rudimentary — dismantling or recovering hazardous substances through hammering, open burning or acid leaching still continues.

“Almost no measure for protection of health and environment is taken in the informal e-waste management units during the waste storage, transportation, disman­tling and recycling,” the report says. Hazardous waste and effluents were discharged or dumped in the open and may contain brominated flame retardants, lead, cadmium, mercury, compounds of hexavalent chromium, PVC, all of which have the potential of releasing dioxins and furans. Exposure to them can cause neurotoxicity, reproductive problems, cancer, alteration in hormone functions, bone and kidney damage.

Currently, the regulatory mechanism around e-waste barely recognizes the role of this sector, ignoring their presence as well as their contribution in managing this huge quantum of waste. The labour force engaged here need to be formalized and legitimized, in the regulatory framework around e-waste. The E-waste Rules should be enforced to ensure that hazards associated with processing of e-waste are properly dealt with.

The study highlights how the informal sector is actually keeping this toxic and hazardous waste out of the landfill. “Their wide network, their reach, their understanding of the material and their ability to keep operational costs at a minimum are big pluses.” Additionally, the study clearly shows that there are extensive repair and refurbishment activities resulting in an extended life of the products and a large second hand market, in particular for IT products and large household equipment. As soon as this is included in some clean channel systems, the costs are likely to go up to some extent. Hence, there is a need to look at different integration models.