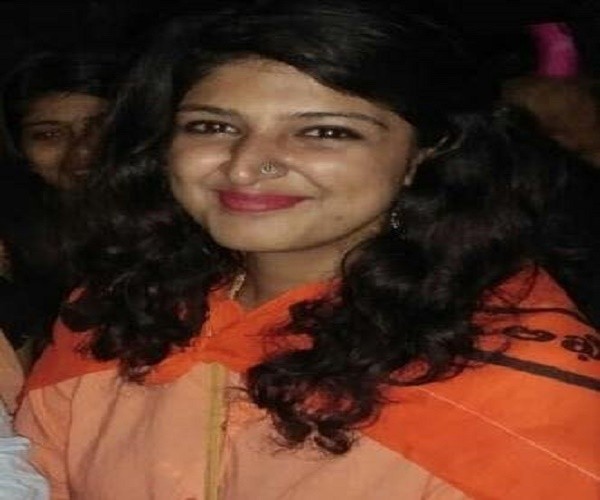 The last time ABVP controlled the university’s students’s union was 2010, when it had swept the panel too. Since then – for the past eight years – the Students’ Federation of India (SFI) or Ambedkar Students’ Association (ASA) have won the presidential post.

A triangular contest became necessary after last year’s alliance between SFI and ASA broke down, reportedly due to the former’s refusal to include Students’ Islamic Organisation (SIO) and Muslim Students Federation (MSF) in their bloc.

The ABVP said their victory showed that the student community was fed up with “other parties”. Uday Inala, the spokesperson, said campus issues such as sanitation and food quality were neglected by the other organisations. “Over the past year, ABVP had taken up these issues, which has helped us gain favour with students,” he said.

The newly-elected president Aarti Nagpal told #KhabarLive her students’ union would focus on accountability, transparency and development. “Students’ issues will be taken up on priority. The transfer of power from the administration to the students is something we will also push for,” she said.

While the university has been seen as the hotbed of anti-caste and anti-ABVP/BJP sentiments in light of the Rohith Vemula movement in the first half of 2016, the ABVP’s victory might not signal a radical shift.

Despite students accusing ABVP and BJP members for playing a crucial role in the events that lead to Vemula’s death, the ABVP continues to have a formidable presence in the university.

In fact, after Vemula’s death in January 2016, the subsequent student union elections in September 2016 saw the ABVP lose the president’s post by a narrow margin of 52 votes. The RSS-backed outfit has claimed that it is the single-largest party in the university and voting figures seem to back such a claim.

“ABVP always gets around 1,350 votes, making it the single largest party. This year too, we have reclaimed that status,” said Inala, the ABVP spokesperson. He said the ABVP’s alliance partners also helped it gain the crucial votes to take it past the finishing line.

In 2014, ASA’s UDA was able to win the president’s post. That year, the SFI and ABVP were pitted against each other and it was the latter that finished second. In 2015, the SFI was able to secure the top post by allying with two smaller outfits. ABVP even then finished second. A similar pattern was seen in 2016, when the SFI-led alliance won and in 2017, when the SFI and ASA joined hands, along with other smaller outfits.

What sets UOH apart from other “progressive” institutions like Jawaharlal Nehru University (JNU) is the presence of strong identity politics. In JNU, the Birsa Ambedkar Phule Students’ Association (BAPSA), the largest outfit espousing identity politics, is restricted to getting around 15% of the vote share.

ASA is a much more significant player in UOH, garnering close to 25% of the votes, which makes it just as influential as either SFI or ABVP. However, it is worth noting that this year, the ASA alliance’s vote share slipped to just around 17%. UOH, unlike JNU, is not a “communist citadel” and there are sharp ideological differences between Left and Dalit groups on campus. Also unlike in JNU, the ABVP’s presence is not marginal in UOH.

From this election result and the past polling trend, a clear pattern seems to emerge. A triangular contest benefits the ABVP, which seems to have a loyal and monolithic constituency of voters, especially in the science departments.

The SFI and ASA, apart from a loyal base on the other hand, have to depend on votes from alliance partners and “swing votes” that could potentially go to either outfit. Hence, complex alliances have always been key to their victory.

Nagpal, the newly elected president, alluded to as much when she said the breakdown between ASA and SFI did play a role in securing ABVP’s win. “Last year, the alliance between SFI and ASA ensured their victory,” she told #KhabarLive.

In JNU, the failure (or even a disinclination) of Left and Dalit outfits to align does not leave the door open for the ABVP to secure such a sweeping victory because a majority of students’ lean towards the Left. In Hyderabad, however, the margins are smaller, with the Right, Left and Dalit groups wielding approximately the same influence among different sections of students.

It’s important in this context to note that the SFI and ASA also share a tenuous relationship, sometimes accusing each other of enabling the “fascist onslaught” of ABVP and at other times joining hands to overcome this very onslaught. SFI’s opposition to the inclusion of SIO, a close ASA ally, has been a significant thorn thwarting a stronger opposition alliance. Believing that SIO and MSF drive “minority communalism” or “minority fundamentalism,” the Left student groups see them in the same light as ABVP.

In a statement released before the elections, SFI cited “ideological differences” as the reason behind the failure to forge an alliance with other organisations.

Speaking to #KhabarLive, ASA leader Dontha Prashant said in the current political circumstances in the country, the brunt of violence and attack of the right-wing are borne by Dalit and Muslim communities. “The ASA believes that members from these communities should have autonomous representation. Our fight is not for power or wealth, but for representation,” he said.

Therefore, in such circumstances, the SFI’s opposition to the inclusion of Muslim students’ organisations in the alliance was a key reason for the ASA to not align with SFI, said Prashant, one of the four Dalit scholars who were suspended from hostels along with Vemula. “In the political context, the onus is on SFI to align with Dalit and Muslim organisations,” he stated. He also described the SFI’s decision to isolate MSF and SIO as part of “soft-Hindutva” politics. #KhabarLive