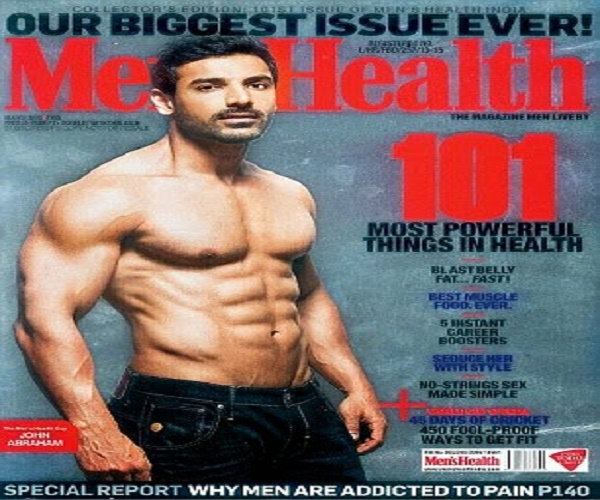 In what is arguably a first in the Indian magazine industry, a Bollywood actor has written out his own story, in his own words, revealing little-known tales from his life.

For the 101st issue of Men’s Health India in March, John Abraham appears on the cover in his chiselled avatar, but also pens a nine-page autobiography-like interview titled “John Abraham by John Abraham” and signed off by the actor.

The story is preceded by the intriguing tagline, “Life is more than biceps, abs and a famous butt!”

In the story, Abraham speaks to his fans and the readers of the magazine like a big brother, telling anecdotal tales from his life and advising them how to live their own.

“It was 20 years ago when I saw Rocky IV. I was a scrawny, gangly and pimply youth. I was so mesmerised by Sylvester Stallone, that I wanted to be him. When the film got over, I ran out and had 12 bananas straight off the cart on the road to get strong and big,” writes John.

In another part of the story, John dispenses heavy-duty advice. “Don’t get influenced by an actor’s body, be inspired by his lifestyle. Let a John Abraham body be your catalyst. But remain the hero of your own story,” he says.

Another story he tells is of a time when he was already a Bollywood star.
“In 2005, after I had broken my ankle in a bike accident, I went onto Google and searched for the ‘Best Trainer In The World’. The name Google threw back at me was American fitness expert Mike Ryan.

I traced Mike to a gym in LA and told him I wanted to train with him. He said he’d charge me $100 an hour, and I agreed. But he didn’t let me into the gym for a week after that. Instead, he set goals for me to accomplish in the car park before I was even given entry,” he says.

Besides fitness, John talks about his friendship with M.S. Dhoni (“I wouldn’t be able to squat like MS Dhoni for half a day behind the stumps. What core strength it takes,” he says), on what a man should invest into his relationships and how his modelling days didn’t make him a style icon, his fitness regime did.

Jamal Shaikh, editorial director of Men’s Health, says: “John Abraham writing out his own interview makes this story so personal in nature, it is a treat for his fans and others alike. In times of PR-generated quotes, this is the closest you’ll get to the personal thoughts of a Bollywood star. We’re proud to have him on our 101st cover, and this story is a special one indeed.” #KhabarLive