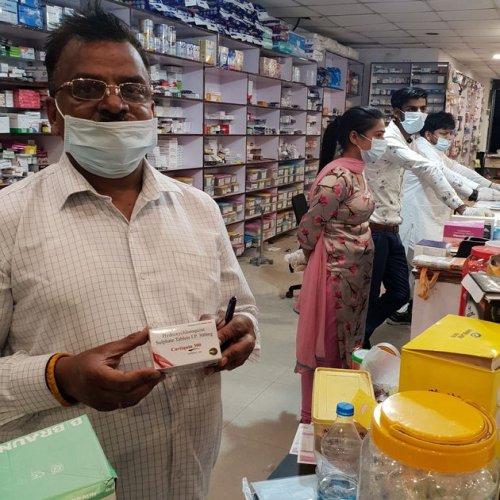 Many doctors in Telangana said that they currently have no choice but to give priority to rheumatoid arthritis and lupus patients who need the medicine the most.

For the past couple of weeks, Srinivasulu, a 50-year-old school teacher in Jagtial district, has been trying desperately to find tablets of hydroxychloroquine (HCQ), the anti-malaria drug that is also prescribed for patients suffering from rheumatoid arthritis.

“The chemists are selling HCQ to only regular customers and not to walk-ins. Also, they provide a single strip every time. Last week, my chemist told me he would get more supply but this time when I visited, it’s out of stock,” Srinivasulu told #KhabarLive over the phone.

Srinivasulu is now down to his last two tablets and is dreading the recurrence of swelling and acute pain in his joints if he skips daily dose. His mother-in-law, who also suffers from the same disease, has already switched to ayurvedic medicine.

As India prepares to begin exporting HCQ again to some countries after a brief ban, pharmacists and patients say it has almost disappeared from the market. Apart from malaria, the drug is also prescribed to patients (mostly women) suffering from auto-immune diseases such as lupus and rheumatoid arthritis.

While state authorities insist there is no domestic shortage, multiple news reports have quoted panicked patients who are unable to access the drug that keeps their pain in control.

Like many other medicines, the ongoing national lockdown has disrupted the supply of HCQ as well. But the bigger reason for the shortage may be the unproven claim—most famously by US President Donald Trump—that the drug could help COVID-19 patients.

Due to shortage of Hydroxichloroquine in the country, the chemists have restricted the sale of this drug to single strip only with the prescription slip.

As some other places insist on prescriptions and patients resort to panic-buying, worried doctors warn that it’s the chronic sufferers who may need the drug more than potential COVID-19 patients.

Doctors across cities told #KhabarLive that they currently see no choice but to give priority to the patients who need the medicine the most.

In Nizamabad and Karimnagar, many hospitals that still have HCQ tablets in their in-house pharmacies are selling them only to patients suffering from severe pain and swelling in joints.

“We are facing acute shortage of HCQ from the last few weeks and are left with no option but to prioritize our patients according to their health condition,” said Dr. Sham Santhanam, a Warangal-based rheumatologist.

Dr. Puja Reddy, a rheumatologist based in Hyderabad —one of the manufacturing hubs of the drug— said that her patients too are unable to find the medicine.

“If the supply chain was disrupted in other parts of the state, HCQ should have been available here as the city is a major production hub for the drug. But my patients too are facing scarcity from the last few weeks,” she said.

*Not just malaria*
According to the American College Of Rheumatology, hydroxychloroquine (Plaquenil), is a “disease-modifying anti-rheumatic drug (DMARD)”, meaning that it helps reduce the pain and swelling that come with arthritis. It may prevent joint damage and reduce the risk of long-term disability.

For lupus patients, there is a more serious threat as there is a possibility of relapse of Systemic Lupus Erythematosus (SLE) if the doses are discontinued. Lupus is an autoimmune disease in which the body’s immune system mistakenly attacks healthy tissues in many parts of the body.

“HCQ is used for prophylactic purposes and prevents the relapse of the disease in Lupus patients. It is an immunosuppressant. Relapsing of this disease can cause serious complications in such patients,” said Dr K.L. Gupta, former Professor and Head of the Nephrology Department, Apollo Hospitals in Hyderabad.

Patients suffering from these diseases are usually put on long-term doses. The daily recommended doses of hydroxychloroquine sulphate for such patents range between 250 mg and 400 mg.

*Where has all the HCQ gone?*
Despite being a crucial drug for malaria, rheumatoid arthritis and lupus patients, the drug is used sparingly in India because the latter two diseases affect less than 1% of the population. According to Arthritis India, an independent research organization Rheumatoid arthritis (RA) affects about 0.92% of the adult population in India.

Presently, Telangana manufactures around 5 crore HCQ tablets of 200 mg each every month and local consumption averages 2.40 crore tablets a year.

Telangana accounts for 70 percent of all HCQ manufacturing and is a leading exporter. The drug has become critical in fighting against COVID-19 with proven efficacy in reducing the viral load.

While the potential benefits of HCQ in the treatment of COVID-19 are yet to be proven through Randomised Controlled Trials (RCTs), Trump’s championing, a controversial French study and in India, the recommendation of the drug by the national task force for asymptomatic COVID-19 cases has led to a surge in demand.

“Hydroxy-chloroquine is found to be effective against coronavirus in laboratory studies and in-vivo studies. Its use in prophylaxis is derived from the available evidence of benefit as treatment and supported by preclinical data,” the health ministry’s advisory said.

Rahul Sharma, president of the wholesale drug market in Hyderabad, and a wholesale dealer of HCQ said that until last month, he used to sell around five boxes of 300 tablets each per month but now the drug is out of stock.

“The major reason for the scarcity is panic buying by people in the last week. The majority of the customers have purchased up to 100 tablets for their self-treatment as well as for their families in case they get COVID-19. What would you expect if instead of 1% of people, 50% of the population purchases HCQ?” Rahul asked.

With the ongoing economic slump and dislocation of the migratory workers during the national lockdown, it’s likely that many pharma companies will face an uphill task to revive the production of HCQs at their units.

Meanwhile, medical professionals like Dr. Gupta are getting numerous calls from his patients asking for substitutes to HCQ, only to have to disappoint them.

“India has the potential to cater to the global needs of Hydroxychloroquine. But the fact of the matter is presently, these patients need HCQ more than COVID-19 patients. To create a balance between the domestic and international demand, the government should take exemplary measures to boost the pharmaceutical sector in India,” said Dr. Gupta. #KhabarLive