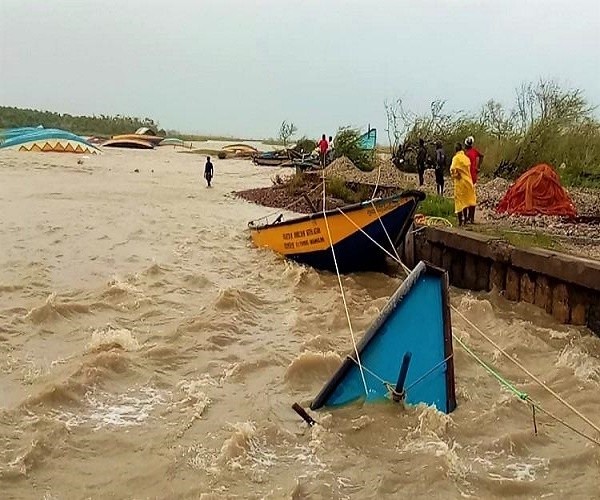 Parimella Vasu, a traditional fisherman from Patmeghavaram village in Andhra Pradesh is a worried man. It has been close to one month since Cyclone Titli struck the state’s Srikakulam district and the locals in his village continue to be in dire straits.

“Most of the fishermen’s boats flew away because of the force of the wind. Each boat costs nearly Rs 9 to 10 lakh. The government has offered a compensation of Rs 10,000 per boat. After our protests and agitations, the government has now increased the compensation to 1 lakh per boat but we are yet to receive any official confirmation regarding the exact compensation,” says Vasu.

Even as normalcy returns in the state, the fishing communities are perhaps the most severely affected by Cyclone Titli with traditional fishermen in the mandals of Vajrapakutturu, Kaviti, Sompeta, Palasa and Santabommal being hit the worst. An estimated 106 villages have been affected in the district and many locals from a few fishing villages have been forced to migrate because of lack of livelihood opportunities.

In Vajrapakutturu mandal that Vasu hails from, other villages that were badly hit include Soonnapalli and Hanumantapuram.

In the wake of the severity of the disaster, the Chief Minister reviewed the losses reported under the fisheries sector during the cyclone, and agreed to revisit the scale of assistance keeping in view the severe damages to the sector.

Loss or complete damage for fiber boats has been set to 50% subsidy of the unit cost of Rs 4 lakh, while subsidy for fish seed farms and aqua culture farms has been set at Rs 3,00,000 per hectare.

The fishing communities however, feel that this compensation is far from sufficient. The nets that the fishermen use cost nearly Rs 3 to 5 lakh rupees and most have them are either lost or have been destroyed because of the cyclone, leaving no proof. The mechanised boats cost nearly Rs 10 lakh, they say. The fishermen claim that the compensation isn’t enough to manage the losses and recover from the disaster.

“How are we expected to continue our livelihoods with this kind of compensation? Most of the fishermen here are already in debt and most of the traditional fishermen are in a condition where they are not even able to earn back the cost of their investment. At a time like this, the cyclone has caused destruction beyond repair. We have no idea how we will ever recover,” says Vasu.

“As fishermen, our demands are not for monetary compensation. Why doesn’t the government take the initiative to replace the equipments that have been lost or destroyed? We do not want anything else!” exclaims a bereaved Vasu.

This bereavement and a plea for replacement arises because most fishermen are not eligible to avail loans and credit from the banks. The fishermen can’t afford to go to private moneylenders either, because the community members don’t see how they can repay them back, given how they hardly scrape by.

While the government has responded immediately to the needs of the people by clearing off roads, enumerating the damage, enlisting the people eligible for monetary benefits, supplying ration for the affected families and providing preliminary medical care, the looming issue of compensation remains.

“Every year, we are facing this problem. The issue is that we were never informed or alerted in any form by the government. The news never reached us and we weren’t prepared for this severity,” says K Sundar, a traditional fisherman from Betalapuram village in the mandal of Mandasa.

Talking about the food and ration supply that they were receiving from the government, the fishermen claimed that a mere 50 kg bag of rice per family was simply not enough at this time. The fishing communities are putting their efforts into carrying out rehabilitation efforts and getting back on their feet, which leaves them no time to earn a living, at least for the next six months. The villagers demand at least six months worth of ration from the government as part of rehabilitation.

“We expressed our concerns to Andhra Minister Nara Lokesh when he was here to talk to the locals. But I don’t think there has been any decision taken about it,” says Sundar.

The locals claim that even medical help is out of reach. Although the government doctors did visit each household for a preliminary check-up, the locals claim that the medical needs for patients who suffer from kidney diseases still remains inaccessible.

In the village of Pathameghavaram, where the villagers already also suffer from Nephropathy, a rare kidney disease, two women died in the past one week because of lack of proper medical access. There are around 15,000 families into traditional fishing in the village. The damage in this village is estimated to be around 250 boats, 33 houses, 70 acres of agricultural land and 200 storage rooms, where fishermen sort and process the fish they catch.

Some of the agricultural land in these villages is converted into land for aquaculture to grow prawns and crabs. These aquaculture lands are completely flooded and have even become the reason for a few attempted suicides in the mandal.

V Balaraju, a traditional fisherman from the Devanaltada village in Vajrapakutturu mandal, says, “The main problem for us is that most of the fishermen here are living in temporary housing in sheds and are moving from one place to another every day. We are still figuring out how to source the material and build concrete structures. The government has promised us that there will be reconstruction but the delay is causing a lot of inconvenience for us.”

Most of the fishermen’s woes are that their names are being left off the list of compensation. Although the second list of fishermen eligible for compensation is also being made by the government authorities, locals claim that false claimants are still making these lists, leaving behind the ones who need the benefits.

One of the Deputy Collectors stationed in the mandal announced that a survey for the second list to enumerate damages among fishing communities will start from November 5, and assured that people who have been left off will be included as well.

Vajrapakotturu mandal, which has been severely affected, had aquaculture cultivation over nearly 100 acres of privately-owned land, which was serving as a source of employment for most of the locals. This aquaculture is partially flooded, leaving many without a means of livelihood. There are about 150 families in the villages practicing traditional form of fishing. On an average, each family earns about Rs 5,000 per month. Unable to bear the brunt of Cylone Titli, nearly 40 families have been driven from the mandal to migrate to other regions or states in search of livelihood, as they have no means of income in a place where everything is flooded, lost or damaged.

There are also a few freshwater lakes in mandals like Santabommali, Vajrapakotturu and Icchapuram, which have been flooded and eroded the livelihoods of the locals in these villages.

For a long-term solution, the locals hope that the government will provide nets and boats on subsidy and invest in educating and encouraging traditional farmers. Most traditional farmers rely on boats and nets of inferior quality and they don’t end up with a catch at the end of the day. This is driving many fishermen to migrate to other regions or take up daily wage labour. At a time when such natural calamities are hitting the region every year, the locals say that the waning practice of traditional fishing is in need of a revival. #KhabarLive