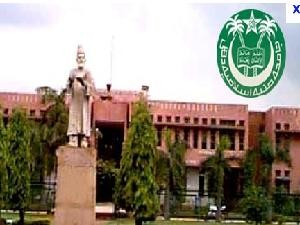 “The problems are being created by people who want to see animosity between us. They are stuck in an ideology of hate, and are working tirelessly towards spreading it.”

Following in the footsteps of students at Aligarh Muslim University (AMU) who bravely fought off malicious attempts to disturb the peace on their campus, students at Jamia Millia University in Delhi are now speaking out against the communal propaganda that is being spread on their premises. The Indian Express has reported that communal slogans such as “Jinnah premi desh chhodo (Lovers of Jinnah, leave this country)” and “Hinduon ko darana band karo (Stop intimidating Hindus)” were raised on May 8 during a march led by Rashtriya Swayamsevak Sangh (RSS) member Rahul Tiwari and others from Okhla’s Sarai Julena area to Jamia’s gate number 7.

Students at Jamia are visibly upset about this rhetoric, and have demanded strict action against the rabble-rousers at this march, many of whom are believed to be outsiders and not students of the university. This reporter was able to access a screenshot of a social media post written by Tiwari, who goes by the name of Rahul Bharatiya on Facebook. It quotes him as saying, “Jin bhi bandhuon ko Jinnah ka samarthan karna hai evam Jamia ke Hindu vidyarthiyon ko dhamkana hai, aaj shaam 6 baje Jullena Evergreen Sweets aaye, unki sutayi ka poora bandobast rakha gaya hai (Brothers who want to support Jinnah and intimidate Hindu students at Jamia, come to Jullena Evergreen Sweets at 6 this evening, full arrangements have been made to beat you up).”

The oft-repeated demand that Muslims ought to leave India and go to Pakistan, because it was created by Muhammad Ali Jinnah as a homeland for South Asia’s Muslims, resurfaced recently in Aligarh when an unnecessary furore was created over an old portrait of Jinnah mounted at the university. The controversy that has been raked up at Jamia seems like a continuation of that, peppered with a false narrative of Hindus being persecuted on a Muslim-majority campus. While Jatin Jain, a BSc student at Jamia and one of Tiwari’s companions, has mentioned in an interview to DNA that Hindu students are being harassed on campus, all the students we spoke with had a different picture to offer.

Aakash Chandran, who is currently in his fifth year at Jamia’s Faculty of Law, pursuing a BA LLB, said, “Before I joined Jamia, some of the people in my social circle had a stereotypical idea of this place. They thought that I may not feel safe but my experience on campus has been totally different. I have not faced any discrimination as a Hindu. This campus has iftaar parties as well as Diwali and Holi celebrations. We also go to each other’s houses without bothering about each other’s religion. The problems are being created by people who want to see animosity between us. They are stuck in an ideology of hate, and are working tirelessly towards spreading it.”

His friend Jaya Sharma, also a final year student pursuing her BA LLB at Jamia’s Faculty of Law, has had similar experiences. She has not felt excluded or disadvantaged because of her religious affiliation. She said, “All this propaganda that Hindus are unsafe at Jamia is bogus. I do not know of a single incident at our university where a Hindu has been treated unfairly on the grounds of religion. I am a Hindu who lives in an entirely Muslim-dominated area but I have never felt that I do not belong here. I have felt loved and respected inside and around Jamia. My flatmates are Muslims. Hindus from outside the university ask me, ‘How do you manage?’ I manage quite well. These are my closest friends now.”

Their testimonies are dramatically different from what Tiwari and Jain have said. Every Hindu student that this reporter spoke to has refuted the claim that Hindu students at Jamia are bullied, and that they do not have the freedom to express their opinions. Divya Sharma, who is pursuing her PhD at the Department of Psychology, said, “It is true that the majority of students at Jamia are Muslim, but I have never felt marginalised because of this. Our professors are only concerned about the work we produce as researchers, and not our religion. They do not make a distinction between Hindu students and Muslim students. I feel completely safe on campus.”

The view that Jamia, on account of being a Muslim-majority campus, is unsafe for women, was also countered by Dhrupadi Ghosh, who is pursuing a PhD at Jamia’s Department of Sociology. She said, “I have experienced safety and care in this community. Even when I have returned late at night, I have never been teased or harassed by anyone. The people who are saying that there is discrimination against Hindus are engaging in a dangerous kind of politics. Their propaganda is all about consolidating power and establishing a majoritarian, Brahminical Hindutva.”

There are Hindu students who have felt so comfortable and integrated in the Jamia environment that they have chosen to spend several years of their academic career at the same university. Tarun Mathur has been studying at Jamia since 2008. He completed an MA in political science here, and followed it up with an MPhil in international studies. He is now pursuing a PhD in international studies. “When Diwali is celebrated at Jamia, there are lights everywhere. The campus is perhaps better illuminated on Diwali than on our Talimi Mela, which is the annual Foundation Day celebration.”

He added, “I feel at home here. We live together, eat together, study together. I have experienced no discrimination. It is only in the imagination of people who like to suppress freedom of thought and engage in vote bank politics. The RSS and its affiliated organisations want to divide students, but their attempt has been a failure. Students have come out to show that we are together, we are united. A handful of people cannot make us hate each other.”

Priyanka Bansal, who is about to complete her MA in convergent journalism from the AJK Mass Communication Research Centre, has been at Jamia for the last two years. She said, “I never had any Muslim friends before I came to Jamia, so I understand that this university is construed in a certain way. There is a perception that Hindus are not treated well. But believe me, I have never experienced anything like that or heard of it happening to my peers. I think this controversy at Jamia started because students were posting updates on social media saying that they stand in solidarity with students at Aligarh Muslim University who were beaten up. This solidarity is important to show because a university is a place to study, think and have open discussions. You can disagree with people but that does not mean you can threaten them or pick up weapons.”

If all these Hindu students feel secure on campus, what is the reason behind the protests being led by Tiwari and his companions? On the condition of anonymity, a student pursuing her MEd at Jamia’s Faculty of Education said, “As you know, elections are coming up in Karnataka, so people are pouncing on any available opportunity to fight in the name of religion. Universities are soft targets. Troublemakers know that right now, the situation is such that they can do anything, and the government will not take any immediate action against them. Thus, there is a huge possibility that they can get away with whatever they do.”

She added, “The nuisance created on our campus is by specific groups of people who are doing the same for a specific purpose and not for a social cause. Religion is a personal thing. There is no need to politicise it. We are students. We are bothered about our studies, our careers, our jobs. Who has the time to think about religion in such a fundamentalist manner? Some groups with a political agenda are the ones putting all these thoughts in the minds of students.”

Alumni of Jamia, who heard of the communal sloganeering, have also come forward to defend their alma mater. Mridul Upadhyay, who completed his BTech at Jamia’s Faculty of Engineering and Technology between 2008 and 2012, is now preparing for a career in the development sector. He said, “My professors at Jamia only cared about my calibre as a student. My being a Hindu did not have anything to do with the opportunities I had or the marks I got. Whether it was in the classroom, the library, the hostel, the laboratory or the canteen, I was treated as an equal. My closest friends during those years were Muslim, and I am still in touch with them. We did not let religion come in the way of our friendship.”

Other alumni took to social media to refute the communal propaganda. One of them was Samarth Pathak, an alumnus who earned an MA in human rights and duties from Jamia’s Department of Political Science between 2008 and 2010, and went on to work as a journalist. On his Facebook wall, Pathak wrote, “I have never, ever faced any harassment/threat in the university from any student, professor or staff on account of my faith. Never. Not even once. On the contrary, I have always found a vibrant atmosphere of love, harmony, peace and a very strong mutual respect regardless of faith, caste, class, and political and social inclinations.”

He added, “The air of Jamia is filled with the beautiful, ever-flowing fragrance of secularism, liberalism, freedom, poetry, knowledge, openness, and free flowing exchange of ideas, thoughts and cultures. Once you step into its gates, Jamia embraces you with unconditional love, and teaches you to be a compassionate, thoughtful, curious, conscientious and empathetic citizen of India…out of my love for my alma mater and what it has given me, I stand firmly with Jamia Millia Islamia and every other University that faces regressive, divisive and extremist threats at their gates!” #KhabarLive