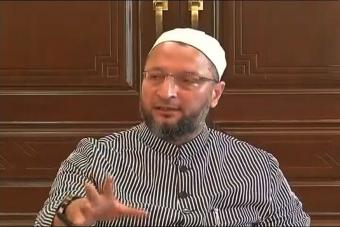 70 years after partition, two and a half generations later, Muslims have to die at the border to meet the standards of majoritarian ideals of patriotism.

For TV news, Asaduddin Owaisi is a gift that keeps on giving. Another matter that almost nothing of what he says ever makes it to the newsprint.

Today, he has said that those who died defending the terror attack on Sunjuwan military station in J&K were Kashmiris and Muslims.

Now, I am no military man. Neither am I unwilling to see the fauj as a force without any fault. But let’s face it, when faujis tell you that there is no religion in an army camp, I believe that fully.

Just a couple of days ago, my colleague Shreya Dhoundial, doughty defender of the forces and herself an Army brat, did a show that said the army’s religion is the uniform. The show ran an inspirational video of a Special Forces officer who related how he was taught by his fauji trainers to forget his religion once he was in the army. Very inspirational.

In that show, Shreya and the team made the same point that Owaisi in his own words made today.

And this time, I agree with Owaisi. Because sometimes, it is important to say what he said, as offensive as it sounds (and also fully suits his politics). That those who were killed defending the country were Kashmiris and Muslims.

It is important because today every Kashmiri is being projected as a stone-pelter and anti-national, even terrorist. By extension, every Muslim is being projected as an anti-national, never mind that most Muslims in the rest of India have little in common with those in Kashmir, except religion. Like a cow-worshipping Hindu from UP and a beef-eating Hindu from Kerala.

It is important because the loyalty of Muslims is being called into question, either directly every day by politicians or insidiously by TV anchors every evening. Love jihad is a real thing.

It is also important because the defining character of patriotism, the impossibly high but utterly fake standards set by the keyboard commandos and chair-borne warriors of right-wing social media, is simply: “soldiers are dying at the border”.

This is literally that. Soldiers have died at the border. It is, by those standards, the ultimate test of patriotism. Which is exactly why, for them, Owaisi’s words are like sitting on a cactus bush, bare-bottomed.

The unsaid tragedy here, of course, is this: today, 70 years after partition, two and a half generations later, Muslims have to die at the border to meet the standards of majoritarian ideals of patriotism. Otherwise, they can simply be killed for carrying a dead cow and the rest of us, after a while, opt to look away. #KhabarLive