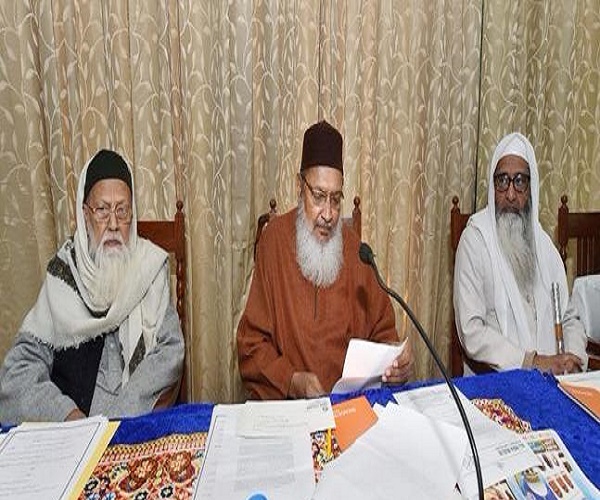 The AIMPLB, an apex body of Indian Muslims, is expelled its executive member, Maulana Syed Salman Hussaini Nadvi, for favouring handing over disputed land in Ayodhya, where Babri Masjid once stood, for the construction of Ram temple.

Taking strong exception to the proposal, the All India Muslim Personal Law Board (AIMPLB) has formed a four-member committee to take disciplinary action against Nadvi, an eminent cleric who mooted the proposal during a meeting with spiritual leader Sri Sri Ravi Shankar.

The deliberations at the three-day crucial plenary, which began here Friday, were dominated by the controversy.

Sources in AIMPLB said Salman Nadvi, who teaches at Darul Uloom Nadwatul Ulama, a leading seminary in Lucknow, may be expelled from the board for not only taking a stand in contravention of its traditional stand on Babri Masjid but also making allegations against the board’s leadership.

With the executive meeting pulling up Nadvi for his proposal, he stayed away from the plenary meeting on the second day and reportedly left Hyderabad. Earlier, talking to reporters, he alleged that two executive members Kamal Farooqi and S.Q.R. Ilyas humiliated him.

Salman Nadvi defended his formula saying this would ensure peace and communal harmony. He alleged that there is a dictatorship in the board and few people are controlling it.

Talking to KhabarLive, Ilyas denied the allegations made by Salman Nadvi against him. “I initiated the discussion but all those who spoke opposed the proposal as it is the well-known stand of the board that the land of mosque can’t be sold, gifted or alienated. This is an attempt to malign the board,” he said.

Ilyas, who is convenor of the Babri Masjid committee of the board, said Nadvi should have raised any issue in the AIMPLB meeting before speaking publicly. He said Nadvi’s action had damaged the board’s reputation at a time when it is holding a crucial meeting here to discuss various important issues.

“If anybody has any issue, he may discuss it in the board. You can’t go and talk on behalf of the board. Mr Salman Nadvi is not an ordinary person. He is the executive member of the board. If he doesn’t agree with the board, let him resign and then do whatever he wants,” said Ilyas.

He also said that if the board failed to take action against Salman Nadvi, it would damage the image of the board.

Some members and special invitees, who did not want to be named, see a conspiracy behind Salman Nadvi’s proposal to create a divide in the board, which is a united platform of all Islamic schools of thought. They said he proposed the formula on the eve of the plenary to create confusion.

The board leaders held no media briefing of the deliberations on Saturday. However, a decision on Salman Nadvi is expected to be announced on Sunday, when the plenary will conclude with the passing of Hyderabad Declaration and a massive public meeting.

After the executive committee meeting on Friday night, the Board issued a statement to rule out compromise on the land in Ayodhya in Uttar Pradesh, on which the Babri Masjid stood before it was demolished by a mob December 6, 1992.

The AIMPLB said that when a mosque is constructed, it remains a mosque always and it can’t be sold, exchanged, or alienated in any manner. It also said it will abide by the Supreme Court order, which is presently hearing the case. #KhabarLive