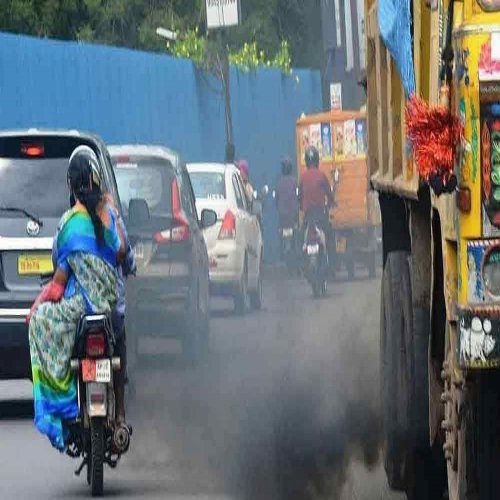 Positive impact of lockdown is proving to be short-term, what with pollution due to human and industrial activities on the climb once again. Despite the all-depressing news of Coronavirus from around the world, there came heartening reports of how the nature breathed easy when the humans were indoors.

Wonderful images and videos of fantastic betterment in state of enviroment-land and water-air went viral. And that was during the lockdown. Alas, as human activity resumes in fits and starts, once again pollution is beginning to sweep across the globe.

Coming to the city, air quality levels in the city, which had improved in the last two months due to lockdown, is steadily increasing with traffic returning on the roads after government easing the restrictions. “Pollution levels are increasing for a number of reasons, the average Air Quality Index (AQI) of Hyderabad is 112, it goes to a maximum of 165 and fluctuates as the pollution varies hourly and daily.

In summer, radiation from the sun is stronger due to which nitrogen oxide reacts with hydrocarbons and other chemicals and also the tropical winds and dust storms pollute the air quality,” said Dr D Prasad, Environmental Scientist (Air) TSPCB.

“The relaxation of lockdown allowed vehicles back on roads, fossil-fuel based power plants, industrial plants and factories have begun their operations, which are releasing thick plumes of black smoke harming and polluting the air quality. Moreover, construction activities and natural contamination are also contributing their bit to the deterioration of air quality in Hyderabad,” he added.

According to the Telangana State Pollution Control Board (TSPCB), the Ambient Air Quality (AAQ) in several parts of the city including Hyderabad Central University (HCU), Bollaram Industrial Area, Sanathnagar, Zoo Park and IDA Pashamylaram was getting back to poor quality of air. After recording a sharp fall in the AQI at 60 in Bollaram in April during lockdown, on Sunday the AQI levels recorded 115.

On May 24, the air quality monitoring unit at ICRISAT recorded an AQI of 127, which is considered ‘unhealthy for sensitive groups’ as per the universal standards.

Similarly, the levels of Nitrogen dioxide (NO2), Nitrogen Oxide (NOx) and Sulphur Dioxide (SO2) are also slowly picking up at Sanathnagar area and the AQI stood at 82 on Sunday. In April, during lockdown the AQI levels had fallen to 62 in the same area. The records show that, in the first three months this year, levels of nitrogen dioxide were far lower than the previous year in the same period. Mostly, nitrogen dioxide is caused by vehicles and industrial gas emissions.

Other than greenhouse gases, the nitrogen dioxide alone contributes to the deaths of three million people a year across the world. In the lockdown, a 55% downfall in nitrogen levels was observed in the city from March 25 to April 25 and it is again increasing gradually from May 7, a 20% increase has been observed till May 24. #KhabarLive #hydnews