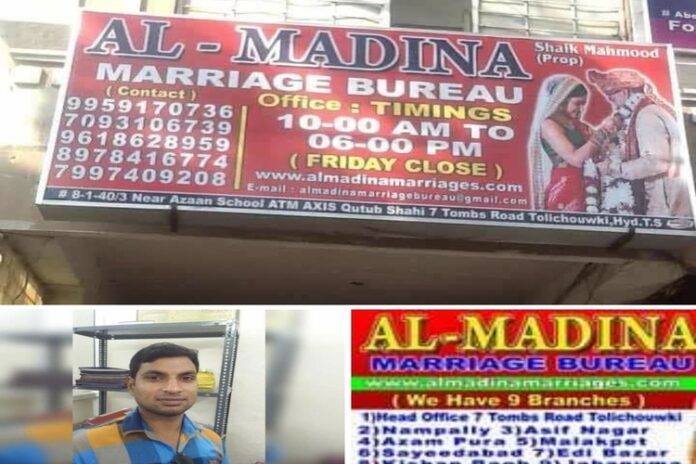 Another Ponzi Scheme fraud exposed in Hyderabad. According to sources, a single person master minded and hatched a plan to become a fly-by-night operator to earn fast buck through cheating gullible lower middle class people in the name of marriage of their children. Lured with attractive marketing and offers, about 10 crores collected and fled away.

A handsome model wearing a Pathan kurta is seated on a couch and he blushes as music from a 70s romance flick plays in the background. “They say marriages are made in heaven, but to get a good partner, you should consider Al Madina marriage bureau,” says the actor in the two-minute long advertisement. This ad is one of the many that tricked several families into investing in a Ponzi scheme. Families that had saved up money for weddings have approached the Hyderabad police with complaints.

Though four persons were arrested in connection to the case, the mastermind behind the Ponzi scheme has been absconding since June.

In the short video advertisements, the founder and proprietor of Al Madina marriage bureau, Sheikh Mahmood, is introduced wearing an oversized blazer and holding a phone.

“The marriage bureau has 20 offices across the city and districts in Telangana,” says a voice-over in an advertisement that encourages the public to invest their money with the Al Madina marriage bureau, which, in turn, promises to invest it in the business. The firm offered Rs 5,000 as interest for every Rs 1 lakh invested with them. So far, close to 50 victims of the fraud have approached the police taking help from anti-corruption activists.

Abdul worked close to the Al Madina marriage bureau’s head office at Tolichowki and had saved Rs 7.5 lakhs for his sister’s marriage. “They told me that there is one year time for her marriage and asked me to invest the money with them until the time of marriage. They said I will get a good amount, but I was cheated,” he says.

Another victim of the scam lost Rs 30 lakh that he had saved up for the marriage of his three children.

The scam has also affected families as a whole. A woman who did not wish to be identified said she invested Rs 40 lakh, collecting the amount from her three sisters for the marriage of their children. One of the four sisters, a single mother, shelled out all of her meagre Rs 1 lakh in savings into the scam.

In the FIR filed at the central crime station (CCS) by a victim, Mirza Arshad Baig, the police booked all the accused in the Al Madina marriage bureau scam under Section 406 (Punishment for criminal breach of trust), Section 420 (Cheating and dishonestly inducing delivery of property) as well as sections of the Telangana State Protection of Depositors of Financial Establishments (TSPDFE) Act, 1999.

“There have been several Multi-Level Marketing and Ponzi scams that have emerged out of Hyderabad. The accused in these cases often get bail and start their scamming work all over again. Filing multiple FIRs across several stations used to ensure that these people, even if they come out of bail, get picked up by police from another jurisdiction,” says Shahbaz, citing the example of Nowhera Shaik, the Managing Director of the Heera group, accused in several MLM scam cases.

“In the Heera group case, we had ensured that the multiple FIRs kept the scammers in jail while the investigation proceeded without their interference. But that is not possible now with the police not accepting FIRs from each victim,” he adds.

The activist said earlier in August that several victims who had invested and lost money in Tijarah Stick Investments, which claimed to do halaal investments in the stock market. The accused in the scam, Syed Muqtar Ali, an Islamic Religious Teacher and Musalli of a Mosque at Shantinagar used to offer Rs 3,000 as interest for every Rs 1 lakh invested in his scheme. Several of the victims #KhabarLive spoke to said their complaints filed at Banjara Hills police station and Nampally police station were “closed”.

ALSO READ:  Why TDP Is Getting Ruined By Internal Conflicts In Andhra Pradesh?

Speaking to #KhabarLive, Avinash Mohanty, Deputy Commissioner of Police, in charge of CCS says that four arrests have been made in the Al Madina Marriage bureau case so far, but the main accused is still absconding.

“We have attached the assets of the accused to the case, but these cases take a long time in court,” says the officer, who added that if multiple people complain to the same police station, the FIR will be treated as one. “But if a person has filed a complaint in his jurisdictional police station, then there could be two FIRs,” he adds.

The officer says that such scams are rampant across the country and not just limited to Hyderabad. “A fixed deposit offers you a maximum of 6% annual interest. These scammers offer 5% interest per month, so naturally it becomes an attractive investment option. When people see that a person who invested gets a regular interest amount for the first few years, more people join and eventually get scammed.” #KhabarLive #hydnews