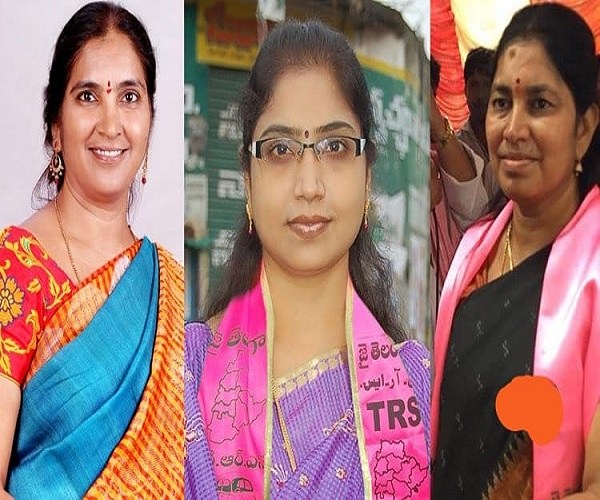 Three TRS MLAs, including Padma Devender Reddy (Medak), Rekha Naik (Khanapur), Gongidi Sunitha (Aler) are in the race for a ministerial berth as Chief Minister K Chandrashekar Rao gears up for expansion of his Cabinet on February 19.

However, the name of Padma Devender Reddy is being considered as the front runner for the coveted post and she is very likely to enter into record books as the first woman Cabinet minister of the Telangana state.

The 29th state in the country came into existence from June 2, 2014, and K Chandrashekar Rao-led TRS government was at the helm of affairs for more than four years before early elections were held. However, the Cabinet was without a woman minister for the entire first term of K Chandrashekar Rao between 2014-2018.

It drew criticism from several quarters but Rao and other leaders clarified on many occasions that a woman representation was missing due to various permutations and combinations and factors like caste, district representation, seniority that are considered in forming a Cabinet.

Rao has made up his mind to make amends this time by inducting a women MLA into his expanded Council of Ministers. After leading TRS to a resounding victory in assembly elections, Chandrashekar Rao took oath as CM for a second consecutive term on December 13. He sprang a surprise by inducting only his trusted lieutenant Mohd Mahmood Ali at that time. After almost two months gap, KCR set February 19 muhurat for expanding his Cabinet.

According to party insiders, a woman minister is a certainty irrespective of KCR inducting six or ten ministers or constituting a full-fledged Cabinet. It may be noted that Rao keeps cards close to his chest and takes unpredictable decisions catching political circles off-guard. Unless there are last-minute changes, Chandrashekar Rao is likely to prefer giving a Cabinet berth this time to a woman legislator, leaders said.

If we look at individual chances, Padma Devender Reddy is a very senior member of the party from the erstwhile Medak district along with T Harish Rao and her rich experience would come in handy for the government. She worked as Deputy Speaker in the first term of K Chandrashekar Rao.

From the ST category, names of Redya Naik (Dornakal MLA) and Rekha Naik (Khanapur) are doing the rounds. If Redya Naik is inducted from ST quota, Rekha Naik’s chances are almost ruled out as she is also from the same category.

The third name being heard is of Gongidi Sunitha, MLA from Aler that was part of erstwhile Nalgonda district. Her chances are slim because G Jagdish Reddy and Gutta Sukhender Reddy’s names are being speculated from the erstwhile Nalgonda district already and inducting her into Cabinet would mean three posts for the same Reddy caste from one district. Hence she is not considered as a frontrunner.

Rumours did rounds a few weeks earlier that Sabitha Indra Reddy, a former minister from Congress and present Congress MLA from Maheshwaram is being lured into TRS with the assurance of a ministerial berth for her and MP ticket from Chevella for her son Karthik Reddy. However, the switch never happened and hence TRS is shortlisting names from among the senior women MLAs within the party. #KhabarLive