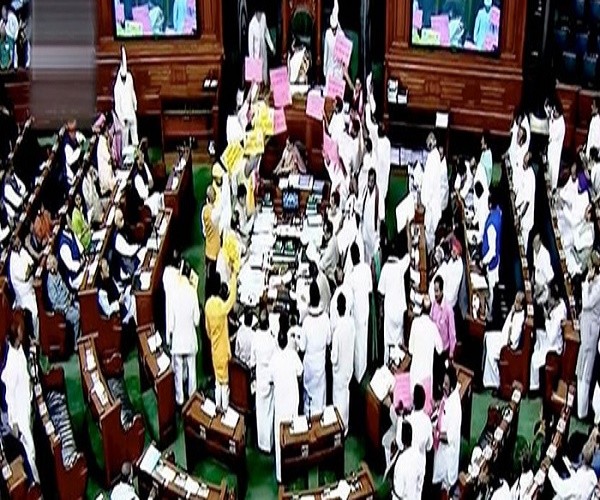 The opposition parties in Parliament have for some time been trying to get the Speaker to admit a motion expressing no-confidence in the ruling party – unsuccessfully so far. The Speaker has been saying that, as some opposition members have been demonstrating and holding placards the House, the House is not in order and no business can be transacted.

It is well known that if the ruling parties so desire, they can get any motion passed, irrespective of the amount of furor going on in the Houses, whether in the state legislatures or in Parliament. If they are not so inclined, however, even the slightest disturbance can be made to seem an impediment.

After all, if the ruling party so desires, and given the majority it enjoys, the demonstrating MPs can easily be sent away from the House and the business taken up. Since that is not happening, one wonders whether the absence of order is not being allowed to become something of an excuse.

It is not as though this is something new, or that governments, whether at the state level or at the centre, have not resorted to tactics of this kind earlier. The question is why. After all, when the government is supremely confident that it can defeat the no-confidence motion, given the numbers on its side, why is it not inclined to agree to the demand? The answer to that, one is inclined to believe, is that such a motion is not merely a game of numbers.

In the context of such motions, many things usually come up for discussion. Importantly, the opposition parties get an opportunity to haul the government over coals about what they believe are its failures. This is a prerogative provided by the provisions of the Constitution and the Rules of Business. While the opposition, no doubt, resorts to criticising the government on many occasions, a no-confidence motion has the special advantage of creating a focus on failures.

And then there is the public attention such debates attract, with the result that every word that is said is heard with rapt attention. Thus, the motion in question may not stop only with discussing why the demand for special status to AP was denied. The discussion is likely to spread many other issues, related or otherwise.

It is common knowledge that the BJP is fully prepared to counter any argument that may be raised by the TDP on the question of the special category status. But that is not the issue at all, it seems. What is worrying the ruling party appears to be that the discussions in the House will emphasise, if not exaggerate, all those actions of commission and omission, which can be attributed to the government over the past few years, and that such a discussion will have an adverse impact on the imminent elections in Karnataka state. At least, this is the feeling that appears to be in the mind of the public at the moment.

Some two decades ago, this columnist once had occasion to point out to a Union Minister that questions were merely replied to in Parliament, but never answered! For example, any government which is in power will never want to lie but, unless forced to do so, may not needlessly volunteer full information about any questions which have not been specifically put.

This is done because the furnishing of unsolicited information, over and above what has been sought, can lead to endless arguments about why something was not done, or something else was done etc. Experience has taught all retired bureaucrats, including yours faithfully, that most of the skill in handling discussions in legislatures lies in avoiding embarrassment.

In this context, old-timers will recall a very interesting incident pertaining to NTR replying to a question in the Andhra Pradesh Legislative Council in 1983. As advised by the department concerned, he had provided a concise and short reply to the question. Not satisfied with the reply, many senior members were on their feet demanding several clarifications. The information being sought for was, of course, available in the papers which were in NTR’s possession, and also in the Note for Supplementary normally provided to all ministers to be used precisely for such contingencies).

But several reasons, including his recent entry into politics, a naive belief that the truth should never be withheld from public fora, and the natural irritation at being cornered in such an embarrassing manner, contributed to NTR taking the extremely unusual step of actually reading out, verbatim, the Note for Supplementaries!

This columnist also recalls a discussion in the National Disaster Management Authority, some ten years ago. Some information required by the Ministry of Home Affairs was being furnished to assist the then Home Minister to reply to a question in Parliament. In that context, the perfectly correct advice, namely, to restrict the reply to precisely the information sought for, and no more, was understood by the other Members (all of them distinguished persons from different walks of life), as an effort to ‘hoodwink’ the House!

As a matter of fact, such dilemmas need not arise only in the context of discussions in legislatures. For instance, there was the time, in the late 1980s, when this columnist was a Secretary in the Government of Andhra Pradesh in an important department. A minister was trying to bulldoze the department into agreeing to a course of action that was perceived by the officials as not in the public interest. Having exhausted the remedy of asking for a review of his decision by the minister, this columnist, as a last resort appealed to the Chief Minister to intervene. Following the Chief Minister’s written instructions, government orders were issued, partly in accordance with the minister’s wishes.

This was done because there was nothing technically illegal about those orders except that the department had justifiable reservations against it. Thereupon, the matter was questioned in a court of law and the department was asked to file its counter to the points raised in the writ petition. The Secretary was in a fix.

He could neither reveal the original stand taken by him nor defend the government’s decision effectively, given his own misgivings about the matter. But then, as a disciplined civil servant, he followed the correct procedure and filed an affidavit defending the orders as competently as possible. Naturally enough, the court sensed the weakness in the government’s stand and promptly called for the note file – a document that is normally not produced in a court unless specifically called for.

Once that was done, the truth was out, and the orders were quashed. This illustration is being used merely in order to demonstrate the conflict that often arises is governance, between private motives and public interest, and to show the performance by the civil servant of the proper duty ensures that justice prevails ultimately.

Let us get back to the issue. The point being made is that, somewhere between the two extremes – of shying away from a debate on account of nameless fears, and making a further contribution to the wasting of public time in legislatures by spewing out unwanted information – lies the middle ground of proper parliamentary responses.

Neither a needlessly holier than thou attitude, nor an unwarranted reluctance to agree to reasonable demands for response, should be allowed to come in the way of governments discharging their primary duty of being accountable to legislatures and through those august bodies, to the people of the country. Tactics, strategy and politics apart, constitutional commitments need to be honoured. #KhabarLive