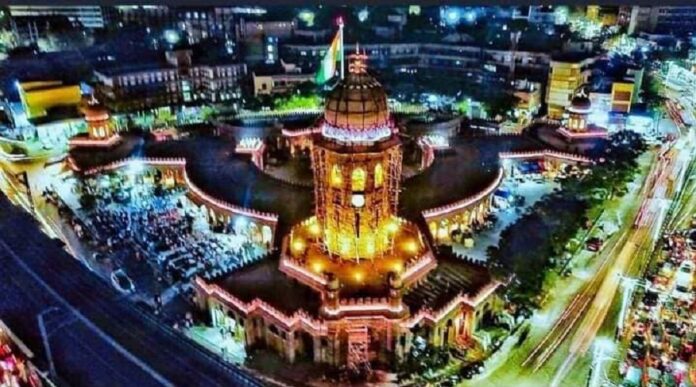 The Nizami look ‘Moazzam Jahi Market’ is not just a fruit market of recent times, as it’s commonly referred to, but is an identity of the city of Nawabs. The triangular market was build between 1933-1935 by the then City Improvement Board to divert the crowd from Mehboob Chowk Bazar, Residency Bazar, and Begum Bazar. The vision behind the Moazzam Jahi Market was to offer ‘universal stores’ like in the West where people can buy everything under one roof.

The 85-year-old Moazzam Jahi Market, the restoration work of which is nearly complete, is set to be transformed into a major cultural center for theatre and music. The Telangana government plans to leverage Hyderabad’s recent inclusion into the Unesco’s Creative Cities Network list under the gastronomy category and transform the market into a cultural hub.

The Nizams did everything in style and grandeur and this historic building stands tall as a testimony to the fact. Yes, even a fruit market was built with the utmost care and calculation. History has it that the market was constructed during the reign of the last Nizam, Mir Osman Ali Khan in 1935, and was named after his second son Moazzam Jah Bahadur. Originally meant to be a fruit market, it soon turned out to be a place where one could find just about anything — fruits, vegetables, flowers, groceries, earthen pots, arms and ammunitions, paan, ice-cream, dry fruits, hookahs, and ittar — and buy them at wholesale prices.

ALSO READ:  They Still 'Addicted' To This 'Secret Ancient Food' Which Exists In 'Old Hyderabad' Areas

In fact, a few traders at the Moazzam Jahi Market say that not many know that this place was once a huge paan bazaar. “Different varieties of paan were sold here. Now, all those shops have gone. The fruit market itself was shifted to Kothapet market in the 1980s and some of the other shops to Begum Bazaar and Osmangunj. The famous Jambagh flower market was a part of the Moazzam Jahi Market but it was shifted to Gudimalkapur market in 2009,” says Ramdeo, a fruit seller, who has been running a shop here for the past 30 years.

Even today, the market boasts of the busiest streets in the city with hordes of visitors. Advocate S B Sinha, whose ancestral property is located just across the Moazzam Jahi structure, and is as old as the market itself, says, “This structure was built especially as a connecting point between the old and the new city. There was no such thing as the old and new city back then, but the spot was chosen because it was in the heart of the city. It was built with the idea that people from every corner of the city could visit this market easily. More importantly, fruits of all kinds would be taken from this market for the Nizams residing at the Falaknuma Palace. The Peshawari fruit shop here is one of the most famous shops.”

Famous ice cream
The ice cream at this market is indeed famous! Even celebrities are known to indulge in it. The Famous Ice Cream shop at this historic structure has become as famous as the building itself. Anybody visiting this area cannot help but stop by to gorge on these hand-made fruit ice-creams. Recalling her love for the same, Elahe Hiptoola, who is now a film producer, says, “I have fond memories of this place. Whenever we had to choose a place to hang out, it would be famous ice cream. The hand-made ice creams give you an appetite of sorts to go on enjoying your ‘hanging out’ sessions. I would ensure that my friends coming to the city, would also visit the place and taste something that they cannot find anywhere else in the world. Also, there is a sweet shop just opposite the market where one can find the yummiest pumpkin halwa.”

Now, that gives you enough reasons to vote for this unique and historical structure as the 7 wonders of Hyderabad. We all know it is. #KhabarLive #hydnews