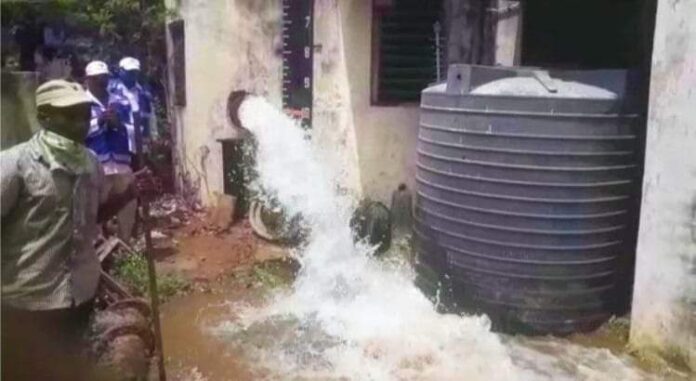 A group of men, allegedly belonging to the BJP, broke into the pumphouse to conduct a #CoronaVirus Shuddhi ‘puja’, chanting Jai Shri Ram. Trespassing in government protected areas are cognizable offence. They performed despite locals interventions and completed the task.

Around one lakh litres of drinking water was wasted in Hyderabad as officials of the Hyderabad Metropolitan Water Supply and Sewerage Board (HMWSSB) were forced to pump it out from a reservoir, after an instance of trespassing at the Risalagadda-Harinagar pumphouse in Hyderabad.

The incident took place in Musheerabad and triggered mild tension in the area. Locals said that a group of people allegedly affiliated to the Bharatiya Janata Party (BJP) broke into the pumphouse, which is under the control of the HMWSSB, and conducted a ‘puja’ to control the spread of COVID-19.

As news of the incident spread, several people gathered and picked up an argument with the group. They even alleged that an unknown substance had been mixed in the drinking water as part of the rituals that were conducted, which could endanger their lives, though this allegation was not substantiated.

“The water is supplied from here to eight colonies, including four bastis where people belonging to Scheduled Castes (SC) communities live. When we saw them and stopped them, they claimed that they are doing a ‘puja’ to ensure that coronavirus doesn’t spread. We immediately alerted the Musheerabad police and also filed a complaint,” a resident told.

As tensions escalated, Greater Hyderabad Municipal Corporation (GHMC) corporator for Ramnagar, V Srinivas Reddy reached the spot along with Musheerabad MLA Muta Gopal and other officials of the HMWSSB.

ALSO READ:  'They Still Die In Labour Room With Pain'

“I condemn the incident which took place. When curfew is in place, if masked people have broken the lock and entered, it is not a small incident. Strict action will be taken by police and the culprits should be sent to jail,” Muta Gopal told.

Speaking to #KhabarLive, Srinivas Reddy said that the water in the reservoir was first treated with chemicals before it was pumped out. The water was pumped out onto the streets as officials could not take a chance, with the state already dealing with several cases of COVID-19. Later, fresh water was pumped in.

“There was no supply to the usual areas from that pumphouse. Instead, water was routed through the Chilkalguda pumphouse directly with the help of gravity. One lakh litres have been wasted,” he said.

“Firstly, they have trespassed into HMWSSB property and we don’t know what exactly happened inside. Maybe it was superstition. If they really wanted to do a ‘puja’ to ward off the coronavirus, they should have done it at a temple, or spoken to the locals and conducted it outside the pumphouse. Trespassing it was unacceptable,” he added.

An investigation official from the Musheerabad police station told #KhabarLive that a case had been registered under various relevant sections of the Indian Penal Code (IPC) for trespass and further investigation was underway. #KhabarLive