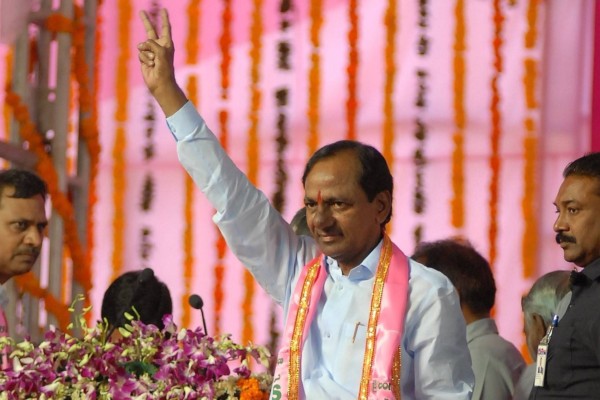 In the penultimate year of his maiden term of Chief Ministership, Chief Minister Kalvakuntla Chandrashekhar Rao, who is completing four years in office on June 2, has unveiled a clear roadmap and spelt a detailed plan of action to play a key role in national politics.

He appears to have firmly set his sight on the Delhi ki Gaddi. During a power-packed speech on the first day of party plenary on Friday, KCR thundered that he would create an earthquake soon and would strive to bring about phenomenal changes in the politics of the country. Lapping up his stance, the party activists responded with a thunderous applause for the grandiose plans of KCR. “Desh ki Neta KCR” slogans rent the air.

A strong votary of cooperative federalism, KCR is said to have drawn his inspiration from the late founder of TDP and former Chief Minister N T Rama Rao to whom goes the credit of rallying all anti-Congress forces in the country on one platform and creating a national front. He virtually created a history in national politics thus, way back in 80s. NTR throughout his political career espoused the cause of strong States vis-à-vis Centre – at one time he even termed Centre an ‘illusion.’

A stronger refrain is now quite evident in KCR who seems to be bent on shaping up a national political alternative to Congress and BJP to seize the power in Delhi. His express motto: Vest Centre with only essential subjects like Defence and leave the rest to the State. He questions why Centre has to decide on certain subjects which are essential preserves of the States.

Addressing the gathering at the party plenary held at Kompally, he held forth on how he would like to go about achieving his objective. He gave a broad outline of the new non-Congress non-BJP federal front. One gleans in his decision to go national vestiges of late Tamil Nadu CM Jayalalithaa’s latent ambition to be India’s Prime Minister one day – there were posters too to that effect. It is believed that Jaya’s decision strongly spurred the cadre and people of the state alike, resulting in a windfall for AIADMK which won 37 out of 39 Lok Sabha seats in Tamil Nadu, even when the entire nation was swept by the ‘Ab Ki baar Narendra Modi’ wave.

In the wake of non-fulfilment of many a promise made during elections, a general gloom over certain policies of the Modi government viz., demonetisation and skewed launch of GST, and resentment of masses over apparent saffronisation of politics, one discerns Modi’s popularity graph has plateaued and even started a downward descent. A feeling that BJP may not be able to clinch the magic figure to form a government on its own is spreading into masses by the day.

Though KCR had hitherto been seen as a Modi supporter, he now holds several grouses against the Centre, chief among which are Centre’s unwillingness to support 12 per cent reservation quota for Muslims in Telangana, and delay in release of funds to the State etc. Though the initial response to the proposed front has been lukewarm, KCR is unfazed and sounds certain that it would gain pace in the months to come. He has lined up visits to various parts of the country to rope in regional parties to partake of his dream.

KCR has certainly raised the bar for himself, hoping to repeat his stupendous success in state politics in national area, too. There is no denying that he faces the gigantic task of bringing disparate parties and leaders in the hope that they too long to make their States stronger than before. Coming months will witness a KCR holding up a great hope for the nation, promise to usher in a great disruption in national politics. He would dare the people of India, particularly the leaders of regional parties, to dream big. Of course, only time can tell whether he will be successful.

As of now, he ought to come out with a national agenda that stands quite apart from those held aloft by other national parties i.e., BJP and Congress. The biggest challenge is win over the Hindi belt. The recent visit of KTR to UP to closet with former CM Akhilesh Yadav is sure to raise eyebrows in other states. It remains to be seen if the leaders in the North would agree to be led by KCR as the PM face during the next elections. A loosely held coalition not spearheaded by a strong leader is like pitting minnows against a giant, who in this none other than Narendra Modi under whose charge BJP juggernaut is rolling into state after state. Thus, KCR is in a way directly taking on Modi himself.

KCR’s game plan, however, would not pan out even partially unless TRS sweeps Telangana, lest he would not be reckoned a strong man by other parties to troop behind him. Of course, all this is premised on the outcome in which Modi fails to win a majority on his own. Though Congress has of late made some inroads and has been able to partly regain the lost ground, at this point of time, it doesn’t inspire confidence that it is on course to come back to power.

Analysts aver that KCR during the last four years proved himself a Man of Development. The government has launched many a mega scheme, some not even envisaged by any leader hitherto. His impression is cast in every sector one can conceive. The State has earned laurels under his watch, whether it is in the case of Ease of Doing Business, governance reforms, policing, investments or socio-economic welfare plans. For an instance, a quick survey shows people are happy with the changes that have been brought about in education after the bifurcation of the state.

I won’t say it is 100% achievement or perfect, but the efforts are certainly in that direction, ushering in important changes. A ‘Golden Telangana,’ dream held out by KCR is shaping up for sure, one should concede, notwithstanding certain grave issues here and there. Irrigation projects will be among best showpieces of his good governance. He has succeeded in completing long-pending projects like Kalwakurthi, Nettampadu, Bheema and Paleru reservoir.

The flagship project Kaleshwaram is progressing very fast. Mission Kakatiya has seen nearly 50 per cent of water bodies revived. Mission Bhagiratha is aiming at drinking water through tap to every house in villages and urban areas as well. While Rythu Bandhu will win over the farmers, welfare schemes for minorities are another recipe for sure success, it so seems.

Fuelling KCR’s mega welfare schemes and programmes is the sound financial position of the state, reflected in surplus budget year after year. Tax collections have been quite buoyant. Among his schemes, only 2BHK scheme is not progressing at the pace it should be.

To relieve him of the State responsibilities, KCR would want to hand over the mantle of administration to his son KTR. KCR may not focus on negative aspects of either Congress or BJP, but would want his front to win people’s mandate on its own merit and objectives. He feels the time to realise cooperative federalism is now. To win the rural India, one can see him stirring hopes in farmers with his ‘Har acre ko paani, har kisan ko paani’ (Water for every acre – water for every farmer).

However, KCR needs to keep in mind the past experiences of various fronts that were formed. In 1977 India witnessed a similar type of movement that displaced the Congress government at the Centre and brought the first non-Congress party to power. But it ran only for two years due to skirmishes among its disparate leaders. And soon came back the Indira Gandhi government. What KCR needs to ensure is that the parties under the new front umbrella don’t bring along their baggage which is inimical to the core objective and can harm the front itself. #KhabarLive