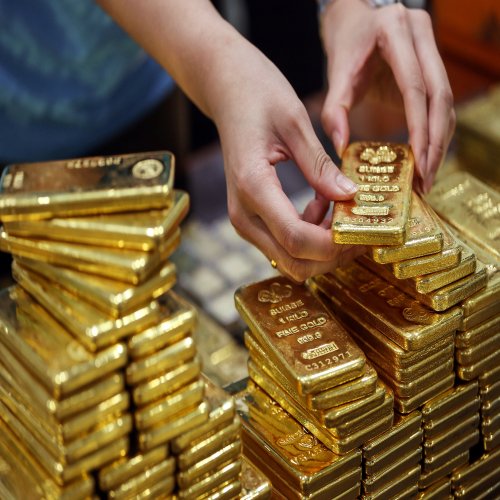 Economic uncertainty across the globe has increased the appeal of the yellow metal among investors. This makes it a good store of value in the near future.

Dharmesh Solkar, a Hyderabad-based middle-level IT professional, decided to go for a week-long summer vacation to the Maldives when he got promoted in November last year. He and his wife Surabhi, a home maker, had been planning the trip for years. They had to cancel due to the Covid-19 outbreak.

Soon, he started worrying about the future when he heard about jobs cuts across sectors. In 12 years of his working life, he had saved little. The Rs 2 lakh he had set aside for the trip was lying in his savings account when he got a call from a jewellery chain’s executive, who gave him gold price data from as far back as 1923 to March 31, 2020. “Since 1925, when a sovereign of eight grams was priced at Rs 13.75, prices never went down till 2014,” he said. As Solkar saw prices hit historic highs of Rs 54,000-plus per 10 gm this year, he thought he had missed the bus. But a few days later, the relationship manager mentioned the ‘Independence Day Freedom Offer’, a discount of nearly Rs 3,000 for eight grams, for purchases on August 15. Dharmesh bought a small diamond gold chain for his wife.

While Covid-19 has ruined businesses around the globe, including the gems and jewellery business, the yellow metal is still shining as a key instrument for creating wealth, even as the industry is still undergoing Covid-19 turbulence. Consider this: Gold has been the best investment in the past five years and returned 17.7 per cent per year, far ahead of equities, which have returned 7-8 per cent, and even real estate, which has returned a mere 5.3 per cent per year during the period. With economic uncertainty worsening across the globe, investors will increasingly add gold in their portfolio for safety. A weakening dollar (also considered a safe haven) is also good for gold. Industry experts say the yellow metal will remain a preferred investment in future as well.

ALSO READ:  ‍Now, Get '‍Gold Jewellery' Delivered At Your Doorstep!

Wealth in Crisis
Dharmesh is not an exception. A new set of young customers, who used to spend on lifestyle products, vacations, dining and entertainment, are now investing in latest fashions in jewellery, says Ramesh Kalyanaraman, Executive Director of Kalyan Jewellers. Middle-class senior citizens, who either kept money in fixed deposits or real estate, are also increasingly buying jewellery for their next generation. With restrictions on number of guests, weddings have become a closed family affair. A part of those savings is being used to buy jewellery for the newly-weds.

Even diamond sales are picking up. De Beers Group, the worlds largest diamond producer and retailer, witnessed about 30 per cent growth in India last year, but Covid-19 slowed the momentum. “Demand is gradually growing in Tier-I cities and sales may get back to 70-80 per cent of last year’s level by October-November,” De Beers India Managing Director Sachin Jain said last week at the 9th Edition of the Forevermark Forum. Nancy Liu, CEO, Forevermark, a brand of De Beers, says people with disposable incomes in countries such as China and the US are increasingly investing in diamonds. In India, the main attraction is jewellery. India is the second-largest consumer of gold in the world after China. Indian households stock the largest amount of gold in the world, estimated at around 25,000 tonnes.

ALSO READ:  Why 'January 26' Is Celebrated As 'Republic Day' Of India?

“The nationwide obsession with gold apparently reflects in the form of wearing of jewellery on social and religious occasions, occasion-based gifting and purchase on auspicious days like Akshaya Tritiya and Dhanteras. However, the underlying theme of that endless fascination for the yellow metal is predominantly investment,” says M.P. Ahammed, Chairman, Malabar Gold & Diamonds, among the largest jewellery retailers in the world with about 260 showrooms in India and abroad. Demand is set to grow further as market volatility and economic uncertainty have added to its safe-haven status, says Ahammed.

However, 2020 has not been good for the industry so far, despite high gold prices internationally due to Covid-19, economic slowdown and US-China tensions. According to data from the World Gold Council, during January to June, jewellery sales in India were 117.8 tonnes, a 60 per cent drop in volume terms compared with same period last year. Gold as an investment (bars, coins and exchange-traded funds) witnessed a fall to 47.8 tonnes worth Rs 18,600 crore in the first half, a 19 per cent fall in rupee terms and 39 per cent in volume terms as retail shops and bullion dealers were closed until mid-May.

Hopes Shining Bright
“Due to uncertainty and fear, demand had gone down, but sales trend during the window of opportunity afforded by relaxation of the lockdown points to healthy latent demand that should surface once Covid is behind us,” says Somasundaram P.R., Managing Director, India, World Gold Council.

Trade is sensing optimism as people are coming back to showrooms due to festival season and starting to learn to live with the virus. “The demand for physical gold, majorly channelised through jewellery, could be impacted to a certain extent due to the economic scenario, but it will become stronger once the economy is back on track,” says M.P. Ahammed.

The retailers are adapting to the new realities. Kalyan, which is soon planning an initial public offer despite the Covid-19 crisis, recently launched a branding campaign related to weddings as a closed family affair. “It was a hit. Our online sales are also growing,” says Ramesh Kalyanaraman.

Sachin Jain of De Beers India says their diamond video campaigns were witnessed by 52 million people and their online counters have got 3.4 million visitors since the Covid-19 crisis. Forevermark launched a digital B2B site last week and digital showrooms that provide customers an experience similar to physical showrooms.

Online buying convenience is playing a significant part in consumer behaviour, say experts. Digital gold sales are also picking up, though volumes are negligible in the overall demand scenario. “We are still in the midst of the crisis without clear sight of many variables about consumer behaviour, prices or length of the disruption. We will not be able to quantify the impact on full-year gold demand in India,” says Somasundaram.

It is a time of optimistic wait and watch for the industry and investors. #KhabarLive #hydnews