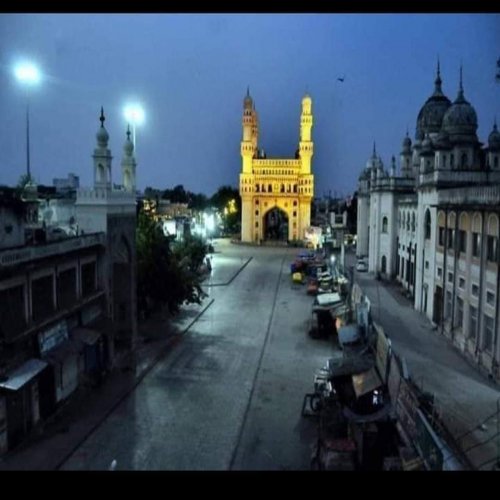 The coronavirus-induced lockdown in effect, the holy month of Ramzan began on a subdued note in the historic city of Hyderabad, famous for festivities. The streets, which used to come alive with shoppers with the onset of Ramzan, stayed almost deserted with people struggling even to buy groceries, vegetables and other essentials.

With the night curfew in force, people received the news about sighting of moon through television or social media. Relatives and friends greeted each other over phone and prayed for an early end to the pandemic.

Hyderabad, with a rich Muslim heritage, will not just be missing the spiritual ambience that envelopes the city during Ramzan but also the unprecedented month-long economic activity and the feasts with lip-smacking dishes.

The centuries-old markets around historic Charminar and Mecca Masjid, the hub of Ramzan festivities, wore a desolate look.

Thousands used to throng the 17th century mosque, one of the biggest in India, while the markets surrounding it would be abuzz with people shopping for everything — from bangles to ready-made garments to household items.

In normal days, traffic moved at snail’s pace with vendors selling fruits, dates, perfumes and other goods, occupying footpath. Hotels and road-side eateries did brisk business selling ‘haleem’, a special delicacy of Ramzan, ‘Dahi bade’ and other food items for ‘iftar’ or breaking of fast.

Citizens said they had never seen a Ramzan like this in their lifetime. “We have seen difficult times during Ramzan on a few occasions, either because of rains or law and order issues. But there have been nothing like this. It’s really painful,” said 78-year-old Rafeeq Ahmed, who resides near Charminar.

The last time when the city had witnessed a Ramzan like this, it’s said, was in 1908 due to massive floods in Musi river. The floods that began on September 26 had washed away homes in a large part of the city, killing around 15,000 people.

The lockdown has been extended in Hyderabad and the rest of Telangana till May 7 and citizens believe even if the lockdown is lifted the remaining part of Ramzan may not see revival of economic activity due to restrictions.

Religious scholars of all schools of thought have urged people to offer prayers at their homes. In addition to five regular namaz a day, mosques during Ramzan used to see ‘Taraveeh’, special prayers every night during which the holy Quran was recited.

People used to gather at mosques every day for breaking the fast. Hundreds of people, including women, would join iftar on the sprawling laws of Mecca Masjid. Individuals, organisations, political parties and even the government organised iftar, highlighting communal harmony and Ganga-Jamuni tehzeeb.

Due to the COVID-19 and lockdown, ulemas have appealed people not to host iftar. They have been advised to have both sahar (pre-dawn meals) and iftar at home.

Aazan (call for prayers) from mosques are continuing but restrictions on congregational prayers remain in force. Similarly, blaring of sirens to announce the end of sahar and begnning of iftar will continue.

Home Minister Mohammed Mahmood Ali asked officials to allow azan and use of siren at mosques. He said people can continue to buy fruits and other essentials during the day. Chief Minister K Chandrasekhar Rao, his cabinet colleagues, leaders of various political parties and eminent personalities greeted Muslims on the commencement of Ramzan.

“May this auspicious month further the spirit of harmony, happiness and brotherhood in our society,” the Chief Minister said. #KhabarLive