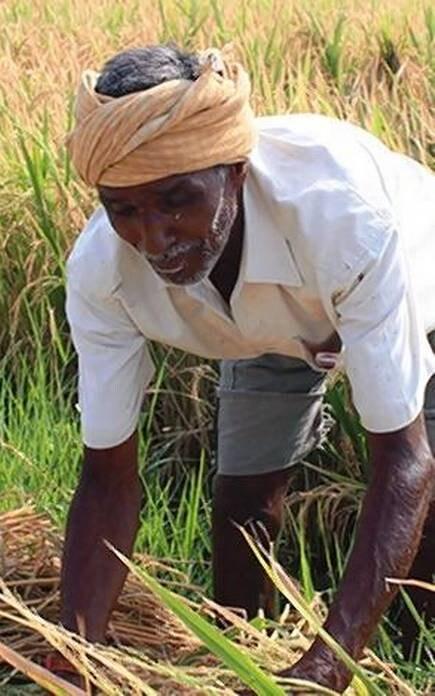 Farmers in Telangana and Andhra Pradesh could be heading for a major crisis as the 21-day nationwide lockdown to contain the spread of Coronavirus has affected the harvest of Rabi crops.

Though agriculture is exempted from the lockdown in both the states, a majority of farmers are scared to come out of their homes. Shortage of agricultural labourers has added to their woes.

The lockdown dealt a blow to the agricultural sector at a time when crops like paddy, maize, red jowar, pulses, chillies are ready to be harvested.

With the agricultural markets shut, the state governments have told farmers not to come to the towns with their produce but wait in their respective villages for procurement by authorities.

With no hopes of an early return to normalcy, the farmers are keeping their fingers crossed despite assurance by the governments that all their produce would be procured.

While exempting agricultural activities from the lockdown restrictions, Chief Minister K Chandrashekar Rao said farmers would be allowed to complete the harvesting of the crops spread over 50 lakh acres.

However, non-availability of agriculture labourers has hit the farmers hard. Many labourers have gone back to their native states due to the lockdown and those available are demanding higher wages, complained many farmers.

“No one is coming out due to lockdown. If there is a delay of another 10-15 days in harvesting, the paddy crop will get damaged,” Rythu Sangham leader S. Malla Reddy told #KhabarLive.

The Telangana Chief Minister last week asked the farmers not to visit the markets to sell their produce. “We will get it procured in your villages. All you have to show is your passbooks. We will give you tokens informing you about the time and date of procurement and will remit the payments directly into your bank accounts,” he said.

The state hopes to purchase about 38 lakh tonnes of paddy, and the procurement was expected to begin from April 1. Procuring paddy from all the farmers in the state is estimated to cost Rs 35,000 crore.

However, the farmers’ leaders are not convinced about the government’s assurance. They point out that 15 days ago when there was no coronavirus scare, the government failed to procure 1.5 lakh tonnes of red gram from farmers and the Agriculture Minister even admitted that the government had no money to pay the farmers.

“When it had no money to procure the produce when everything was fine, how will it procure now,” asked Malla Reddy, general secretary of All India Kisan Sabha.

He believes that with no money in hand and banks refusing to give fresh loans, the farmers may struggle to go for cultivation in the Kharif season, which begins in June.

He claimed that the banks were refusing to give fresh loans because the government failed to release funds towards the waiver of farm loans. The farmers depend on private money-lenders for cultivation.

Reddy said a survey conducted by his organization revealed that farmers get Rs 20,000 crore from private money lenders at higher interest rate — 30 rupees for every hundred rupees for six months.

“This time, even the private lenders may have no money as the flow of funds will be badly hit due to the impact of lockdown on the overall economy,” social entrepreneur V. Naveen Kumar told #KhabarLive.

While paddy farmers can wait for procurement by the government, maize and red jowar growers are the worst hit as the coronavirus has dealt a big blow to the poultry industry. With lockdown, consumption of maize and jowar has come to a complete halt.

“The good thing about paddy is that entire stocks available with farmers can be purchased by the government because rice is a staple but bulk of maize and jowar is purchased by poultrers from February to April. Nobody knows as to when the poultry industry will recover,” said Kumar, who is the founder and managing director of NaPanta, a mobile app catering to farmers in both the Telugu states.

The normal area under paddy cultivation in Telangana is 17 lakh acres but this year it has more than doubled. The maize area also increased to 5.84 lakh acres against the normal 3.72 lakh acres.

The horticulture crops have also taken a huge hit by the lockdown. With transport coming to a complete halt, farmers are unable to take vegetables and fruits to the markets in town.

Banana, watermelon, tomato and chilli farmers in Andhra Pradesh too are badly affected by the situation. “You can’t store bananas. If there is a delay of one week the entire crop goes waste. There are no buyers. We may a see a situation where farmers will dump bananas like what we have seen with onions and tomatoes on many occasions in the past.”

Mango farmers in both the states will also be badly affected by the lockdown. They are the major producers of the king of fruits and with lockdown in force they stare at a gloomy season.

The two states have over 1.20 crore farmers and 70 per cent of their households depend on agriculture.

Kumar believes that a new thought process is what can help farmers tide over the crisis. “Local consumption of perishables like vegetables and fruits should be encouraged. The farmers may adopt barter system to minimize their losses and this can see them through these difficult times.” #KhabarLive