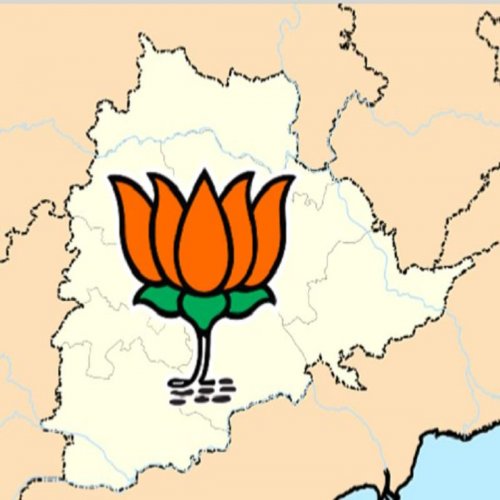 Despite all political plans and actions, Telangana BJP struggling hard to get ground to explore the political possibilities among good books in the state. Though Telangana is not poll-bound in the near future, the BJP is upping the ante and hopes to edge out the Congress.

The BJP hopes to settle for second place, edging out the Congress, in Telangana politics. The rancour, bitterness and war of words that culminated into a street fight between the ruling TRS and the BJP in Warangal serves as a pointer to the BJP’s ambitious plans.

The much criticised handling of the COVID-19 crisis by the K Chandrasekhar Rao (KCR) government that has dented his image as the “Telangana Bahubali” and the chinks that surfaced in the armour of the Congress-led government in Rajasthan seem to be giving rise to the BJP’s hopes to fill the vacuum in the state.

A verbal attack by BJP MP D Arvind lambasting KCR sent TRS cadres into a rage, leading to an attack on the BJP’s Warangal office. Subsequently, tempers ran high with a charged political atmosphere across the state. Though Telangana is not poll-bound in the near future, the BJP is upping the ante.

Sanjay, belonging to the predominant Munnuru Kapu community from the Backward Classes (BC) community who defeated KCR’s close aid Boyinapalli Vinod Kumar at the Karimnagar Lok Sabha seat in 2019, has been tasked with taking on the KCR government and countering the expansion of Asaduddin Owaisi’s All India Majlis-e-Ittehadul Muslimeen (AIMIM) simultaneously.

The current Telangana BJP president is one of the very few leaders chosen from outside Hyderabad to head the state wing of the party after M Venkaiah Naidu, current Vice President of India, Vidyasagar Rao, former Governor of Maharashtra, Chilakam Ramachandra Reddy and DSP Reddy.

Telangana, with its history of communal divide right from the period of the Nizam’s rule, provides fertile ground for the BJP to grow. KCR’s alliance with the AIMIM came in handy for the national ruling party to capitalise on the widening religious divide.

An army of workers from the RSS and its front organisations provide a strong cadre base for the party. The national elections in 2019 saw the rise of BJP in the state with four Lok Sabha seats.

However, the BJP’s windfall in that election could be mainly attributed to the Modi wave, but not to the party’s real strength on the ground. This assumption holds water given the party’s poor show in the 2018 state elections in which it ended up with just 7.07 percent of the vote share and a single legislator.

Unlike the BJP, the Congress has a consolidated vote bank across the state. The Grand Old Party secured 29.48 percent of votes over the BJP’s 19.45 percent in the 2019 national elections. But the Congress became a party with voters bereft of leaders with a mass following. KCR pushed the party into the brink of extinction with his predatory politics, leaving its cadres disillusioned.

Political analyst Tirumali Inukonda believes that the Congress departing from its Scheduled Caste-Backward Classes base, built by its stalwart leaders Damodaram Sanjeevaiah and PV Narasimha Rao, and its inability to get out of the “Reddy trap” are the reasons for its downfall in the two Telugu states.

Unmindful of its repeated electoral debacles right from the first election Telangana faced as a new state in 2014, the State Pradesh Congress Committee failed to have a change of guard. N Uttam Kumar Reddy continues to be the state party president since then.

The era of icons within the Gandhi family who, in the past, could help the party hold on to power with their charisma is gone. The party does not even have crowd-pullers like the YS Rajasekhar Reddy who rode the Congress to power twice at difficult times in the erstwhile undivided state of Andhra Pradesh, Tirumalai said. #KhabarLive #hydnews