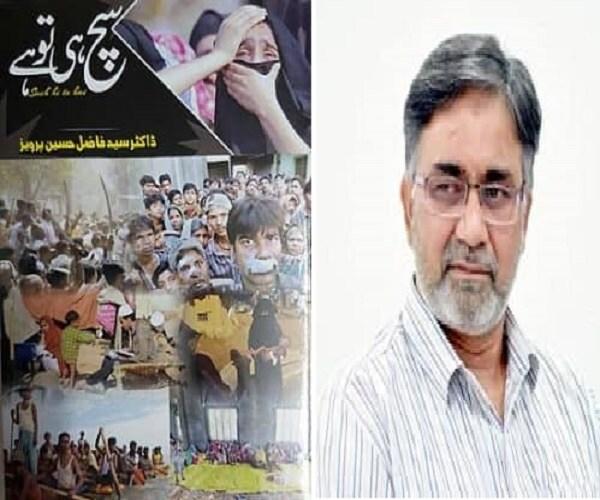 An editor with a queer sense of literary sweetness – Dr Syed Fazil Hussain Parvez’s subjective, honest and empathetic urdu editorials have been tugging at the heartstrings of readers for two decades.

It was an emotional scene… Aged mother… her eyes gone dry shedding tears. Her wrinkled face gives hint of the inner turmoil. A young wife … keeping alive hopes of her husband’s return, her face devoid of feelings. And yonder her husband – Kulbhushan Jadhav — with downcast eyes — sea of tears ready to break the barrier of eye-lashes and course down the cheeks. A glass screen in between … communicating through an intercom device.

The entire country is queued up before banks now. How the morning passed, how the afternoon went by, when dusk set in and when night spread — none is conscious of it. All eyes are fixed on the gate of the banks. As the men and women inch forward in the queue, there is hope and a glance backward reassures that we are much ahead of others. And those who manage to lay hands on a few notes after hours of waiting emerge with a victorious smile.

A page out of a novel? No. These are idaria (editorials) capturing the brief meeting of the alleged Indian spy with his mother and his wife at the Foreign Office in Islamabad and the serpentine queues seen before banks following demonetisation of currency notes. What is strange about these editorials is that they tug at your heartstrings and move you to tears.

Urdu weekly Gawah is setting new benchmarks in viewpoints. So, what’s its speciality? Its literary flair and engaging style! Usually, most readers catch up with the headlines and a few care to go through the editorial. And still fewer read it for the second time. Journalism is that which is grasped at once while literature commands a second and even third reading. Dr Syed Fazil Hussain Parvez’s editorials in the Gawah belong to the last category. In fact, journalism is literature in hurry.

And Parvez lives up to the adage. Week after week, he comes up with editorials which have narrative techniques and stylistic devices usually found in fiction. This kind of narrative journalism is rare in Urdu media. The story is real and so are the characters mentioned but the focus and description differ. Parvez zeros in on the lives of people affected by circumstances or institutions. And what follows is a story that shakes readers out of complacency.

Last week, his second book of editorials — Sach Hi To Hai — was released. It contains 92 select editorials written in 2017. The best example of creative nonfiction, the book gives not just a peep into the past events but also a lot to ponder over. Parvez is not merely a journalist but a moralist too. He draws inferences, makes a statement and leaves a message. He makes use of all the literary devices at his command — narrative, persuasive and descriptive. Usually, he wraps up his articles with a couplet which sums up the point he wants to make.

For instance, when he wrote about Mukesh Ambani coming to the rescue of his sibling, Anil Ambani, by clearing off his outstanding dues and fending off a possible jail term, he gave a human touch to a purely business story. Hailing the brotherly gesture of Mukesh Ambani, Parvez says:

Much has been written about the lavish weddings in Muslim community, the unearthly hour at which dinner is served — not to speak of the late-night band-baja-baraat. Parvez wields his pen to portray a true picture of the Hyderabadi shaadi — the way the common man is getting mired in debts in a bid to live up to the false societal standards. The scathing article touches upon the ills of the present-day marriages and ends with Allama Iqbal’s famous verse:

(Although I am not master of rhetoric, Perhaps my words still enter your heart)

Through artfully told narratives, Parvez has been touching the conscience of readers for the last 20 years. The unique thing about his writings is subjectivity, honesty and empathy. And those who want to slake their bookish sweet tooth, there is lot of ‘adbi chashni’ in his books. #KhabarLive