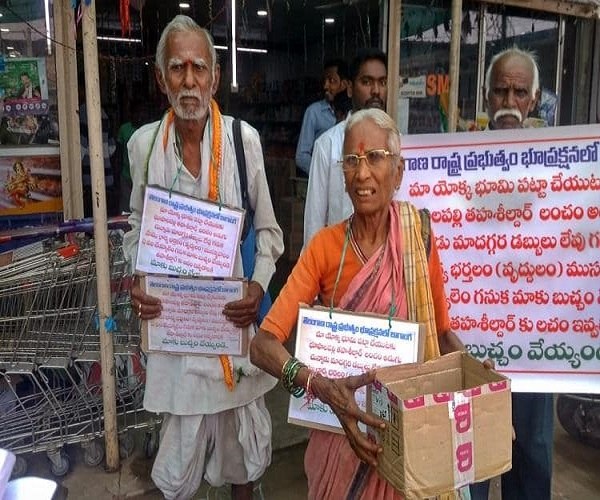 Following the protest and uproar staged by the couple, higher authorities took note and ensured that they got their documents. A frail woman goes from shop to shop with a box in her hand ‘begging’ for money and explaining her plight. Her husband tags along and so does another person holding a large banner.

“Bhupalapally Tehsildar is asking us for a bribe for our land ‘patta’ (document). Since we are an old couple and retired, no one will give us work. Therefore, we are begging to pay for the Tehsildar’s bribe,” the banner reads.

The video from Telangana’s Bhupalpally town in Jayshankar Bhupalpally district has gone viral and has resulted in many questioning the apathy of the administration.

The couple alleged that a few acres of their land had been grabbed and was under dispute and they wanted the Mandal Revenue Officer (MRO) to look into the matter. When the official refused to look into the matter until a certain bribe money was paid, the couple took to the streets in complete desperation with placards hanging around their necks, asking people to contribute to the bribe money.

“When we asked for a passbook for 10 acres of land that was assigned to us, he (MRO) kept delaying it and said that he will give it later. But he kept citing different reasons. We don’t have any money, so we decided to beg and pay him some money,” the old man says in the video.

The couple were said to hail from Azamnagar village and were seen covering a stretch on the Bhupalpally main road.

“Where will we get so much money from?” the woman is seen asking, later adding, “We offered him Rs 50,000 but still he refused to do it. He wanted more than Rs 1 lakh. We have mortaged everything and we are debt ridden. How will we get the money?”

Speaking to #KhabarLive, a man who owns a shop where the couple went asking money, said, “They came at around 2 pm today (Friday). They wanted to highlight their plight and they were really old and fragile. Many of the shop owners contributed money.”

“They visited many shops along the Bomma Centre area in the town on the Bhupalpally main road for the same purpose and then went away. We don’t know what happened after that,” the shop owner further said.

However, after the desperate protest staged by the couple, Jayashankar Bhupalpally Collector Vasam Venkateswarlu reportedly took note of the incident and the couple received their land documents from the Revenue Divisional Officer (RDO). An internal inquiry was also launched. #KhabarLive