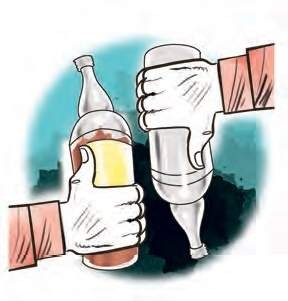 On an average, not more Rs 50 crore worth of liquor cases are bought from the depots per day across the state.

Members of the AP State Wine Dealers Association (APSWDA) purchased liquor worth a whopping Rs 400-crore from the Excise Department’s depots a mere three days before its April 25 “no purchase” protest demanding that trade margin be raised to 18 per cent from the existing 9 percent.
On an average, not more Rs 50 crore worth of liquor cases are bought from the depots per day across the state.

Officials of the Prohibition and Excise Department told KhabarLive the protest was a farce and confirmed that owners of wine shops and bars had stocked up on alcohol before embarking on the stir.Responding to the demand, Chief Minister N Chandrababu Naidu said the government would examine the issue “if the problem was genuine”, before quickly adding that he would not succumb to threats of any kind from anyone.

ALSO READ:  'Blue Cross' Takes Off After Selling Thousands Of 'Cows To Abattoirs' In AP

Liquor sellers claim heavy losses due to the removal of unauthorised outlets (belt shops) while seeking bloated margins as compensation. “We will first have to study the situation to understand the problem and ensure that there is no loss,” the Chief Minister added.

However, reliable sources in the Prohibition and Excise Department told KhabarLive that he loss cited by the liquor merchants was completely false and pointed out that they were earning more despite the decrease in sales margin as the licence fee of A4 shops had dropped by 75 per cent, costing the government Rs 1,500 crore in the beginning of the excise year.

Stating that liquor cases worth Rs 81.50 crore, Rs 138.50 crore and Rs 170.93 crore were purchased from Excise Department depots on April 21, 23 and 24 respectively, an official of the department joked that he had never in his life seen such a startling demand for alcohol.

“This indicates that the merchants are acting with the sole aim of pressuring the government. The strike is nothing but a drama. Business continues as usual,” he said.The fee for A4 shop licence dropped drastically from Rs 65 lakh to Rs 16 lakh in the excise year which commenced on July, 2017. The dip prompted officials to impose an Additional Excise Duty (AED) to recoup lost income.Despite the charge, dealers make enviable profits.

Meanwhile, APSWDA president Rayala Subba Rao lamented that merchants had no choice but to avoid purchases. Admitting that 400 of the 5,200 odd members of the association were still purchasing stocks, he said APSWDA was not forcing anyone. Despite Additional Excise Duty, merchants make enviable profits with the government implementing Maximum Retail Price without any deviation, official sources explained. #KhabarLive