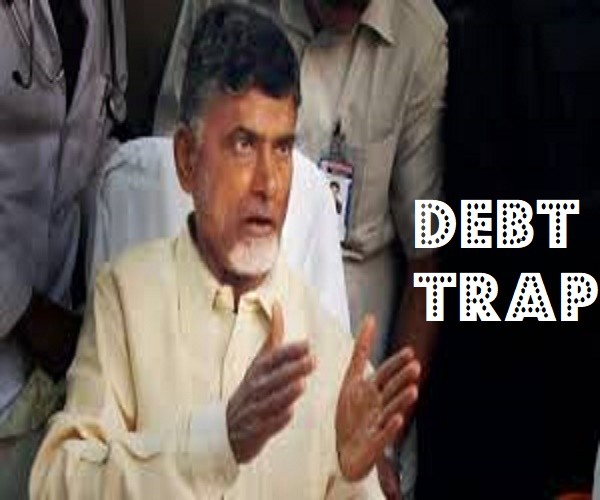 There has been a concern expressed in the economic circles that the Government of Andhra Pradesh is bent upon falling into a debt trap. The indications are that the size of the public debt has grown disproportional to the earning capacity of the State.

It can be viewed from the point of view of certain parameters such as the volume of debt, debt-to-GDP, interest commitment, and interest as percentage of own tax revenues.

Reckoning of the position on these parameters makes one believe that there is lot of inbrooding in the finances of the State. To be more precise, the State of AP has inherited an amount of Rs 1.04 lakh crore as its share of debt at the time of bifurcation (being done in the population ratio of 58:42).

After the assumption of the office of the present government, the volume of the debt galloped to the peak of about Rs 2.25 lakh crore. It appears that there is consistency in the pursuit of debt by the government at the rate of about Rs 25,000 crore annually. As a per cent of State GDP, the debt outstanding worked out to about 29 per cent.

This debt outstanding is to be considered the highest by any reckoning. What is worse is that the interest commitment of the State is growing at an alarming rate of about Rs 15,000 crore per annum. This works out to about 23 per cent of the own tax revenue of the State, as per the Budget Estimates of 2018-19.

While revenue deficit has been a whopping figure of Rs 17.194 crore in the annual accounts of 2016-17, it has been slashed down significantly to the level of just Rs 4,018 crore in the Revised Estimates of 2017-18 and the revenue deficit is projected to be surplus of Rs 5,235 crore. This is incredible! Nowhere, in the history of the finances of the Centre or the States, such a turnaround has happened.

Therefore, it remains quite unbelievable as to the improvement of the financial condition of the State of Andhra Pradesh. The irony of the situation is that while there has been such a transformation being projected, why shall there be a pleading to the Central government to revise the threshold limit of fiscal deficit from 3 per cent to 3.5 per cent of the GDP! This looks inconsistent and absurd.

Another point of gloom to the Government of AP is that there was no transfer of Central assistance in the past four years as expected. There remained a huge gap even in the transfer of the share of the State in Central Taxes. As per the report of the Fourteenth Finance Commission, the State was listed in the category of revenue-deficit States and for AP it put the figure for the Five Years (2015-20) at Rs 22,113 crore. Though there has been assurance to this effect, the actual transfers remained at the lowest ebb, making the State’s finances very precarious.

The issue of the revenue deficit for the year 2014-15 still remains unresolved. The State could not even get a better deal even in the transfer of funds under Centrally sponsored schemes (CSS). The Centre has allocated Rs 2.78 lakh crores during 2017-18 to the 28 core of the core and core schemes and provided Rs 3.06 lakh crore in the budget of 2018-19. Of this, the State of AP’s share has been drastically reduced; while the Government of AP has put up a claim to the tune of Rs 16,447 crore for the period 2015-16 to 2019-20, the Centre maintains that the State is eligible for Rs 12,700 crore only.

This is a big setback to the already vulnerable position of the State. That the State’s financial position is on the slippery ground is also evident from the very Budget Estimates of the State for 2018-19. On account of grants-in-aid from the Centre, the Finance Ministry of the State has projected that it would be in a position to receive Rs 50,696 crore during 2018-19; whereas the State could receive only Rs 23,346 crore under this head during 2016-17. There does not appear to be any logic in this projection, except to inflate the Budget Volume to the level of Rs 1.91 lakh crore (about 21.6% increase over the previous year).

In the aftermath of the cessation of relations by the ruling government at the Centre and States, these high volume projections of the revenues and growth rates at 10.9 per cent are acting as the cog in the wheel.

Therefore, it is imminent for the government to make these projections realistic and be meaningful in tackling the existing precarious position. Instead of indulging in blame game, it would be wiser to explore avenues for strengthening the finances of State.

It is in this context, the following agenda may be pursued honestly by the government.

ALSO READ:  The 'Last Days' Of The 'Last Nizam Of Hyderabad' State