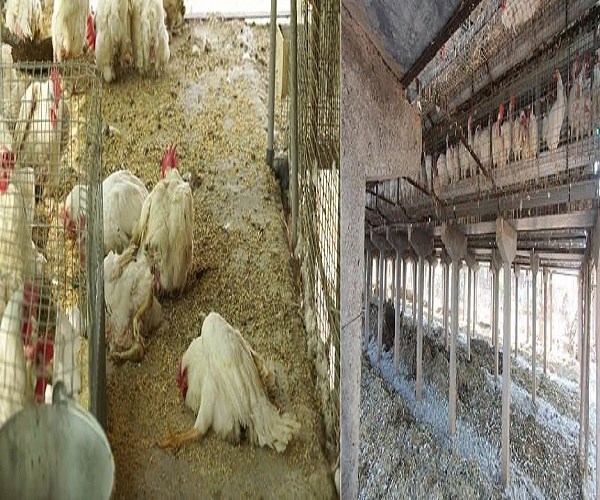 The study conducted in 4 states including Telangana and Andhra Pradesh found many cruel practices such as overcrowding, and the birds living in their own excrement for weeks.

It is not uncommon to see people hasten up their pace when they pass by places that have hens in cages. The rustling of these hens, tightly packed together in tiny cages, as well as the smell of bird waste, can get quite overwhelming. Picture this though – around four to eight birds crammed together in a cage that is no bigger in area of two A4 size sheets. If they have to move, they must step on each other. They walk in their own urine and faeces, and the excreta of the hens in the cages stacked on top fall on those below.

The eggs we eat and relish come from birds that are kept in these conditions. A study by Animal Equality conducted in Maharashtra, Gujarat, Andhra Pradesh, and Telangana – states known for their egg production – in February 2019 has found these and several other cruel and illegal practices that dominate the Indian egg farming industry. In Andhra Pradesh, Animal Equality covered Gudivada and in Telangana, the Nampally meat market.

Cruel practices
Apart from overcrowding and sanitation issues, researchers also found that hens kept in these conditions were missing feathers and were suffering from abrasions and skin irritations, probably due to the high concentration of ammonia in their litter. Their waste was cleared only once every few weeks after it made huge, stinking piles under their cages.Watch Video Here.

Piles of excrement collect under the cages
The wired floor of the cages also caused the hens to develop sore, cracked and deformed feet. None of these issues were found to be addressed by little to no veterinary care, with sick hens being left to die a slow and painful death.

Further, the male chicks that were born are slaughtered en masse because they will not grow up to lay eggs and are hence deemed useless. Disturbingly, it has been found, acknowledged in the government’s rules also, that the feeds that is given to the hens contains remains of the dead chicks as well.

Why you should care
Hens delivering eggs in these conditions has serious repercussions for humans consuming them as well.

Firstly, the unhygienic living conditions of the birds can not only lead to high mortality in them but also cause diseases in consumers of eggs as well as people working in these egg farms. “We have seen workers and their children working for long hours at the farm and sometimes they live at the farm. Due to the harmful environment at egg farms, workers are known to contract respiratory diseases like asthma and chronic bronchitis,” said Amruta Ubale, Animal Equality’s Executive Director.

Further, because of the unhygienic conditions, the eggs themselves can get infected with pathogens like Salmonella and E. Coli, though they may look completely harmless outside. According to Animal Equality UK, “Many chickens carry the bacteria which can contaminate the inside of eggs before the shells are formed. Eggs can also become contaminated from the droppings of birds.” Salmonella causes diarrhoea, fever, abdominal pain, and vomiting among other things.

What should be done?
This was Animal Equality’s second study into egg farms, with the first one having been done in 2017. The older one exposed “cruel and illegal practices on egg farms.”

The organisation also submitted a study on how farmers can switch over to cage-free housing system. “The cost of transition to a cage-free system from existing infrastructure per bird is between Rs.50-60. In Europe, where battery cages are banned and cage-free systems are in use, farmers are seeing their labour and capital expenses coming in line with conventional housing systems within just a few months of transition,” Animal Equality said.

They are also working with food companies and egg producers, requesting them to source from free-range and cage-free egg farms.

Further, an IPSOS Public Affairs study found that 78% of 1,002 people surveyed in various Indian cities, including Chennai, Bengaluru, Ahmedabad, Delhi and Goa, among others, strongly feel that government should make stronger laws so that animals used for food are not abused. Further, 74% of the respondents said that they were ready to pay more for animal welfare. “Three out of four respondents were ready to pay more to make sure adoption of torture free processes while deriving products from animals,” the study said.

Sick hens left to die with no veterinary care
Amruta added, “The use of any sized cage, in essence, violates what are known as the Five Freedoms, as they don’t enable the animals to express natural behaviours and make the animals uncomfortable, fearful and distressed, as well as more susceptible to diseases. The Supreme Court in its order dated May 7, 2014, embedded ‘Five Freedoms’ in the Prevention of Cruelty to Animals Act, 1960 thereby making it mandatory.”

The Five Freedoms outline five aspects of animal welfare under human control. They were developed in response to a 1965 UK Government report on livestock husbandry and were formalized in 1979 press statement by the UK Farm Animal Welfare Council.

Two months ago, the Indian Ministry of Agriculture drafted the Prevention of Cruelty to Animals (egg-Laying Hens) Rules, 2019 which addressed some of these issues. For instance, the rules mandated that not over eight birds be kept in a cage, keeping record of the total floor area available for the hens and so on, or farm owners’ licenses can be cancelled.

Earlier in 2017, the Law Commission had also come out with its 269th report that addressed stopping cruel practices against egg-laying hens and broiler chickens. #KhabarLive