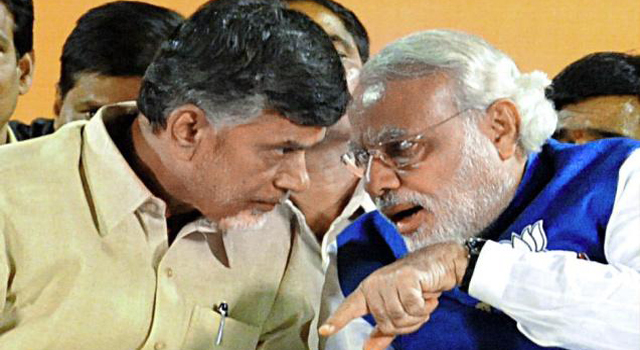 When it comes to outwitting his opponents in political maneuvers and mind-games, Andhra Pradesh Chief Minister N Chandrababu Naidu is almost like a seasoned chess Grand Master, who makes winning moves with gusto.

He has the unique trait of foreseeing possible reactions before he makes a statement. A Machiavellian, whichever way you look at his roller-coaster career, Naidu is always several steps ahead of his friends and foes.

In less than a month’s time, he used the word ‘Supreme Court’. However, he was guarded. Whenever he uttered the word, he took enough care to sound as though he was not adopting any bellicose posture with the Centre but was only making a gentle reminder to it on its several unfulfilled commitments and broken promises to the State.

While speaking to his party leaders on Saturday at the party-government coordination committee meeting, Naidu explained the context in which he referred to the possibility of the State moving the Supreme Court. He said he was only referring to legal recourse as the last resort and that he was not indicating any visceral policy shift vis-à-vis Telugu Desam Party’s alliance with the BJP.

Naidu is understood to have said, “I was only mentioning Supreme Court as an option. We go to the Centre with a set of pleas. If there is delay, there is always the apex court to turn to. I did not mean or imply anything more than that.” It was a clear indication that he would continue to court the BJP.

The first time Naidu referred to Supreme Court was when interacting with the media soon after calling on Prime Minister Narendra Modi in New Delhi after more than a year. He used the words when one reporter wanted to know if inter-State problems could be resolved.

Then on the second and final day of the two-day collector’s conference on Friday at Velagapudi while referring to how the State had been at the receiving end with the BJP forgetting its responsibility to suckle it with its munificence for reconstruction of the capital and execution of Polavaram.

He said he was not seeking anything new or out of turn and that he was asking for what has been promised in the AP State Reorganisation Act, 2014. If this were not possible, there was the Supreme Court for victims like AP to turn to, he seemed to suggest in the context of why the State is unable to free itself from its financial strait-jacket.

As Naidu is keen on delivering a new Andhra Pradesh for its people, it is no wonder that he keeps raising his voice only to the extent that it would not sound as though he was shouting from the rooftop but loud enough for the BJP leaders to listen and read between the lines.

That was the reason why he did not find entertaining the black humour which Vice-Chairman of NITI Aayog Dr Rajiv Kumar tried to come up with saying that AP needed neither special category status nor any hand-holding from the Centre since it has a robust growth model.

Naidu since the day he took over as the Chief Minister of the truncated AP in 2014, has been trying to keep the BJP in good humour, believing that conciliation was the best approach for him since he does not have any bargaining power with the Centre like he had prior to 2004.

He had been saying that he would take whatever the Centre gives besides persuading it for more. As remaining close to the BJP and Modi is essential for him, he bit the bullet even when the attitude of the Centre was sometimes unhelpful and annoying.

He is now not in the mood to end the relationship with Modi, though the latter has not been as enthusiastic as he had been in the long political romantic romp that Naidu has been having with him.

There is another reason why Naidu does not want the duet with BJP to end abruptly since at the back of his mind, there is the nagging doubt that Jaganmohan Reddy might fill the void that he would be creating by exiting from the friendship with saffron party and steal a political march over him.

Since beginning, Jaganmohan Reddy has been eyeing friendship with BJP, threatening to upset the calculations of Naidu in romping home in the next elections as Naidu wants to use Modi’s image this time too like he did in 2014 to win the election.

The BJP too has not been unkind to Jaganmohan Reddy though it had not spelt out the nature of its relationship either now or in the near future. The question remains open-ended, as it probably wants to watch the ever-changing coalition calculus with Naidu.

At the moment, Naidu wants to know about his own stock-value as viewed by BJP and probably that is the reason why he has been referring to legal recourse to watch the reaction from the BJP.

But the very mentioning of it gave a sneak-peak into Naidu’s mind – he wants to see to what extent he could exert pressure without the pressure becoming pain for the BJP and get what he wants. #KhabarLive