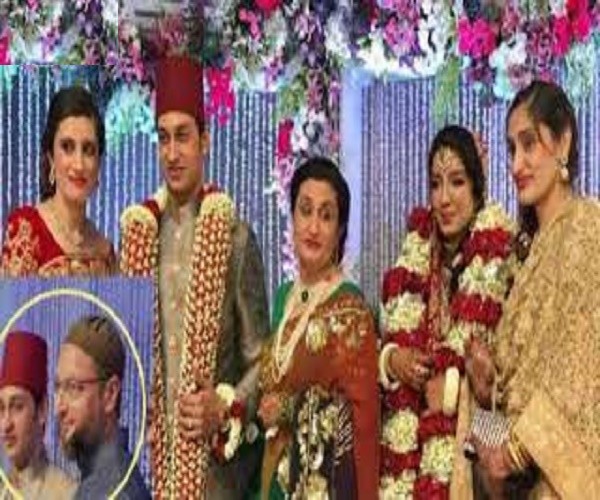 crores of money on the extravagant engagement ceremony of his elder daughter drawing flak from all quarters. The social activists and his political detractors seemed to be pinched by the lavish celebrations. They took to social media to express their displeasure.

It is believed that the family had spent Rs 6 crore for the event, where Rs 1.25 crore was spent only on imported (from Dubai) goldplated plates and flower decoration, while Rs 85 lakh were spent on the venue. Around 10,000 guests were served with 450 types of dishes, some of which never heard of by those who attended the engagement on Saturday. The very next day, another daughter’s engagement took place, but it was kept a low-key affair so as not to attract public glare.

Meanwhile, one of the social activists, working against tradition of dowry, on anonymity told KhabarLive that he immediately spoke to the MP about the matter, as it was setting a bad example for people of the community. He was being told that the matter could be discussed with him personally immediately after Parliament session was over. “The incidents of suicides are growing in the community, as the parents cannot afford to marry-off their girls. The extravagance of this event sends a clear message that the rich can spend lavishly, while the only option left for poor girls is suicide,” he said.

Following day of engagement, an anonymous letter started circulating in social media with the name ‘Hyderabad Parliamentary Voters’, which reminded the MIM chief of his speeches against the lavish weddings. Owaisi, in his speeches, had regularly called for simple marriages. “You once delineated a story of your close friend in your speech who had so many sisters and daughters ready for marriage but he had no money. He is not the one only. There are thousands of such helpless people. When the engagements parties like your daughter’s or wedding parties like Mr Balala’s (MLA) daughter’s get prestigious status in the society, people like your friend can do nothing, but sell out themselves,” cautioned the letter.

ALSO READ:  Will KCR Over Confidence Turns The 'Political Dynasty' Into A 'Disaster'?

Ilyas Shamshi of Reformers Front of India, who shared the details of the menu on social media, said the event was getting attention only because of the money spent by someone who preaches others not to indulge. It was the kind of event which reminded one of the lavish parties at the time of Nizam. “I am not against this kind of events as financially sound person can indulge. But, the people are raising questions only because Asaduddin had asked people to organise weddings in a simple way by offering Osmania biscuit to eat,” he said.

Slamming the Hyderabad MP, MBT leader Amjadullah Khan said it reminded him of Jayalalithaa splurging on her foster son’s marriage, which had alerted the Income Tax offcials who sprang into action then. “People are watching if the man can walk the talk. In his speech in Darussalam, he asked the community to keep marriages a low-key affair citing examples from the marriage of Prophet Mohammed. It is his personal matter. But one should practice what they preach. Why Income Tax department is silent on this and it should have sent notice by now,” he added. #KhabarLive