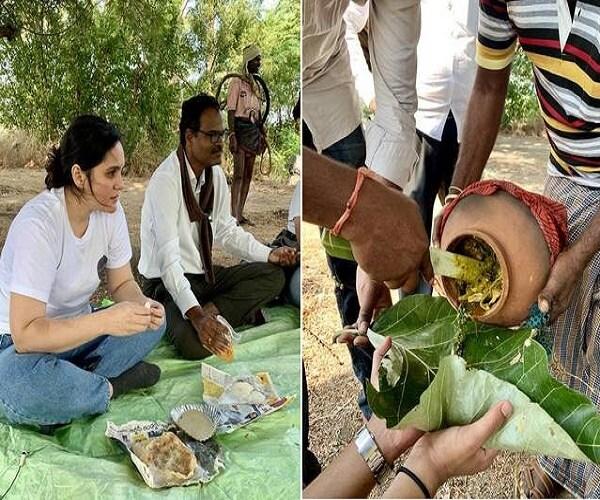 When Mumbai-born Garima Arora, the first Indian female chef — awarded a Michelin star for her restaurant Gaa in Bangkok, voted Asia’s Best Female Chef by Asia’s 50 Best in 2019 — landed in Telangana with her Food Forward India team, they knew exactly what they wanted.

Taste food. Visit places. Learn about food and all that for sure. However, instead of going star hotel hopping and following a traveller’s guide to eat in Telangana, they went deep into rural Telangana, hunting for toddy, looking for dishes that tribal people prepare, sampled Deccan home cooked meals and sipped Irani chai with a several rounds of Osmania biscuits, puffs and what not. The team wasn’t here to simply take notes on recipes.

In fact none of them did. Nor were they interested in packing ingredients or wanting to know what can be used as a substitute to toddy in the toddy chicken. “If toddy chicken needs toddy, there can be no other way of cooking it. There is no need to substitute it. This journey into the heartland of Telangana where toddy tappers opened their homes to us was an overwhelming experience. It is steeped in a culture and tradition which many of us don’t know. For me regional and traditional food is more than what is served to eat. It is a way of life that has been going on for generations,” said Garima.

In line with her vision, Food Forward India (FFI) will rediscover the narrative around the food of India at home and bring it to the attention of international gastronomy and change stereotypical views.

Why Telangana? The idea was to capture the food identity of Telangana, the youngest state. In the process, FFI wants to uncover Telangana’s gastronomic uniqueness.

The focus of FFI is to start a dialogue of foods and ingredients that have been shunned either because it is not presentable in a five-star set up or because we don’t want to discuss it. Garima strongly believes that no food should be laughed at. Her Michelin star chef status notwithstanding, she is like a student of food, such is the rapt attention with which she listens to details, putting each of the hosts feel at ease.

Apart from sampling toddy at a village near Medak and learning the traditional art of serving it, the team also visited the unit of Sai Bhaskar Reddy whose research work and achievements include designing 50 good stoves. “Visiting the Chenchu tribals and getting a taste of their food was something I experienced for the first time. It made me emotional to hear their stories of food. There is so much knowledge and care in what they prepare and consume, yet we look outwards to learn about healthy food,” adds Garima.

Towards the end of FFI’s research trip, there was a session of Urban Adda, complete with presentations and discussions exploring Telangana on tribal, rural and urban levels around some key ingredients, in a storytelling and inclusive dialogue format.

Among the speakers Aparna Pallavi who spoke about her research on Mahua followed by a quick recipe demonstration. Then Sai Bhasker Reddy shared his stove journey which followed eating fresh bajjis by Lakshmi made on a stove modelled on his innovation. As Lakshmi was the first person who agreed to use the stove designed by Sai Bhaskar, he named the stove model after her. Then there was a talk about millets by ‘Millet Sisters’ of Deccan Development Society. Babu Rao of Niloufer Cafe shared his journey over cups and cups of irani chai. Another speaker spoke about introducing traditional eating habits to the present generation to preserve the habits. #KhabarLive