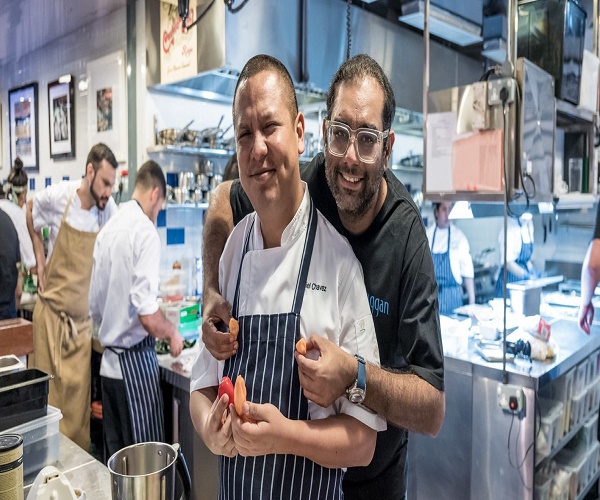 Gaggan Anand and Andre Chiang are closing, or have closed, their flagship restaurants at the peak of their careers, in pursuit of something more.

The prestigious list of Asia’s 50 Best Restaurants is released each year, with thousands of chefs jostling for a coveted spot. For the past three years however, Bangkok-based modern-Indian restaurant Gaggan has settled down and set up home at the No.1 slot. The crown sits crooked on the head of Kolkata-born chef Gaggan Anand, who has a personality as memorable as his food.

Rockstar-meets-culinary maestro, if there ever was one, Anand pushes boundaries and even has diners lick up their plates in one of his courses, to bring in a sense of madness and fun to dining. The restaurant is always packed with a regrettable waitlist for months altogether.

I once had the pleasure of being served by him at a special-edition dinner in Delhi. I mentioned to him that I was visiting Bangkok the week after and would definitely drop in for dinner at the restaurant. He looked at me incredulously and asked, “But have you made a reservation?” And that was my introduction to a new world where people travel for food and reservations are as precious as a four-leaf clover.

The No. 2 position goes to the only Chinese-origin chef in this list, Andre Chiang. Though he was born in Taiwan, Chiang spent his formative years in France and returned to Asia only 10 years ago when he felt the need to go closer to his roots.

The launch of Restaurant Andre coincided with the opening of Marina Bay Sands, an iconic Singapore landmark, which brought global spotlight to the island and led to his restaurant being reviewed in The New York Times only two months after launch.

The journey upwards was swift and clean, and much like Bruce Lee, whom he is compared to often in the food world, he rose to the pinnacle of success annihilating competition with clean blows. Restaurant Andre too has been notoriously difficult to dine at, with reservation waitlists overflowing into three months.

Two artists, different as chalk and cheese, both at the peak of their career, helming restaurants that have been awarded two Michelin stars each. What do they have in common? The tiny fact that they both recently announced the closure of their incredibly popular restaurants.

Yes, Gaggan will cease to exist in 2020 and Restaurant Andre served its last table about two weeks ago, on 14 February. These individual announcements have taken everyone by surprise and sent shock waves in a world where they are regarded as heroes. So, what brought this about?

As Chiang put it when I asked him why he would shut at the peak of the restaurant’s popularity, he likened a restaurant to a painting. You start with a blank canvas, and slowly choose your colours and create something new. Day in and day out, you tweak it a little bit here and a tad bit there until one day, you decide that the masterpiece is “complete”. You could hold on to that painting forever and bask in its glory, or you sign the canvas, put the painting on the side and start again from scratch.

Anand mirrors these sentiments too. In his words, “To rise again, you always have to head back down and go up. One can’t possibly jump from one mountain to another.”

It has to be more than a coincidence that both chefs agree on a 10-year life cycle. Anand believes that by 2020, the restaurant would have completed 10 years and would have given its all. It is not that he is sitting around idle in the meantime, though. With interests in various ventures, he has many projects on and promises to keep cooking and evolving his food.

For Chiang, it is more of a way of life. “Every 10 years, I get restless”, he shares. “I look at my life and think of how to shake it up. Complacency is not something I can live with. 10 years back I moved to Singapore from France, and now the time has come to go back to my motherland, to Taipei.”

Recently awarded a Michelin star, the only hawker in the city to get one, Jay Fai is reportedly contemplating returning the honour. Since the announcement, the tiny stall in Bangkok where 72-year-old Supinya Junsuta cooks each dish on the wok herself, donning ski goggles to avoid oil splatter, has been inundated with diners flocking by the dozen. The restaurant has been forced to implement a reservation system, which it previously shied away from.

Jay Fai is not too amused by tourists who are more interested in taking photographs than in the flavours of the food itself. The unmanageable crowds have swelled to such a degree that her daughter had to quit her job and join her mother and sister at the stall full time.

ALSO READ:  The 'Secret Food Menu' From The Royal Nizam's Kitchens Of Hyderabad

“There is always good pressure and bad pressure,” muses Anand. “Good pressure forces you to keep getting better and better. But the downside is that you forget to enjoy the journey of it.”

In his statement announcing the impending closure, Chiang respectfully returned his two Michelin stars and also requested that his Taipei restaurant, RAW, which is what he will focus on now, not be included in any future Michelin guides if they were to launch in Taiwan.

“These accolades do not allow you to grow naturally. They push you to create a sense of perfection and stand still at that point. I want to nurture RAW and let it transform gently until I believe it is ready,” he says.

Diners often crib about meals at such restaurants costing an arm and a leg (and a kidney too). Ranging easily from $200 to $800 per person, this is far more than what an average person is comfortable paying for a meal. Agreed that what you get here is more than a meal, it is an experience. But does that still justify the rates?

I once posed this question on Twitter and triggered a passionate discussion, with many Michelin-starred chefs joining in the fray. “If the world’s greatest chefs cooked for a living, they would starve”, it is famously said. In that Twitter free-for-all, Anand and chef Atul Kochhar spoke about how expensive fine ingredients are. And if you heard the price of a single truffle, you may be inclined to agree.

But there is more to the story here. El Bulli (ranked World No. 1 and awarded three Michelin stars) ran in losses for years, yet continued to serve guests only six months in the year and only for dinner. They reportedly received 800,000 reservation requests for their 48-table restaurant, which only could seat 8,000 tables in the entire season.

Would the restaurant have made more money if it stayed open all year round and served lunch too? Absolutely. Could they have raised the price from their €250 per head and still filled those tables? Without a doubt. So why did they not?

It may partly be explained by chef Ferran Adria’s passion that he needed that time out to reinvent and raise the bar higher each season, thus treating the restaurant like a laboratory. But the truth is also that keeping the prices affordable enough to entice more and more people to know about the El Bulli brand allowed him to create a series of businesses that fed off this brand, each of which made (and continue to make) a lot of money.

ALSO READ:  Khichdi, Pongal, Undhiyu, Peetha - What Are You Eating This Winter?

In an ever-changing world, the diner is evolving at a rapid pace too. Ten years ago, people did not travel much for leisure. Fast forward to today and many are willing to go overseas, only to dine at a particular iconic restaurant. This also implies that the diner is more sophisticated and demands that chefs re-invent rather than recreate.

To cater to such an audience, restaurant owners and chefs feel the need to be nimble and to constantly ask themselves—what next?

It may have held true for Spiderman but legendary chefs like these are no less than superheroes either. Anand believes that as you climb the ladders of success, you increasingly feel the need to nurture and develop talent and make place for others to grow.

This is one of the main reasons that Chiang has decided to go back to the cradle, his homeland Taiwan. He believes that there is immense talent in the kitchens there but there is a need for that talent to be moulded and he must play his role in this.

Two years ago, in a heart-to-heart conversation Massimo Bottura told him that he felt proud of where Andre had reached, but he also was aware that Andre is the only Taiwanese chef at that level. This touched him deeply and he felt a deep sense of responsibility, the need to give opportunities and share his knowledge with those who have not been exposed to how the food world is growing around the world.

El Bulli, Gaggan and now Andre. Iconic restaurants that each left a distinct mark in this world. Restaurants that are spoken about in respectful hushed tones, some even years after they shut their doors. The closure of these restaurants at the peak of their popularity may be attributed to many factors. But the true genius lies in the men who created them.

Men who sought and eventually attained perfection in their creations, but more importantly, had the courage to walk away from their masterpieces towards nothing but a blank canvas. Shedding their egos along the way and taking along merely their colours and enviable talent. #KhabarLive