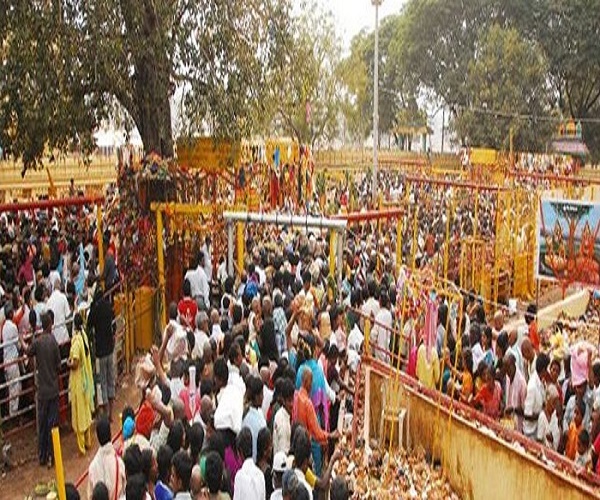 Medaram Jatara is popular as the biggest tribal Jatara in south Asia. This is a huge congregation of people of all categories including the majority of tribal people of Telangana, Maharashtra and Chhattisgarh. Held once in two years, the Jatara reflects the lifestyle and culture of the tribal community. It is also popularly called as “Sammakka, Saralamma Jatara” and is held at Medaram, a tribal village of old Warangal district, about 110 kilometres from Warangal.

The Legend
About nine centuries back Sammakka and Saralamma attained immortality by facing a war with the mighty army of Kakatiya Rudra to protect the rights and values of tribal people. In their memory, the tribal community started praying them in Medaram village in the interiors of thick forest on Magha Sudha Pournima once in two years. Sammakka and Saralamma are mother and daughter. Pagididharaju is the husband of Sammakka.

As the devotees treat Sammakka and Saralamma as martyrs, there are a number of legendary stories in circulation. There is a strong belief that Kakatiya army waged a war against Pagididharaju, subordinate ruler of Kakatiya Rudra for Medaram Pergana for not paying the kappam (taxes) for years. In legends, it is said that Sammakka and Saralamma died in the war or they ran away towards Chilukalagutta with oozing blood from the wounds after the war.

In another legend, it is said that the mother and daughter sacrificed their lives on the funeral pyres of their husbands, Pagididharaju and Govindaraju. It is also said that Pagididharaju and Sammakka had two daughters, Saralamma and Nagulamma and one son Jamppana but there is no evidence of any kind except local legends.

Somehow, the general acceptance by the historians is that there was a war in Medaram area during the reign of Kakatiya Rudra (1158-1195 AD). He was also popular by the name, Prathapa Rudra I. It is said that Kakatiya Rudra sent his armies under the command of his senadhipathi, Gangadhara to Medaram Pargana as the subordinate ruler, failed to pay the kappam (taxes) for years.

The tribals lead by Pagididharaju and Sammakka could not stand before Kakatiya army and Pagididharaju and his family perished in the war. There is no inscriptional evidence for the cause of the war. This reason in circulation is baseless as the ruler can call the defaulter to his court and punish him by putting him in jail till the dues were cleared.

There is also one version that Kakatiya Rudra attacked Medaram Pargana to expand his kingdom. In fact, Medaram Pargana had become the part of Kakatiya kingdom when Prola II had attached this area to his kingdom after his victory in the war held between 1138 and 1141 AD, in which Polavasa ruler Medaraju II ran away into forests and his brother Gundaraju, ruling Manthra Kuta area was killed.

The inscription of Anumakonda, thousand pillar temple reveals an important aspect of this war. It describes the defeat of Polavasa Medaraju II in the hands of Kakatiya Rudra. It says that Medaraju of Polavasa lost his prosperity, proudness and family prestige because of his refusal to surrender and give his daughter to Rudra under the settlement. We can assume that the issue of nonpayment of kappam popularised more than the real history of Sammakka, daughter of Medaraju II.

Billama of Kalachuri vamsha who became the political heir of Kalyani Chalukya kingdom, during the reign of Tailapa III sent his army under the control of his son Mailagi to take control of Kakatiya Rudra. Dommaraju of Nagunuru and Polavasa Medaraju II who were having enmity with Rudra wanted to avail this opportunity to support Mailagi to avenge.

It is assumed that this war had taken place in between 1159-1163 AD. In the Anumakonda inscription, it was said that Rudra foiled the attack of enemy front formed by Mailagi, Medaraju II and Dommaraju. In this war Dommaraju was killed, Polavasa Medaraju II was forced to flee into the forests and Mailagi too was made to run away to his capital, Kalyani.

Probably at this point during the war Rudra might have put his proposal to Medaraju to accept his defeat and give his daughter, Sammakka to him. His refusal to offer his daughter to Rudra by accepting the defeat had become a burning issue to Rudra which led to a revengeful attack on Medaram in the later year when he came to know that his subordinate Pagididharaju married Sammakka.

The roots of Polavasa rulers are revealed through the Govindapuram inscription of 1122 AD. As per this inscription, the founder was Madhava Chakravarthi or Madhavavarma and next ruler was Duggaraju.

Kakatiya and Polavasa rulers were of the same stature and both were senanies under Rastrakutas. Both rulers agreed to support the Kalyani Chalukyas after Rastrakutas defeat in 973 AD. Kakatiya Prola II (1116-1157 AD) and Polavasa Medaraju (1116 -1159AD) were Mandaleswaras under Kalyani Chalukyas. In the geographical area, Polavasa kingdom was almost double to the Kakatiya kingdom.

The Anumakonda thousand pillar temple inscription of 1163 AD, inscription of Rudra’s minister, Gangaadhara mentioned an important aspect which was the root cause of the later war held at Medaram with Sammaka family. It mentions that Medaraju II has lost his wealth, pride and family prestige due to his refusal to accept his defeat and give his daughter to him under the settlement. Legendary Sammakka is Medaraju’s daughter. Her husband is Pagididharaju, subordinate to Kakatiya Rudra, ruling Medaram pargana.

By the critical study of the above three points, the following facts are coming to light. After Prola II, the enmity between Rudra and Medaraju II continued till 1159 AD and later. In the war fought between 1159-1163 AD, Nagunuru Dommaraju died; Medaraju II’s son Jaggadevudu died in the war. By that time Sammakka might be a young lady. Rudra might have sent a message through his minister, Gangadhara to Medaraju II to accept his defeat and give his daughter, Sammakka to him as settlement.

Medaraju II did not accept the settlement proposal and ran away into the forests with his family. Consequently, he has given his daughter to Pagididharaju of Medaram pargana. It is said that Pagididharaju was Medaraju’s sister’s son but there is no concrete evidence.

There is one more important political event which took place prior to Nagunuri-Polavasa war which reflects the intentions of Rudra with the defeated enemies. To expand his kingdom, Rudra attacked the Kingdom of Bheema Choda of Vardhamanapuram (Vaddemanu) and defeated him and married Padma, daughter of Udaya Choda II. In lieu, Bhima Choda was made his feudatory to rule Vardhamanapuram again. Rudra tried the same matrimonial experiment with Medaraju II and failed.

This led him to track Medaraju II and his daughter Sammakka in between 1159 AD afterwards till the Medaram war took place. The Anumakonda inscription of 1163 AD was installed in Chitrabhanu, Magha Sudha thrayodasi day. And the Medaram Jatra is also held on Magha Sudha trayodasi day, bi-annually. Now it is clear that the first Medaram war would have taken place at least one year prior to the Anumakonda inscription of 1163 AD.

Till date, no one tried to fix the timeline of the said war. To decide the time, two inscriptions available at present are helpful. One broken, undated inscription of Gangadhara, minister of Rudra found at Hanumakonda and another of Mucha-Nayaka of Prathapagiri fort in Karimnagar district near Godavari river.

Two important aspects are coming out of the broken inscription of Gangadhara. One point about the defeat of Medaraju was explained in detail and his refusal to offer his daughter to Rudra under a settlement and loss of his wealth, pride and family’s name.

Another point is that it reveals the defeat of the ruler Chitrakuta. This indicates that Rudra raided the northern part of Godavari river. It also reveals that the ruler of Chitrakuta had seized the bhiruda (title), Manyakhetakakara from Medaraju of Polavasa kingdom. An inscription available at Pratapagiri fort is very much helpful to identify this ruler of Chitrakuta. This inscription was laid in the year Keelaka of Saka calendar.

It is possible that the ruler of Chitrakuta described in Gangadhara minister’s inscription is the Muchchanayaka of Prathapagiri fort inscription. In those days Raddi senanies used to be called nayakas. One of the authors of this article, Buchi Reddy Avala had identified this Muchchanayaka as the Recharla Muchchareddy II, brother of Recharla Rudra Raddi who had constructed Ramappa Temple in 1213 AD.

The Keelakanama year will be 29 Years after Chitrabhanu (1163AD) of Anumakonda inscription of Kakatiya Rudra. So the Keelaka of Saka calendar will be equal to 1189 AD and by this year Chitrakuta king was alive. So the death of Chitrakuta king mentioned in the broken inscription of Gangadhara might have happened after 1189 AD and before 1195 AD, the death year of Kakatiya Rudra.

One more point to be noticed is that Rudra did not participate in this war. He sent his senior minister Gangadhara to lead the army to avenge the insult faced by him in the earlier war of Nagunuru-Polavasa. Rudra might have got the bad name due to the killing of Sammakka family and the tribals might have shown their anger.

It seems that to pacify the tribals, the Pakala inscription was laid to show his sympathies to the tribal people by elevating Sammakka and Pagididharaju to the level of legendary gods. Kakatiya Rudra ordered the people through his senani to celebrate the Jatara of Sammakka and pay tributes by offering Bandaram (Turmeric, Vermillion) and Bangaram (Jaggery) to her and her husband Pagididharaju.

The history of Sammakka has not been discussed in detail based on the inscriptional pieces of evidence till date. The number of articles in vernacular journals and newspapers were published based on the legendary stories. We, with respect to the legendary stories about Sammakka and Saralamma, made this effort to put on record the findings based on the inscriptions available at present. This is not an effort to disrespect the feelings of the people especially the tribal people of our state and neighbouring states. #KhabarLive