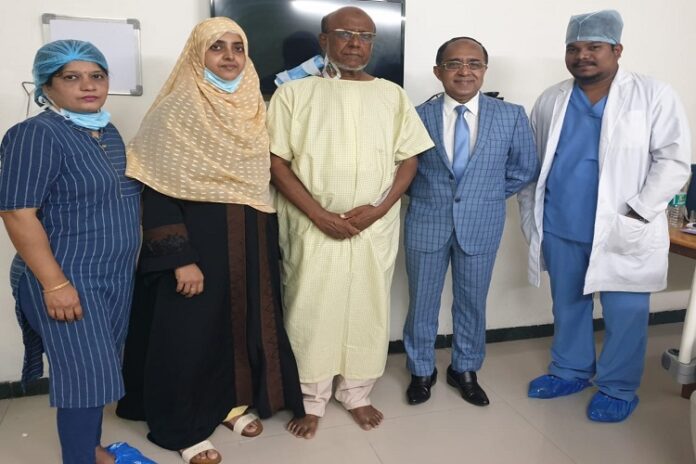 56 / 100
Powered by Rank Math SEO
In a rare and challenging surgery, Syed Ishaque, a 71 years gentleman successfully underwent a multiple bypass surgery operation under a team of doctors led by renowned heart surgeon Dr. Prateek Bhatnagar, Director Cardiac Surgery at CARE Hospital at Banjara Hills in Hyderabad.
Syed was Asia’s first “Live” liver donor for a liver transplant operation. He had donated his left lobe of liver for his elder brother in 1998, at a corporate hospital in New Delhi. According to Syed his pioneering liver donation surgery was also covered in Discovery Channel at that time.
After recovering from donating part of his liver, Syed had resumed his normal life. He was the Principal of a College in Akola, Maharashtra and is currently a CEO of an organisation running 14 institutions.
He himself developed heart disease a couple of years later. He next underwent stenting in his coronary arteries in 2000, 2010 and 2012 at Pune. A total of 6 stents were placed. He recently developed unstable angina. Coronary angiography showed multiple blocks in the stents, needing an urgent bypass surgery.
A multiple bypass surgery operation was done on 1st October, 2020 by Dr. Prateek Bhatnagar and his team using beating heart surgery with total arterial revascularisation.  No cuts were made on the legs. He had a smooth post operative recovery and was walking freely 2 days after his surgery and is being discharged today in an excellent condition. Dr. Prateek Bhatnagar informed that the main issue in this surgery was the liver function.
Keeping this in mind, Dr. Bhatnagar used the technique of beating heart surgery which he does in all his patients. Thus, open heart surgery was avoided and the entire bypass surgery was performed without stopping or cutting the heart.  Hence, during the entire surgery, liver received “Pulsatile” blood flow which optimised the liver function.
According to Dr. Bhatnagar there are quite a few salient features related to this surgery. Firstly, beating heart bypass surgery gives better protection to organs like liver in a post donor stage, as compared to open heart surgery, due to the pulsatile flow in beating heart surgery. Secondly, a patient can live a long life after donating part of his liver.
This should serve as a confidence booster for those who worry about donating organs, particularly liver. If a liver donor later develops complex heart disease, like in this patient, he can still undergo a high risk bypass surgery successfully with an experienced team of doctors.
Hence patients who have been organ donors should not hesitate from getting operated and getting their health back on track.  A timely and meticulously done bypass surgery is always useful for patients. Syed admitted on 30th September 2020 he got surgery performed on 1st October and discharged on 7th October 2020. #KhabarLive #hydnews
ALSO READ:  Re-Thinking Infrastructure Planning For Hyderabad In Telangana 2.0 Priority Agenda