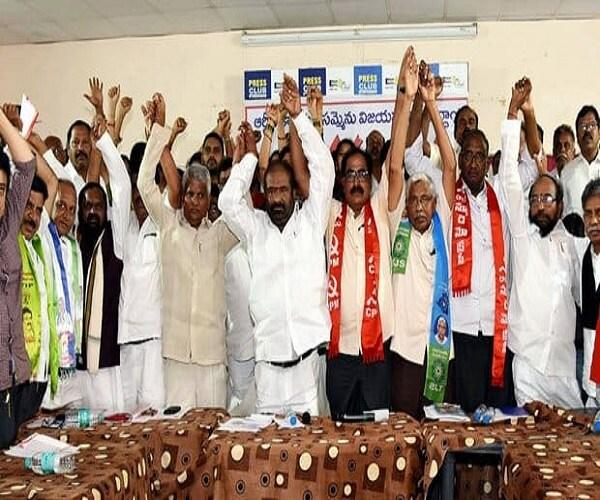 The only solace the striking Telangana State Road Transport Corporations (TSRTC) workers found in the Telangana High Court was the refusal of the court to declare the RTC strike as illegal. Instead, the High Court, fed up with all its efforts to settle the dispute between the state government, RTC management and the trade unions going in vain, decided to let the issue get adjudicated as per the provisions of the Industrial Disputes Act.

While disposing the five PILs seeking to declare the strike as illegal and to direct the state government to negotiate with trade unions, the division bench comprising Chief Justice Raghavendra Singh Chauhan and Justice A. Abhishek Reddy referred the matter to the labour court, the appropriate forum to decide the issue, besides taking a call on whether the strike was legal or not.

The High Court bench directed the commissioner of labour department to judge on the disputes that led to the strike, saying, “the labour court is the appropriate body to decide whether the strike is legal or illegal, justified or unjustified. It can also decide what will be the consequences once it pronounces the strike legal or illegal. However, the disputes and question of facts cannot be gone into by this Court,” the bench observed.

The Bench further directed the commissioner of labour to give reasons for not referring the dispute in writing and give reasons to the concerned parties. It also set a deadline of two weeks for the labour court to decide.

ALSO READ:  Numero Uno Hyderabad Is A Shining Star On India's IT Landscape

The bench suggested the commissioner of labour and the labour court to ignore the observation made by the conciliation officer, who observed that the strike was illegal.

Earlier, D. Prakash Reddy, senior counsel representing trade unions, requested the court to give direction to the corporation to take back striking workers without creating any hurdles, as they were ready to join duties and call off the strike.

Expressing concern over the plight of common man who continues to suffer since the strike started, with enough buses not running on roads, the court ordered the state government to ensure sufficient number of buses are made available for commuters.

Giving moral support to the workers, the bench said that neither the RTC nor government would be justified in deciding that merely going on strike has meant that workmen lost their jobs. Hoping the RTC and government should act as a model employer by recognizing that in case the worker is left out in the lurch, eventually his family that suffers from an economic debt,” the judges said. #KhabarLive