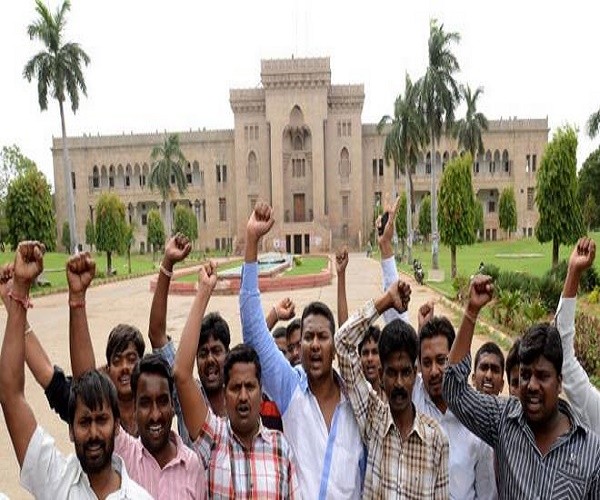 Osmania University in Hyderabad was the ground zero for the struggle for a separate state. Dalits students from the university, and across the state, played a crucial role in this struggle in the hope that the new state would give Dalits their rightful place.

But what followed was the government’s silence over caste killings, failed poll promises and the death of Rohith Vemula. As the KCR government finishes its first term, the Dalit students at Osmania say they feel let down.

“When we were fighting for the new Telangana state, we were hopeful that the new state will represent our dreams and aspiration. Nearly 1,000 students have died for this cause. We thought we will see our Bahujan Rajya and our people’s aspirations fulfilled. But the new government has utterly failed to meet the aspirations of the Dalits,” said Venkat, a research scholar at Osmania University.

One of the biggest shocks for the Dalit community in Telangana was the death of Rohith Vemula, a research scholar from Hyderabad University, who ended his life over caste oppression. Dondha Prashant, a friend of Rohith Vemula and one of the five students suspended along with Rohith, said he was among the many who thought that education and employment will be the two main agendas of the newborn state.

“However, what happened at Hyderabad University had completely defeated this purpose. What happened at University of Hyderabad was not an isolated incident. There was Sai Deepti, a student from Malkajgiri – she committed suicide because she couldn’t pay an examination fee. She was a Madiga, she was a Dalit,” he said.

Dr G Vinod Kumar, Director of SC/ST Cell, in Osmania University had a different take on the issue, he blamed the lack of unity among the Dalits and Bahujan, as the reason for the community’s inability to be a decisive political force.

“The Telangana election is nothing, but a fight between the Reddy and Velama communities (upper castes). The Velamas form only 0.5% of the population but the Dalit and Bahujan population here is close to 93%. How can we achieve power? By uniting our people. But the 93% are voting for the 0.5% to come to power,” he explained.

If the Dalits unite and form a political party, no else can come to power. But for this, a coming together of the parties is required, he signed off. #KhabarLive